A 28-year-old woman from Sudan who had lived for 9 years in Victoria, Australia, was diagnosed with falciparum malaria 2 months after splenectomy for massive splenomegaly of unknown cause. Chronic falciparum malaria can occasionally present years after leaving endemic areas in partially immune patients. It should be considered in such patients with presentations possibly related to malaria, including splenomegaly, anaemia, or a long history of intermittent fevers and chills.

Infection with Plasmodium falciparum is well known as a cause of acute malaria among travellers from endemic areas, such as Africa and South-East Asia. However, chronic infection persisting for months may occur in endemic areas among those with a degree of partial immunity, and cases have been reported in people who left an endemic area up to 5 years previously.1,2 We report a case of falciparum malaria recurring 9 years after the patient migrated from Sudan to Victoria, Australia. The anopheles mosquito vector does not occur in this region of Australia and, if imported, is unlikely to survive for long. The patient initially presented with fever and massive splenomegaly, and the diagnosis of malaria was made after a splenectomy had been performed.

A 28-year-old woman from Africa who had been living in Australia for 9 years presented to the emergency department with a one-week history of fever, rigors, abdominal pain, nausea and vomiting. She had no abnormalities on physical examination, apart from mild dehydration, and was discharged with a presumptive diagnosis of viral gastroenteritis.

The next day, she presented to the gastroenterology outpatient clinic. Malaria was considered in the differential diagnosis, and she was admitted for further investigation and treatment.

Past history: The patient was born in Eritrea and lived there for 6 years, followed by 12 years in Sudan, before migrating to Australia. She had had multiple episodes of malaria while in Africa, but could not recall exactly the drug therapy she received. In Australia, she experienced multiple episodes of nausea, abdominal pain and fever every 3 to 6 months, almost identical to her previous episodes of malaria. Although thick and thin malaria blood films were performed during each of these episodes in Australia, a diagnosis of malaria could not be confirmed.

Computed tomography and ultrasound examination of the abdomen demonstrated massive splenomegaly (17 cm) and hepatomegaly (15 cm), with no radiological evidence of portal hypertension. Laboratory studies demonstrated anaemia and neutropenia consistent with hypersplenism. The platelet count could not be measured because of clumping (Box 1). She was treated with praziquantel, but continued to have episodes of abdominal pain and anorexia.

Two months before current presentation: Because of these continuing episodes, as well as haematological evidence of hypersplenism, splenectomy was performed after appropriate vaccinations. Repeat thick and thin films before the splenectomy were again negative for malaria, although an immunochromatography card test (ICT) for malarial antigens was not performed. Initial histological examination of the spleen revealed only congestion and some mononuclear-cell infiltration.

Current presentation: The patient had not travelled to a malaria-endemic area since arriving in Australia 9 years previously, nor had she been near an airport in the preceding 6 months. Results of haematological and biochemical tests are shown in Box 1.

A rapid ICT for malaria antigen was performed (NOW ICT Malaria P.f/P.v. Test, Binax Inc, Portland, USA) and was positive for falciparum malaria (Box 2). The patient was admitted to hospital, and treatment begun with intravenous quinine (600 mg three times daily), as recommended for this form of malaria.

The following day, thick and thin blood films were reported as showing 0.5% malaria parasitaemia. Parasite morphology, along with the prolonged period between the last possible exposure to malaria and illness, was considered consistent with Plasmodium malariae infection. Treatment was changed to oral chloroquine (620 mg initially, followed by 310 mg 6 hours later and on Days 2 and 3).

Because of the conflicting results of the blood film and ICT test, polymerase chain reaction (PCR) tests for malarial antigens were performed at the Victorian Infectious Diseases Reference Laboratory and at the Institute of Clinical Pathology and Medical Research, Westmead Hospital, Sydney, NSW. Results of both tests a month later confirmed P. falciparum as the causative parasite. Further expert review of the blood film showed features consistent with P. falciparum (Box 3).

Progress and follow-up: The fever, vomiting and abdominal pain resolved rapidly, and the patient was discharged after 3 days in hospital. After the positive PCR result for P. falciparum, she was treated again, as an outpatient, with atovaquone plus proguanil (1000 mg and 400 mg, respectively, daily for 3 days). Two weeks after completion of therapy, thick and thin films were found to be negative for malaria parasites. Serological tests for human immunodeficiency virus, hepatitis B and hepatitis C were all negative.

A stored blood sample that had been taken 7 months before the current presentation was tested and found to be positive for malaria antibodies (immunofluorescent antibody titre, 160 [positive, > 20]). Further review of the computed tomography scan performed before splenectomy showed no features of chronic liver disease, and detailed histological review of the spleen again demonstrated congestion and a lymphocytic infiltrate (compatible with hyperreactive malarial splenomegaly), but no malarial parasites or pigment.

At 6-month review, the patient reported no further symptoms. Screening of her children and husband for malaria (by thick and thin blood films and ICT) and schistosomiasis (by indirect haemagglutination assay) gave negative results.

This case is notable because of the prolonged period (9 years) between the last possible exposure to malaria and the diagnosis of falciparum malaria, which was confirmed by PCR. Although it is well recognised that P. malariae infection can persist for many years,3 to our knowledge the longest previously reported delay between exposure and subsequent diagnosis of falciparum malaria is 5 years. In that case, the patient donated blood 5 years after leaving a malarious area, and was found to have falciparum malaria on testing after the recipient of the blood transfusion developed malaria; details in the report are limited.2 Recently, mathematical modelling was used to estimate the duration of P. falciparum infection after interruption of transmission.4 The authors estimated that the maximum duration of infection was about 4 years.

Chronic falciparum malaria may occur in people who have lived in endemic areas and have developed partial immunity to the malaria parasite, resulting in low-grade parasitaemia.5 Antimalarial antibodies have been detected in high titres in such patients.6 Massive splenomegaly, now termed “hyperreactive malarial splenomegaly syndrome”,7 is a manifestation of chronic malaria. The demonstration of malarial parasites after splenectomy in patients not recently exposed to malaria raises the possibility of this syndrome.8 Major diagnostic criteria include:

Our case highlights the fact that malaria may still present a major diagnostic challenge. In hindsight, it was likely that our patient had hyperreactive malarial splenomegaly syndrome. Use of other diagnostic tests, including PCR, before splenectomy might have enabled a trial of antimalarial treatment and possibly averted the need for surgery.9

Although thick and thin blood film examination using Field or Giemsa–Wright stain is the established “gold” standard for malaria diagnosis,11 repeated appropriate blood films in our patient before splenectomy were negative. An experienced laboratory can achieve sensitivity of 50 parasites/μL blood (0.001% red blood cells infected), but a survey of UK laboratories found that most achieved sensitivity of 500 parasites/μL blood when compared with a reference laboratory.12

As this case demonstrates, the new, more sensitive ICT card tests can be valuable in difficult-to-diagnose cases of P. falciparum infection. These tests detect circulating P. falciparum histidine-rich protein 2 (HRP-2) in whole blood and provide an immediate result, with sensitivity of 77%–98% and specificity exceeding 95% for falciparum malaria, correlating with counts of 100–300 parasites/μL blood.13 Other ICT kits that detect different antigens are available and can detect all four Plasmodium species.13

Although the sensitivity of these rapid antigen tests is good, a negative result does not exclude malaria. PCR techniques are even more sensitive, detecting levels as low as 5 parasites/μL blood,14 and are available on special request at reference laboratories around Australia. PCR can detect the specific plasmodial species and is therefore useful when morphological diagnosis is difficult, or when clinical suspicion warrants further attempts at diagnosis despite negative results from blood films and ICT.

A recent study in Sudan showed that P. falciparum can survive for months in human hosts during the 9-month dry season, when no transmission occurs.5 Many people had ongoing PCR positivity for falciparum malaria, despite having levels of parasitaemia below the threshold for detection on thick and thin blood films. This phenomenon was demonstrated by our patient, whose blood films were repeatedly negative over years. However, splenectomy may unmask underlying chronic P. falciparum infection sufficiently to allow detection of parasitaemia on blood films.15

Chronic falciparum malaria should be considered in the differential diagnosis in patients from endemic areas presenting with symptoms possibly related to malaria, even years after their last possible exposure. Although thick and thin blood films remain the standard laboratory investigation, the relatively inexpensive and more sensitive malaria ICT card test should be a routine adjunct to blood films to detect P. falciparum. PCR testing may be warranted before excluding chronic malaria as the diagnosis. 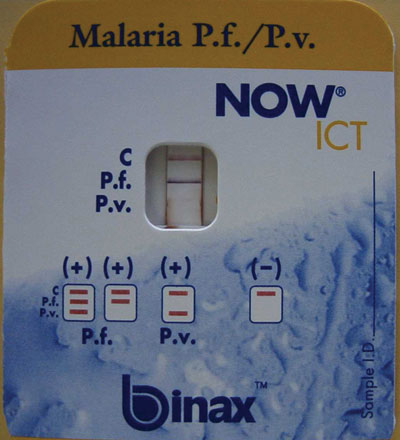 Positive result for Plasmodium falciparum on immunochromatography card test (ICT) in our patient. The card test is performed on whole blood and gives a result within 10 minutes.

3 Thin blood film from the patient 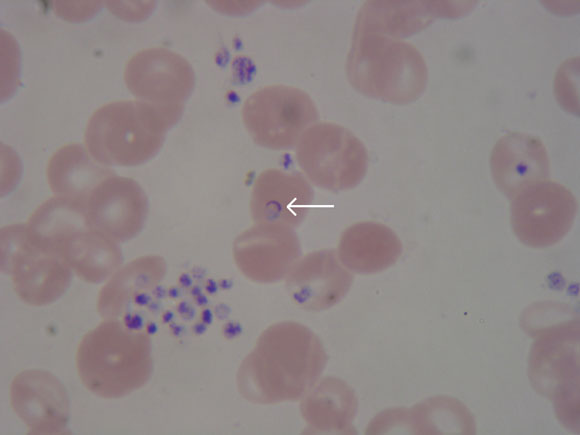 The ring form of Plasmodium falciparum (arrow) is apparent in a normal-sized red blood cell.