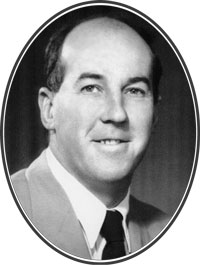 Bill Young was born in Adelaide on 9 February 1917. After his secondary education at Carey Baptist Grammar School in Melbourne, he worked for the Commonwealth Bank.

In 1936, his aunt, Dr Helen Young, herself a Harley Street specialist, wrote offering to support him to study medicine at St Mary’s Hospital, London. Within 3 days, he had paid £30 for his passage and was en route to London. He graduated in medicine from the University of London in 1943.

After service in the Royal Navy during World War II, Bill gained a Diploma of Public Health from the University of Manchester in 1947. He returned to Australia in the same year with his wife, Dr Mary Young, and their family. They settled in Hobart, where he and Mary were in general practice together from 1948 to 1987.

In addition to full-time general practice, Bill was Medical Officer of Health for both the City of Hobart and the City of Clarence, and was a member of the Medical Council of Tasmania for 34 years, the last three as President. He played a key role in establishing the Medical Benefits Fund, serving on its Council from 1952 to 1987. Bill was a Liberal member of the Tasmanian House of Assembly from 1959 to 1969, including a period as shadow Health Minister.

For many years Bill was in the Royal Australian Naval Reserve, retiring in 1972 with the rank of Surgeon Commander. He served in the Korean War and was District Naval Medical Officer in Hobart from 1951 to 1972.

Bill was a very good sportsman and excelled in his youth at swimming, water polo and rugby, winning swimming medals at the World University Games and playing rugby for the UK international invitational team, the Barbarians. In Hobart, he contributed his time and skills to a number of community and sporting organisations.

Bill was respected by his patients and colleagues as a skilled, compassionate, practical and down-to-earth doctor. He was very gregarious and a wonderful host and derived great pleasure from his large family. A man of great energy and initiative, with exceptional organisational skills, he made a substantial contribution to his profession and to the community. In 1987, he was made a Member of the Order of the British Empire in recognition of his service to the community and to public health.

The last years of Bill’s life were devoted to caring for his wife in her final illness. He died in Hobart on 19 November 2003 after a short illness. He is survived by his seven daughters and their families.