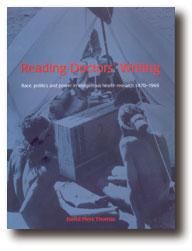 The concept of Aboriginal people being research subjects because they were considered to be more primitive was pervasive, and this belief led to a variety of wider paternalistic and repressive policies. In 1961 Sir Paul Hasluck, then Federal Minister for Territories, felt obliged to write that I myself am not disposed to direct that wards can be sampled like a herd of cattle[.] Personal willingness of native people to assist is essential. This statement is an interesting reflection on the tenor of the times.

The sad part of all of this is that, with few exceptions, little research appears to have been done in that period with the explicit aim of helping to improve the health of Aboriginal and Torres Strait Islanders. Most researchers reflected the prevailing mood, but there were occasional exceptions, continuing the tradition of individual doctors arguing for a wholly different viewpoint against the mainstream, and perhaps with more than a little effect.

There is much in this book for those with an interest in doctors role over a 100-year period in one of the major unresolved issues in Australian public health.