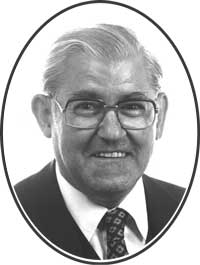 The Pope, a former state premier, actors and sportspeople can testify that Parkinson’s disease is no discriminator. Alan Nicholson died on 18 October 2004, following his own courageous battle with the disease. He was born on 8 March 1930 in Melbourne.

Alan graduated from the University of Melbourne in 1956. After Resident Medical Officer appointments in Melbourne, he trained as a psychiatrist at the Ballarat Mental Hospital, established to relieve overcrowding at the Kew Asylum in Melbourne. He obtained a Diploma in Psychological Medicine in 1961, and in the same year became a member of the Royal College of Psychiatrists of London and a Fellow of the Australian and New Zealand College of Psychiatrists. Alan’s first appointment as a specialist was to the Larundel Psychiatric Hospital in Melbourne, then in 1967 he was appointed to Ballarat Base Hospital, where he continued to work until illness forced him to retire in 1995.

When Alan embarked on his career as a psychiatrist in 1959, the practice of psychiatry was a world apart from the way it is practised today. Alan was fortunate to have entered psychiatry in Victoria during the “Daxian” years. This period saw the advent of the Mental Hygiene Authority, later the Mental Health Authority, chaired by Dr Eric Cunningham Dax, and, with it, major changes to the care of people with mental illness and the education and training of the staff who looked after them.

Alan played a significant role in the Professional Staff Group of the Ballarat Base Hospital and was the Group’s chairman in the early 1980s. As chairman, Alan oversaw the introduction of a credentials committee for doctors practising at the Base Hospital. This was a new and major influence on the practice of medicine in Ballarat. The smooth introduction of the committee was due to Alan’s stewardship. An example of his foresight and good judgement was his striving for at least a common liaison member, if not a combined committee, between the Base Hospital and St John of God Hospital in the interest of avoiding duplication and promoting the interrelationship of medical practitioners in the city.

Alan also played a significant role in the Australian Medical Association and was Honorary Secretary of its Ballarat subdivision for many years.

Apart from his medical work, Alan is remembered as an avid and expert collector, particularly of stamps, old banknotes, antiques and wines. He was an enthusiastic member of the Ballarat Wine and Food Society, serving on its committee and as its President and Cellar Master. Alan had the rare honour of being a member of several international wine and food societies. He was also a member and President of the Board of Sovereign Hill, Ballarat’s renowned reproduction of a goldfields township.

Alan is survived by his wife Jane and their five children, two of whom are doctors.