3. Management and prevention of obesity and its complications in children and adolescents

Behaviour change involving the whole family is more likely to be successful.

Current estimates in Australian children and young people indicate that 20%–25% are overweight or obese. The 1995 National Nutrition Survey found that 4.9% of boys and 5.4% of girls were obese, and two other studies in 1997 (the New South Wales Schools Fitness and Physical Activity Survey, and the Health of Young Victorians Study) gave similar results.3 There is also evidence that, between 1985 and 1995, the rates of overweight have doubled and those of obesity have trebled.4

Definition of overweight and obesity

An Australian expert working group has identified body mass index (BMI) as the most appropriate measure of excessive weight in children. BMI is calculated by dividing the weight (kg) by the height squared (m2).

Rapid changes in BMI occur in normal growth, and BMI varies with age and sex. It rises in the first year of life, then falls during preschool years, before rising again into adolescence. The point at which BMI starts to rise again (usually around 4–6 years of age) is termed “adiposity rebound”. Thus, calculated BMI values need to be compared with age and sex reference standards. For clinical use, the expert working group has recommended the BMI-for-age percentile charts developed in the United States by the National Center for Health Statistics in collaboration with the National Center for Chronic Disease Prevention and Health Promotion.5 These can be downloaded from the Centers for Disease Control and Prevention website (for boys 2–20 years: <www.cdc.gov/nchs/data/nhanes/growthcharts/set1/chart16.pdf> for girls 2–20 years <www.cdc.gov/nchs/data/nhanes/growthcharts/set1/chart16.pdf>). BMI greater than the 85th percentile suggests overweight, while BMI greater than the 95th percentile suggests obesity. These charts can be used in clinical practice to monitor progress.

Several studies have shown that there is a strong genetic basis to the development of obesity. Obesity appears to be a polygenic disorder, with many genes currently linked or associated with a predisposition to excess adiposity.6 At least five single-gene mutations causing human obesity that present in childhood have been identified. These are rare and all are associated with severe and very early onset obesity, and should prompt referral for further assessment.

Sedentary behaviour: Physical inactivity is a major element in the development of obesity in westernised societies — in children and adults alike. International studies have shown that television viewing is associated with an increased incidence of new cases of obesity, as well as with a decrease in success rates for obesity intervention.7 Television viewing exposes children to food marketing, increases opportunities for snacking on high-energy foods and drinks, decreases opportunities for physical activity, and reinforces sedentary behaviour. There are as yet no clear data linking viewing of interactive videos, or using computers or other electronic media, with the development of obesity, although they are likely to be associated.

Dietary intake: The increased prevalence of obesity in recent decades may have partly resulted from an increased consumption of high-fat foods or sweetened drinks, although the evidence for a clear effect of diet is not strong. In young children, parental influence on food selection is strong. In older children and adolescents peer influence is also important. Less desirable meal patterns, such as frequent snacking, also appear to be related to established obesity.

Other risk factors for obesity in childhood and adolescence include:

Childhood obesity is a chronic paediatric disease with possible immediate and long-term complications involving many body systems (Box 1). The National Health and Medical Research Council (NHMRC) Clinical practice guidelines for the management of overweight and obesity in children and adolescents13 provides a comprehensive review of the complications of childhood and adolescent obesity. We will briefly discuss insulin resistance and type 2 diabetes, and steatohepatitis.

Non-alcoholic steatohepatitis (NASH) was first described in 1979 in adults. NASH also occurs in childhood, but is less well characterised. Liver biopsies from obese prepubertal children with NASH may show fatty change, inflammation and fibrosis, with progression to necrosis and cirrhosis.15 Most cases of paediatric NASH are described in older children and adolescents. Elevated serum transaminase levels should raise suspicion of NASH in an obese child or adolescent. If NASH is suspected, referral to a centre specialising in the management of childhood obesity is recommended.

Assessment of the obese child and adolescent

The decision to further investigate obesity should be based on a combination of adiposity (BMI percentile), presence of complications and other risk factors (including family history and lifestyle factors), and the family’s and young person’s willingness to undertake lifestyle change (Box 3 and Box 4).

Established obesity in children and adolescents has proven difficult to treat. A recent Cochrane review of the management of obesity in children and adolescents has shown that there are a limited number of randomised controlled trials.20 Common strategies in the treatment of paediatric obesity for which there is at least some evidence are given in Box 5. 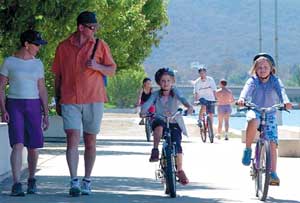 Treatment programs for obesity should take into account the influence of the child’s family on food choices and level of physical activity. Studies on long-term maintenance of weight loss have shown the importance of altered food habits within the whole family, support for the child, and parental praise for changed eating behaviour and physical activity.21

Treatment of preadolescent obesity with parents as the exclusive agents of lifestyle change appears more effective than targeting the child alone.22 There has been some success with separate sessions for adolescents and parents and structured programs flexible enough to allow input from adolescents.23 There have even been short-term positive outcomes with a phone- and email-based program for adolescent weight management.24

There is some concern that rigid restriction or control of a child’s food intake may trigger disordered eating or, in the young child, reduction in linear height growth. Less prescriptive, lower-energy diets are now used, with an emphasis on all members of the family moving to healthier eating patterns.25 The aim is to provide a flexible program to help the family and the child to make sustainable changes in food choices and eating habits. In general, dietary interventions should emphasise energy reduction, lower-fat food choices, increased vegetable and fruit intake, healthier snacks and decreased portion sizes. Water should be used as the main beverage, and drinks with high sugar content, including soft drinks and fruit drinks, should be limited. The effect of these interventions should be a reduction in total energy intake by reducing the energy density of the diet. Changes in eating habits, shopping practices and types of food for the whole family will support a child’s ability to self-regulate his or her food intake.

Levels of evidence (I–IV) are derived from the National Health and Medical Research Council’s system for assessing evidence.35

Enhanced physical activity (both planned and incidental/lifestyle) is an important component of weight management programs for obese children, although, as with dietary intake, there is no evidence as to the most effective physical activity prescription. In a study of the long-term effectiveness of physical activity interventions, the lifestyle exercise group maintained better weight than the programmed exercise group.26 There is some evidence that a reduction in sedentary behaviour is an effective component of a weight management program for obese children.27

Several types of interventions have been used to treat childhood obesity: individual counselling sessions, group programs, and sessions given by different types of healthcare professionals.2 Interventions have been conducted in different settings, including primary care, community health centres, tertiary institutions and holiday camps. There is some evidence for the effectiveness of group programs, holiday camps and email- and phone-based behavioural interventions.24

In general, very low calorie diets, whether they involve normal food items or non-food substitutes, produce rapid weight loss in adolescents. This may be of benefit when there is significant medical comorbidity, but should be conducted in a specialised centre.13 Very low calorie diets are never indicated for children. 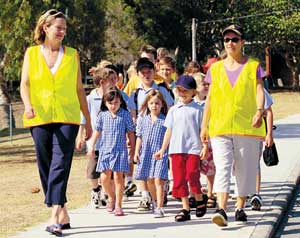 A recently published Cochrane review of interventions for preventing obesity in children concluded that there are “limited high quality data on the effectiveness of prevention programs”.33 However, the published studies do highlight the potential of combining a reduction in sedentary behaviour and an increase in physical activity, as well as the utility of a school-based setting.

The randomised-controlled-trial approach may be inappropriate for large-scale or comprehensive obesity-prevention studies. New approaches to assessing the effectiveness of “real world” obesity-prevention interventions are being developed. Several community-based interventions aimed at preventing obesity and incorporating such approaches are currently under way in a number of countries, including Australia and New Zealand.

At the macroenvironmental level (ie, beyond the sphere of influence of individuals) factors affecting dietary intake and physical activity include food production, importation, marketing and distribution; urban and rural development (town planning); transport systems (public transport); and health systems. Assessing the environment of a given community using this framework indicates the opportunities for preventive strategies. As yet, there are few successful examples of multifaceted, large-scale interventions to guide obesity-prevention programs. Such interventions need to be supported by adequate resourcing and significant community ownership.

1 Complications of obesity in children and adolescents

Acanthosis nigricans — a thickened, pigmented skin lesion in flexures and on the dorsum of hands — is associated with insulin resistance.

3 Assessment of the obese child or adolescent

4 Assessment and management of the obese child or adolescent

A mother brings her 5-year-old daughter to you because of concerns about the girl’s significant overweight. The girl is an only child who lives with her mother and maternal great-grandmother and has no contact with her father.

The mother’s pregnancy was complicated by gestational diabetes and hypertension. The child’s birthweight was 3.7 kg.

The child’s past medical history has been unremarkable, apart from mild asthma (currently not requiring treatment). The mother has made some unsuccessful attempts to modify the child’s dietary intake over the past two or more years.

The girl is in pre-school and has swimming and judo lessons each week, but otherwise plays quietly on her own as no playmates live nearby. She does not watch much television, although the TV is on while the family eats.

Her dietary intake includes three serves of fruit juice per day, a large-size serve for the evening meal, very few vegetables and some high-fat snacks during the day.

You arrange to see the mother, on her own, initially monthly, to support her in making whole-family lifestyle changes.

You continue to see the mother on a 2- to 3-monthly basis to provide further support for long-term lifestyle change.