Trevor Anderson was born in Camberwell, Victoria, on 20 July 1941. The son of an army officer, he attended Melbourne High School before studying medicine at the University of Melbourne (1961–1966). In 1964, he joined the army, and, after completing his residency, was assigned to the Royal Australian Regiment as a Medical Officer in 1968. 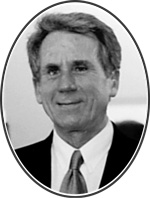 On 21 July 1969, in South Vietnam, Captain Anderson flew in to assist with treatment and evacuation after a landmine had killed and injured members of a platoon. As this process ended, another mine exploded, killing a corporal and causing further casualties. Trevor was blinded and wounded in the legs and abdomen.

After rehabilitation, Trevor trained in psychiatry at Royal Park Hospital, Melbourne, and the Parkville Psychiatric Unit, studying with the help of his wife Janice. In 1976, he became Psychiatrist in Charge at the Elizabeth Street Clinic, remaining for 28 years as the clinic moved to become first the Ellery Clinic, in Carlton, then the Waratah Clinic, in Moonee Ponds. There he developed community psychiatry, trained young psychiatrists and inspired medical students. He also pioneered psycho-oncology, starting a liaison service to the Peter McCallum Cancer Institute.

Trevor had a profound respect for individual rights. He never lost sight of the fact that our services are there to serve patients. His opening gambit to patients, “How can I help you?”, represented the ethical core of his practice philosophy. He was described by one colleague as “magic with difficult people”.

Trevor served on numerous Department of Veterans’ Affairs committees and won the 1991 Returned Servicemen’s League Anzac of the Year award. He was President of the Victorian Blinded Soldiers’ Association, served on the board of the Royal Victorian Institute for the Blind, and, as president from 1999, oversaw an amalgamation with Vision Australia and the Royal Blind Society of NSW. He was a member of the Victorian Psychological Council and an adviser to the telephone counselling service Lifeline.

No portrait of Trevor would be complete without mention of his extraordinary family. Married in 1968 to Janice Biggs, the home shared with their four children was an epicentre of activity and love. Despite his blindness, he sailed, canoed, skied, and rode a tandem bicycle on numerous excursions.

After facing pancreatic cancer with characteristic courage, Trevor died on 29 October 2004. He is survived by Janice and his children Penelope, Hamish, Virginia and Emily.