Philip Kessly died on 18 August 2004 in Perth, Western Australia, after a long illness. His career had been one conspicuous by his dedication to his community, family, and the art and science of medicine. 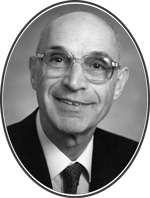 The eleventh of 12 children, Phil was born in London on 22 February 1922 to Jewish migrants who had fled pogroms in their native Ukraine. He was educated in London, Merseyside and Manchester. In 1937, he took an apprenticeship in pharmacy, which he completed in 1940.

During the war, Phil enlisted voluntarily in the British army, where he worked on radar. His service included a period in India, from where he returned in 1946. After demobilisation, he went to Edinburgh to study medicine, his great passion in life. It was there that he met Lilian, who later became his wife.

Phil migrated with his family to Australia in 1956, where he joined a practice in Mt Hawthorn, WA. He later established a very successful practice in Yokine, in suburban Perth. He continued in general practice until 1986, when ill health forced him to seek out a quieter practice in Como, where he continued to work until shortly before his death. In addition to running a very busy general practice, he involved himself in other aspects of medicine. He was a clinical assistant in dermatology at the Royal Perth Hospital (1960–1972) and a lecturer in the Department of Social Work at the University of Western Australia (1977–1979). He realised the importance of passing on his skills, and was a foundation member of the Department of General Practice at the University of Western Australia.

Phil was also actively involved in many political aspects of Australian medicine. He served on the WA Branch Council of the Australian Medical Association (AMA) (1972–1982) and was President in 1975. He was elected a Fellow of the AMA in 1979. He saw the need to recognise general practice as a special discipline, and was instrumental in establishing the WA Faculty of the Royal Australian College of General Practitioners, serving as its Provost from 1976 to 1978.

His regular appearance at Beatty Park Aquatic Centre in white robe, snorkel and mask will be sadly missed, as will his sharp intellect, his encyclopaedic knowledge and his commitment and compassion in medical practice. Australian medicine was fortunate to have had the contribution and enthusiasm of such a gifted and exceptional man.