Two patients with anorexia nervosa and raised serum creatinine levels were found to have nephrocalcinosis on renal biopsy, an association not previously described.

Ultrasound showed kidneys 9.5 cm and 9.3 cm in length, with possible calcification of the pyramids adjacent to the upper pole calyces. There was no calcification on plain abdominal x-ray. Her renal biopsy showed calcification in degenerate tubular basement membranes within the interstitium, and in three of 36 glomeruli. There was widespread interstitial fibrosis indicating chronic damage. One glomerulus showed basement membrane reduplication, but immunoperoxidase staining was negative.

A 31-year-old woman was referred by her general practitioner because of a rise in serum creatinine level from 0.16 to 0.41 mmol/L.

One year before the current admission, she had been hospitalised with hypokalaemia and renal failure (Box 1). Her potassium was corrected with intravenous replacement. She discharged herself the following day.

She subsequently had multiple episodes of hypokalaemia (potassium 2.0 mmol/L) despite large quantities of potassium supplements being supplied, with a positive urine laxative screen on two occasions. Serum calcium was intermittently high, the highest being 3.0 mmol/L (corrected for albumin).

One year after her renal biopsy, nasogastric feeding increased her weight from 30 kg to 38 kg after 5 weeks.

A year later, she developed pneumonia and septic shock, and died.

A key clinical feature of anorexia nervosa is “the relentless pursuit of thinness”1 and a “desperate need to grow thinner”.2 People with this disorder often engage in behaviour that affects fluid and electrolyte balance, including vomiting, laxative or diuretic misuse, fluid restriction, and the injudicious use of health supplements.

Anorexia nervosa can cause significant renal problems, some of which may have contributed to the development of nephrocalcinosis in our patients. Electrolyte disturbances include hypokalaemia, hyponatraemia, hypercalcaemia, hypomagnesaemia and hypophosphataemia.3,4 Hypokalaemia with metabolic alkalosis indicates either vomiting or diuretic misuse, whereas metabolic acidosis indicates laxative misuse.4 Hypokalaemia is rare in the absence of these behaviours.5 Body phosphate stores can be depleted, and refeeding can exacerbate hypophosphataemia, with serious consequences such as seizures and myocardial dysfunction.6 Renal function may also be affected by volume depletion.

Nephrolithiasis has been reported in patients with anorexia nervosa,7-11 but, to our knowledge, nephrocalcinosis has not. Nephrocalcinosis results from excessive calcium deposition in the kidney, and renal failure may result from tubular cell injury, tubular obstruction by calcified debris, and atrophy of nephrons. Chronic inflammation and interstitial fibrosis accompany these changes.12 In a series of 350 patients with nephrocalcinosis, the commonest causes were primary hyperparathyroidism (34.1%), distal renal tubular acidosis (20.9%), and medullary sponge kidney (11.7%).13

Hypercalcaemia is the most likely cause of the nephrocalcinosis in Patient 1, probably due to use of a vitamin D preparation. However, vitamin D was not elevated on the occasion it was measured. In Patient 2, diclofenac use may have contributed to fluctuations in renal function, but does not explain the biopsy findings.

Chronic severe hypokalaemia and laxative misuse characterised Patient 2, and in her case, diarrhoea and laxative misuse were the most prominent potential causes for hypokalaemia. However, her metabolic alkalosis is more consistent with diuretic misuse or vomiting (or both) than diarrhoea. Her low urinary potassium excretion does not disprove diuretic misuse, because she was taking a potassium-sparing diuretic (spironolactone), and her diuretic misuse may have been intermittent. Indeed, chronic use of frusemide for weight control has been associated with nephrocalcinosis in patients without anorexia nervosa.14,15 Chronic diarrhoea may contribute to nephrocalcinosis by causing volume depletion. Nephrocalcinosis associated with acute renal failure has been reported in relation to an oral sodium phosphate preparation used for bowel preparation for colonoscopy.16

Prolonged hypokalaemia can cause tubular atrophy, damage to tubular cells, interstitial lymphocyte infiltration, interstitial fibrosis and juxtaglomerular apparatus hyperplasia.17 Chronic tubulo-interstitial nephritis due to hypokalaemia has been described as a cause of end-stage renal disease in anorexia nervosa patients18 and may explain some of the chronic damage observed in Patient 2.

Patients with anorexia nervosa have potential risk factors that may predispose them to nephrocalcinosis, and this should be considered in the differential diagnosis of patients with eating disorders and abnormal renal function.

1 Electrolyte results for the two patients 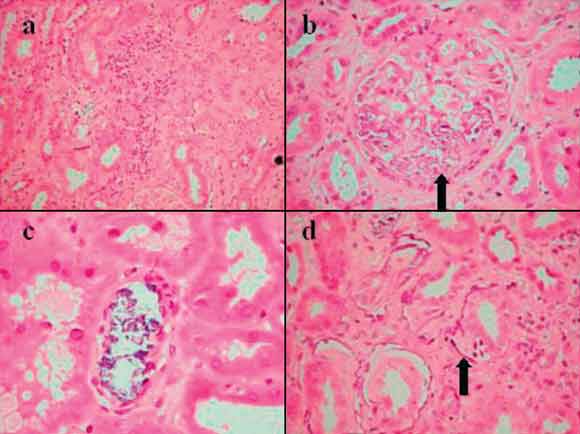 Six of 27 glomeruli were totally sclerosed and there was widespread interstitial fibrosis with tubular atrophy and interstitial lymphocytosis (a). Calcification was seen in glomerular basement membranes (b, arrow), within tubule lumens (c) and in tubular basement membranes (d, arrow). There was also intimal thickening of interlobular arteries, indicating arteriosclerosis and there were no significant abnormalities on immunofluorescence or electron microscopy. (Haematoxylin and eosin stain; original magnifications (a) × 40, (b) and (d) × 100, (c) × 200.)