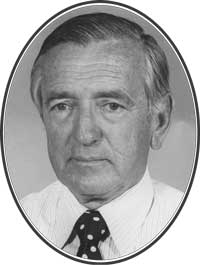 Ken Vincent was born in Waverley, Sydney, on 18 December 1916 and died peacefully in Bowral, on 22 February 2005, after a protracted illness. He was the only son of Ernest and Ethel Vincent.

Except for a period during World War II, Ken spent his entire life living and working within the Sutherland shire.

He attended Cronulla Public School and Canterbury Boys High School. In his last year at Canterbury, he was school captain and captain of the Rugby XV team. He studied medicine at the University of Sydney, graduating in 1941.

In 1953, after working for a number of years as a general practitioner, Ken took leave from general practice to specialise in otolaryngology at the Royal Ear, Nose and Throat Hospital in London. He eventually opened his own ENT practice in Caringbah, Sydney, in 1959.

He was a Visiting Medical Officer at both St George and Sutherland hospitals. It was through the support of Ken and other doctors in the Sutherland shire that the Sutherland Hospital was originally built in the 1950s, and it was there that he developed an interest in rhinoplastic and ear surgery. He was State President of the Otolaryngology Society from 1974 to 1976.

Early in his career, Ken joined Sydney Legacy, caring for the widows and children of ex-servicemen, a very active interest he maintained until the last few years of his life, when poor health prevented further participation and involvement.

Another part of his work was his voluntary involvement with the Aboriginal communities of western New South Wales, particularly the Murrin Bridge community at Lake Cargelligo, visiting them on a monthly basis in his capacity as an ENT surgeon. He also visited Papua New Guinea and Fiji to undertake voluntary medical work.

Many of the older Cronulla locals will remember him not only as the GP who delivered their babies but also as the one who took out their tonsils, or cured their glue ears or sinus problems.

Ken’s great love was his family and his life-long partner Nan, whom he adored. He had a remarkable memory, never forgetting a name or a patient’s details, even well into retirement. As an operating surgeon he was meticulous and unforgiving, especially of himself.

Ken is survived by his two children, Peter and Pam, and their families.