The Royal Darwin Hospital as a centre of excellence for clinical training in Aboriginal health: still a dream

Thirty per cent of the Northern Territory’s population are Indigenous Australians. Their cultural diversity and complexity is illustrated by the more than 50 different language groups that make up this population.1 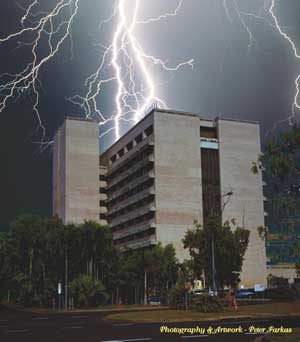 Because of their high burden of disease, Indigenous Australians can at times occupy up to 60% of inpatient beds at Royal Darwin Hospital (RDH).2 This is particularly so in RDH’s Division of Maternal and Child Health, where the health status of Indigenous women and children is arguably the worst in the developed world. The conditions associated with Indigenous pregnancy include social issues such as high rates of smoking, alcohol ingestion, domestic violence and teenage pregnancy. Compounding these are medical problems, including hypertension, gestational diabetes and rheumatic heart disease.3 As to the outcomes of pregnancy, Indigenous neonates at RDH have not only high rates of prematurity, but also intrauterine growth retardation and a mortality rate three times that of the rest of Australia.4

The high burden of disease continues throughout childhood. For example, over the past 25 years, between 400 and 500 Indigenous children from remote communities have been admitted each year to RDH, most commonly with gastroenteritis. Associated comorbidities include malnutrition, iron deficiency, pneumonia, urinary tract infection, chronic suppurative otitis media and scabies (often secondarily infected).5

In 2003, the NT Health Minister, Peter Toyne, in announcing a new framework for the NT Department of Health and Community Services, laid down a challenge: “By the end of the decade, I want the world’s best practice health care for Indigenous communities in the Northern Territory. I want to see a time when we don’t have to keep talking about how bad the situation is.”6

Some 12 months later, a proposal was put to the NT Department of Health and Community Services by RDH clinicians for a Centre of Excellence for Clinical Training in Aboriginal Health (Box). The proposed centre would deliver initiatives for the professional development of Indigenous health professionals — doctors, nurses, Aboriginal health workers and other health professionals — through the centre’s proposed Aboriginal Health Professionals’ Development Unit. If established, the centre would be the first of its kind in Australia. A Centre of Clinical Research Excellence in Aboriginal and Torres Strait Islander Health had recently been funded by the Federal Government at Flinders University.7

The proposal for a centre of excellence at RDH argued that, in providing the best clinical training in Indigenous health in Australia for postgraduate staff and medical and allied health students training at RDH, the centre would provide the impetus for creating key performance measures to benchmark RDH against the world’s best, and thereby identify gaps and areas for improvement. The centre would strengthen existing professional relationships with the Northern Territory Clinical School (which accepts students from Flinders University and James Cook University), the Bachelor of Nursing course at Charles Darwin University and the Menzies School of Health Research — institutions that all are located on the RDH campus.

Furthermore, the proposal fits well with other exciting local initiatives, including the proposed Flinders University Inaugural Chair in Indigenous Women’s Health, to be located at RDH, and the Postgraduate Diploma in Indigenous and Tropical Child Health currently being considered by the Royal Australasian College of Physicians.

One year on, the proposal is still a dream. Barriers to its implementation have come from several sources.

Firstly, some public health physicians feel that the centre would distract focus from the primary care arena, in which the major challenges to Indigenous wellbeing are to be found. However, RDH is unique in having many senior clinicians across all specialities, who have provided specialist outreach to remote communities over many years. They have accumulated an enormous depth of experience in primary through to tertiary care of Indigenous people — experience that could be better utilised for clinical training through such a centre. Furthermore, by bringing on stream such a centre, RDH would be better placed to link with cross-sectoral initiatives such as the NT preventable chronic diseases strategy.

Secondly, administrators, like their counterparts in most major Australian public hospitals, are so focused on the crisis management of access block, elective surgery and budget matters that future planning is often of low priority.

Thirdly, health bureaucrats newly arrived in the Northern Territory are convinced that the objective of the proposal is not unique and should have been already embedded in RDH’s core business plans. They are not inclined to commit even the modest resources necessary to make the proposal a reality.

This inertia should come as no surprise. It is par for the course in initiatives involving Aboriginal and Torres Strait Islander health. Strong leadership is required to overcome the bureaucratic and financial obstacles as well as the professional rivalries that are inevitably fuelled by change.

The implementation of the proposal for a centre of excellence at RDH by NT doctors and other health professionals is seen as integral to realising the NT Health Minister’s vision for dramatic improvement in Indigenous health. It remains to be seen whether there is the leadership to achieve this vision.

AntiSpam note: To avoid spam, authors' email addresses are written with AT in place of the usual symbol, and we have removed "mail to" links. Replace AT with the correct symbol to get a valid address.