We report two elderly women who presented with hypertensive crisis and acute pulmonary oedema, which responded poorly to antihypertensive therapy. The patients were later diagnosed as having hepatitis C virus-related cryoglobulinaemia.

Acute pulmonary oedema is a well-known complication of severe hypertension,1 but, to our knowledge, has never been reported in association with mixed cryoglobulinaemia. We report two patients with severe hypertension who presented with pulmonary oedema which was not controlled until cryoglobulinaemia was diagnosed and treated with plasmapheresis and methylprednisolone.

Presentation: A 66-year-old woman presented to our emergency department in late February (winter) with severe dyspnoea of 2 hours’ duration. She had a 10-year history of hypertension, and had had a stroke 3 months before, but had recovered. Over the previous month, her blood pressure had been over 210/120 mmHg, and she had intermittent dyspnoea, orthopnoea and leg oedema. On examination, she was orthopnoeic, with blood pressure of 218/124 mmHg, regular pulse of 126 bpm, and respiratory rate of 36 breaths per minute. She had engorged jugular veins, bilateral chest crackles, hyperpigmentation of the legs and marked bipedal pitting oedema. A chest radiograph showed diffuse haziness over both lungs. Electrocardiography (ECG) showed inverted T waves in leads V4 to V6. Oxygen saturation was 77% while breathing 100% O2 (reference range [RR], 95%–100%).

Initial management: The patient was intubated and mechanically ventilated. Her central venous pressure was 13 cmH2O (RR, 3–11 cmH2O), and pulmonary wedge pressure was 19 mmHg (RR, 6–12mmHg). She was treated with intravenous glyceryl trinitrate and diuretics, but over the next 48 hours her blood pressure fluctuated between 300/130 mmHg and 200/90 mmHg, and pulmonary oedema persisted.

Further tests revealed a decreased serum concentration of complement components C3 and particularly C4, and markedly raised concentration of rheumatoid factor. However, tests were negative for antinuclear (ANA), anti-double-strand-DNA (anti-ds-DNA), antiglomerulo-basement-membrane and antineutrophil-cytoplasmic antibodies. A cryoglobulin test was positive (Box 2). Immunofixation electrophoresis of the cryoprecipitates showed monoclonal IgM/kappa and polyclonal IgG. A test for hepatitis C virus antibodies (anti-HCV) was then performed and was positive.

Management: Plasmapheresis was started on Day 27, along with pulse therapy of intravenous methylprednisolone (500 mg daily for 3 days). After five courses of plasmapheresis in 12 days, the hypertension and pulmonary oedema were controlled.

Presentation: In February, 2 years after Patient 1, a 77-year-old woman presented to our emergency department with a 1-day history of severe dyspnoea and orthopnoea. She had had hypertension for 3 years. On several occasions during the previous month, her blood pressure had risen to 200/120 mmHg. On examination, she was stuporous, with blood pressure of 200/110 mmHg, regular pulse of 112 bpm, and respiratory rate of 36 breaths per minute. She had engorged jugular veins, bilateral chest crackles, hepatomegaly, ascites and bipedal oedema. A chest radiograph showed bilateral diffuse haziness, and ECG showed a generalised low QRS complex. Blood gas analysis showed pH, 7.43 (RR, 7.35–7.45); Paco2, 3.9 kPa (RR, 4.7–5.3 kPa) and Pao2, 11.2 kPa (RR, 12.7–13.3 kPa) while breathing oxygen through a mask.

Levels of both C3 and C4 were markedly low. ANA and anti-ds-DNA antibodies were negative, but rheumatoid-factor titre was markedly high. Cryoglobulin tests on Days 14 and 16 of admission were positive. Immunofixation electrophoresis of serum cryoprecipitates showed polyclonal IgG. HCV tests were negative for anti-HCV antibody but positive for serum HCV RNA.

Diagnosis: The diagnosis of type III mixed cryoglobulinaemia associated with HCV infection was thus established on Day 16 of admission. At that time, the patient was still being mechanically ventilated and needed repeated thoracocentesis (effusions were initially yellow, but later became haemorrhagic). Computed tomography of the head showed multiple ischaemic infarcts.

Management: Plasmapheresis and methylprednisolone pulse therapy (1 g intravenously daily for 3 days) were started on Day 17 of admission. The patient was extubated the next day and discharged from hospital 2 weeks later, after two courses of plasmapheresis. Serum creatinine level at discharge was 291.5 μmol/L.

Our patients had had moderate hypertension for 3–10 years before their blood pressure suddenly rose markedly 2 to 3 months before the development of pulmonary oedema. Hypertension has been found in 37% of patients with cryoglobulinaemia.6 When the underlying disease of cryoglobulinaemia (eg, hepatitis C) flares up, levels of cryoglobulins (which contain HCV-RNA) increase, resulting in higher levels of circulating immune complexes, acute vasculitis and raised blood viscosity. These factors all precipitate the abrupt rise in blood pressure and pulmonary oedema, and explain the failure of conventional antihypertensive agents.

Treating cryoglobulinaemia in our patients decreased renal vasculitis and ischaemia, fluid overload, and ultimately hypertension and pulmonary oedema. Coronary vasculitis, found at autopsy in 22% of patients with mixed cryoglobulinaemia,6 could contribute to pulmonary oedema. However, both our patients had a normal LV ejection fraction, suggesting that neither had significant coronary vasculitis.

In our patients, the initial features that led to the suspicion of vasculitis were petechiae, proteinuria and haematuria. Further testing revealed decreased complement levels (especially C4). These and other manifestations, including oedema, ascites, recurrent pleural effusions, cerebral infarction and glomerulonephritis, were caused by circulating cold-precipitable immune complexes and resulting vasculitis.6-9

Chronic HCV infection stimulates B-cell clones to proliferate and produce cryoprecipitable IgM antibody with rheumatoid-factor activity10 — an important laboratory index of HCV-related mixed cryoglobulinaemia. However, Patient 2 was negative for anti-HCV antibody, possibly because the sensitivity of the anti-HCV immunoassay, although high, is still suboptimal,11 or because the anti-HCV antibodies were concentrated in cryoprecipitates, and therefore not detectable by the serum assay.7

In both patients, the refractory hypertension and pulmonary oedema responded to plasmapheresis and methylprednisolone therapy. Conventional treatment of mixed cryoglobulinaemia aims to reduce circulating immune complexes through immunosuppression and plasmapheresis.8 Although immunosuppressive therapy alone could ameliorate vasculitis,12 plasmapheresis has shown hypotensive effect in immune-complex nephritis, including mixed cryoglobulinaemia.13 It also reduces plasma viscosity and improves perfusion of the affected organs,14 thus helping in patients with hypertension, encephalopathy or severe renal impairment.

Neither patient had a history of blood transfusion, surgery, intravenous drug use or tattooing. They probably acquired HCV infection through non-sterile injections or acupuncture in local clinics, the most common source of HCV infection in Taiwan.15,16

With the increasing prevalence of hepatitis C,17 knowledge of its extrahepatic manifestations is important. Our two patients illustrate the association with mixed cryoglobulinaemia presenting with hypertensive crisis and acute pulmonary oedema. 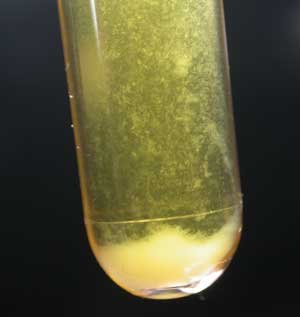 Cryoglobulin particles float in the serum and precipitate at the bottom of the test tube at 4°C. The particles dissolve on rewarming of serum to body temperature.