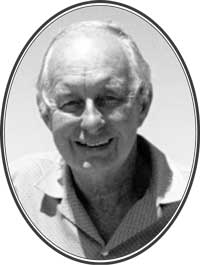 Don Wurth died on 31 March 2004, after a 5-year decline with Lewy body dementia. He was a 50-year member of the Australian Medical Association.

Don was born in Sydney on 1 January 1921, the oldest son of Wallace Wurth. He attended Fort Street High School and Sydney High School, and studied medicine at the University of Sydney, doing a compressed course during the war years.

Don did his residency at Sydney Hospital, where all-night poker games featured prominently. His father, Director General of Manpower for the Commonwealth, keen to avoid any impression of privilege, made sure Don was one of the first in his year to enlist in the Army. After training at various camps, he was in the first wave landing at Balikpapan in Borneo. He gained valuable surgical experience in field hospitals.

After demobilisation, Don worked his passage to England as a ship’s doctor, and gained his Fellowship of the Royal College of Surgeons in London in 1949. He married Ivy Field, a theatre sister at Barnet Hospital, in 1950, and returned to Sydney later that year.

He settled in the Cronulla area, and performed the first operation at Sutherland District Hospital in 1958, where he was senior surgeon. He held appointments for many years at Prince Henry and Prince of Wales hospitals and the Royal Hospital for Women.

Don was a clinical lecturer at the University of New South Wales, where his father, the University’s first President and Chancellor, had been instrumental in establishing the Wallace Wurth School of Medicine. Don trained many registrars and residents during his long career.

His main love, after surgery, was jazz, and he used the opportunities opened up by admission to the American College of Surgeons to attend conferences and listen to jazz in many cities in the United States. However, his favourite city was always London, to which he returned many times.

Don performed his last operation in 1986, but continued working in a consultant capacity for the next 5 years. He devoted the first part of his retirement to boating, his grandchildren, and his friend Val Derwin. He is survived by Val, his former wife Ivy, and children Graham, Peter, Jonathan and David.