Sirus Naraqi, an inspiring and warm-spirited doctor with a deep commitment to bettering the lives of the underprivileged, died in Sydney on 18 August 2004, after a two-year illness. 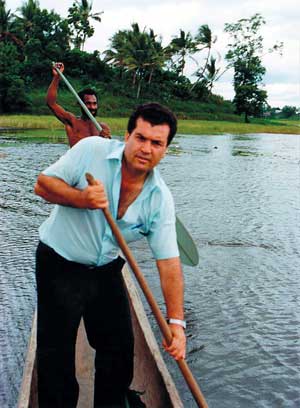 Born in Persia on 30 September 1942, Sirus Naraqi served as a general practitioner to the Persian army before emigrating to America in 1969. There he completed postgraduate training at the University of Chicago and the University of Illinois, followed by numerous consultant physician and academic appointments.

Sirus used his interest in infectious diseases to express his strong humanitarian desire to serve in areas of greatest need, such as Papua New Guinea (PNG), where he took up the Chair of Medicine at the University of PNG in 1983. During his time at the university, he led major research projects on severe forms of malaria, snakebite and meningitis. His warmth and style were important in preparing junior colleagues for positions of leadership. Because of its research and educational programs, the university’s Faculty of Medicine achieved international recognition. In 1998, after Sirus had spent 15 fruitful years in PNG, the University of Sydney appointed him Professor of Medicine and Associate Dean at Nepean Hospital, Penrith.

Sirus had a lifelong commitment to community service. This included continuing participation in public debate; work with the World Health Organization on tuberculosis, malaria and HIV/AIDS; research and rural health work in PNG; and promotion of international human rights, literacy, hygiene and nutrition for the underprivileged. He also held numerous positions of leadership within the Baha’í congregation. The Queen made Professor Naraqi a Commander of the British Empire in 1998 for his service to PNG.

The entirety of Sirus — his personal and professional actions — was inspired and strengthened by his Baha’i faith, an inclusive belief that expresses the oneness of humanity and the permanence of the human spirit, and that considers work in the spirit of service to others as worship of God. As a former colleague in PNG said, Sirus was the embodiment of equanimity, graciousness, clarity and generosity.

Sirus was treasured by many people. Medical students respected his generosity of spirit and his dedication to teaching and to the profession. He did not seek effect or popularity. He was a world citizen who gave respect spontaneously and received it in return. His academic colleagues delighted in his integrity, commitment, firm principles and intellectual capacity.

He is survived by his wife Mitra and children Ladan, Naysan, Anisa and Gulita.