Going with the flow: Ascaris lumbricoides in a T-tube 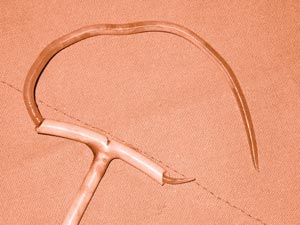 A roundworm (Ascaris lumbricoides) trapped in a T-tube

Removal of the stones by means of endoscopic retrograde cholangiopancreatography and endoscopic sphincterotomy was unsuccessful because of difficulty catheterising and visualising the ampulla of Vater. After open cholecystectomy and exploration of the common bile duct, the sphincter of Oddi was dilated with bile duct dilators, and a T-tube was inserted before closure. After an uneventful postoperative period, the T-tube was removed 14 days after operation. A dead Ascaris lumbricoides roundworm was trapped in the T-tube.

The patient was discharged 2 days later after receiving anthelmintic treatment. Abdominal ultrasound and stool examinations showed no abnormalities at follow-up after 1 month and 6 months.

A. lumbricoides, the most common roundworm infecting humans, is endemic in areas where sanitation standards are poor. Adult worms normally reside in the upper gastrointestinal tract, but can migrate into any organ in the body, including the biliary tree (biliary ascariasis).1