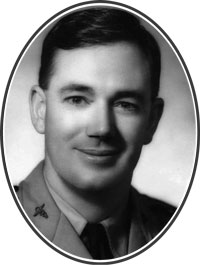 Percy James (“Jim”) White was born on 8 December 1919 —“delivered on a kitchen table by an alcoholic midwife in Murphy Forest, Benambra”, or so the story goes. He spent a life successfully combining his love for farming, medicine and family.

He attended Benambra state school in northeastern Victoria, St Patrick’s College (Sale), Trinity Grammar School (Kew), then Melbourne Grammar School, where he rowed in the victorious crew at Henley on the River. He graduated in medicine from the University of Melbourne in 1944.

Jim did his residency at the Royal Brisbane Hospital, then, in 1945, became a flight lieutenant in the Royal Australian Air Force. After a period in Melbourne conducting medical examinations on Air Force personnel, he was moved to Darwin as Principal Medical Officer North-Western Area (Darwin). He married Louris Larsen-Disney in 1948 and, a year later, returned to farming at “New Metunga”, in Benambra, later moving to the town of Wooragee.

Returning to Melbourne in 1953, Jim began work at the Victorian Health Department as a District Health Officer, covering, at first, his beloved Gippsland area. Later, he was appointed Senior District Medical Officer (Metropolitan), and occasionally took on the role of Acting Head of Department. He was also a Member of the Faculty of Community Medicine of the Royal Colleges of Physicians of the United Kingdom and a Foundation Fellow of the College of Medical Administrators, established in 1967.

In 1979, Jim retired from the Victorian Health Department to work part-time in the Department of Veterans’ Affairs. (One day, while examining a veteran, he found notes he had written when examining the same person 40 years earlier!) From 1982 to 1987, Jim was a board member for the Greenvale Hospital. He also lectured as a Foundation Member of the Early Planning for Retirement Association. He was a key player in several Probus clubs, being President of both the Brighton and Toorak clubs.

Jim died in his sleep on 16 August 2004. He is survived by his wife of 57 years, Louris, and children Donald, John, Diana, Robert and Andrew.