We present a rare case of spontaneous intramural oesophageal perforation after the rapid ingestion of a cold carbonated beverage. A previously well patient presented with sudden onset of severe retrosternal pain associated with pain on swallowing. A contrast computed tomography scan and gastroscopy confirmed the diagnosis. With the widespread popular practice of drinking cold carbonated beverages, especially during the summer season, clinicians should be aware of this possible serious complication.

A 57-year-old woman presented to the emergency department with retrosternal chest pain of sudden onset immediately after the isolated intake of a large mouthful of cold carbonated beverage directly from the bottle. The initial severe pain led to a brief loss of consciousness. The pain was continuous, exacerbated by swallowing, and accompanied by mild nausea, but no vomiting. She was previously a fit, healthy woman with no past medical history relevant to the case. She was febrile (37.6oC) and distressed by the pain. Examination was normal except for epigastric tenderness with retrosternal radiation. There were no signs of peritonism.

The only abnormality in the patient’s blood tests was a mildly elevated white cell count of 11.7 3 109/L (reference range, 4.0–11.0 3 109 cells/L). An electrocardiogram and chest x-ray were normal. These initial investigations ruled out a cardiovascular condition, spontaneous pneumothorax, peptic ulcer disease and pancreatitis. The differential diagnosis was oesophageal pathology, including perforation. A computed tomography (CT) scan of the thorax showed a tiny bubble of gas either within the wall of the oesophagus or just adjacent to it in the middle mediastinum (this did not definitively exclude a full perforation of the oesophagus).

The patient was admitted and managed with nil by mouth, intravenous fluids, triple intravenous antibiotic therapy (ampicillin 1 g four times a day, gentamicin 5 mg/kg daily [with subsequent doses titrated according to drug level], metronidazole 500 mg twice a day), intravenous omeprazole 40 mg three times a day, and frequent observation. Her fever resolved within 24 hours, but her C-reactive protein level rose to 18.2 mg/L (reference range, 0–8.0 mg/L). A second CT scan, with water-soluble contrast, showed intramural contrast with no extravasation, consistent with a partial perforation of the oesophagus (Box 1). Gastroscopy revealed a 10 cm longitudinal mucosal/submucosal tear in the left posterolateral wall of the oesophagus 3 cm above the gastro-oesophageal junction (Box 2A), and a small sliding hiatus hernia. The rest of the oesophagus, stomach and duodenum were normal.

The patient’s symptoms improved with conservative treatment. She started clear fluids on Day 4, progressed to a soft diet, and was discharged on Day 7 with a prescription for oral omeprazole 40 mg daily. After 4 weeks, she still had occasional mild discomfort on swallowing. A repeat gastroscopy showed the healed scar of the tear, with no evidence of stricturing (Box 2B). Gastroscopy also revealed uncoordinated peristalsis of the oesophagus, but video fluoroscopy excluded dysmotility.

Spontaneous oesophageal perforation (Boerhaave’s syndrome) was first described by the Dutch physician Hermann Boerhaave in 1724.1 The classical presentation follows forceful vomiting. Boerhaave’s syndrome is a form of barogenic rupture caused by a rapid rise in intraluminal pressure when there is sudden distension of the oesophagus in a closed space.2-4 In this case, we postulate that the rapid ingestion of the cold beverage led to spasm of the distal oesophagus followed by effervescent expansion, resulting in a sudden build-up of intra-oesophageal pressure. A similar case, in which a healthy 67-year-old man sustained two oesophageal tears after rapidly ingesting a cold Alka-Seltzer beverage, has been reported by Oriscello and Mahal.5 The vast majority of perforations occur in the left lateral wall of the distal oesophagus, 3–6 cm above the gastro-oesophageal junction, as this part is particularly weak.2,3

Although Boerhaave’s syndrome is relatively uncommon, it is a serious disorder. Weakening of the oesophageal wall (in conditions such as reflux oesophagitis, infectious oesophagitis, Barrett’s ulceration, benign stricture, oesophageal carcinoma, dysmotility and neurogenic abnormalities) predisposes to this syndrome.4,6 Among people who experience complete perforation, mortality is 13%–25% if treated within 24 hours of symptom onset, 33%–65% if treated 24–48 hours after onset, and 89% if treated after more than 48 hours.3,6

The clinical features of Boerhaave’s syndrome range from a subtle presentation to cardiovascular collapse. Complications include septicaemia and shock.2,4,7 The most common symptom is retrosternal chest pain. Associated symptoms include dysphagia, odynophagia, pleuritic chest pain and dyspnoea.2 Examination reveals fever in 50% of patients, subcutaneous emphysema in up to 60%, and the Hamman’s sign of pneumomediastinum in 20% (ie, a crunching sound with each heartbeat).2 Pneumothorax and pleural effusion are more likely to be revealed on investigation than on physical examination.

Blood tests are usually normal, apart from leukocytosis in up to 85% of patients.2 An erect chest x-ray may show subcutaneous emphysema, pneumomediastinum, mediastinal widening, mediastinal air–fluid levels, pleural effusion, pneumothorax and/or hydropneumothorax.4,6 However, a chest x-ray is normal in 12%–33% of patients.6 With a high suspicion of oesophageal rupture, an oesophagram with water-soluble contrast should be requested, with progression to barium if the former is negative. However, contrast studies can have false negative results in more than 10% of patients.6,7 A CT scan may show pneumomediastinum, abscess cavities adjacent to the oesophagus, or an actual communication between the air-filled oesophagus and an adjacent mediastinal or paramediastinal air–fluid collection.4,7 Gastroscopy can be diagnostic, but should not be performed routinely, as it can increase the size of the rupture.3,7 If a pleural effusion is present, aspiration by thoracocentesis may show food particles and squamous cells from saliva. The aspirated fluid may have pH < 6 and a high amylase content.6,7

Conservative management can be tried in patients with intramural tears or stable transmural ruptures. Otherwise, surgical treatment should be sought.6

The case we describe here is typical of Boerhaave’s syndrome with partial perforation in terms of the presentation of retrosternal chest pain, odynophagia, fever, leukocytosis and normal chest x-ray, but unusual in its association with carbonated beverage ingestion rather than vomiting. In cases like this, it remains vital to conduct further investigations to rule out a full perforation, for which the presentation may be similar but the outcome rapidly fatal. The role of gastroscopy is controversial, but we chose in this case to use a gentle procedure to confirm the diagnosis.

The scan shows intramural contrast in the oesophagus (arrow) with no extravasation.

2 Gastroscopic images of the oesophagus 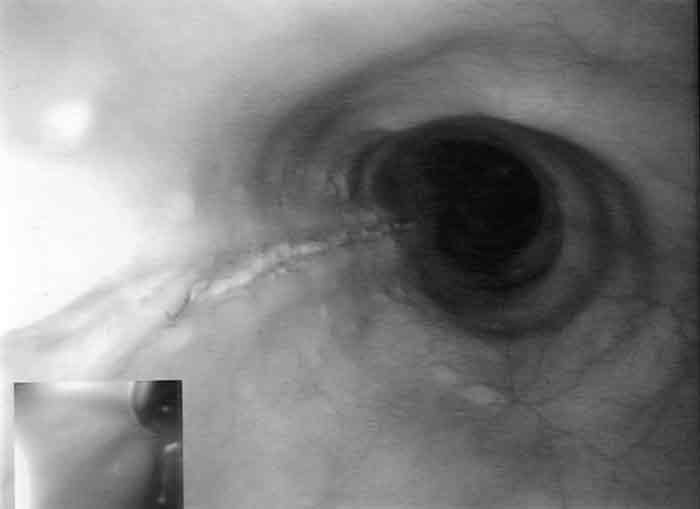 A: Initial gastroscopy revealed a 10 cm tear in the left posterolateral wall. 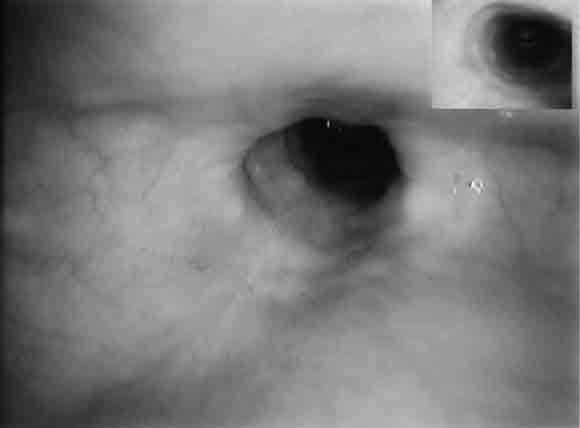 B: Healed scar of the tear after 4 weeks.