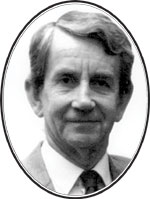 Ross Webster served Australian medicine for 55 years — 20 as a rural general practitioner, 15 as Professor of Community Medicine, and 15 with the Medical Indemnity Protection Society.

Son of Reginald Webster, the first Victorian public hospital pathologist, Ross was born on 5 January 1924 in Melbourne. He studied medicine at the University of Melbourne, graduating in 1947.

After graduation, Ross served in the Occupation Force in Japan as a member of the Royal Australian Army Medical Corps. Returning to Australia in 1950, he did postgraduate training in Melbourne, then moved to Horsham, in north-west Victoria, to join a multidisciplinary clinic and to be Honorary Medical Superintendent of the Wimmera Base Hospital. He served 6 years on the Horsham City Council, including one year as Mayor.

After his wife Marjory’s death in 1972, and with three children to care for, Ross opted for regular hours of work at the Cancer Institute in Melbourne. In 1975, he was appointed Foundation Professor of Community Medicine at the University of Melbourne. In 1985, he married Jill, who was at the time Director of Nursing Education at the Cancer Institute.

Ross was a tireless worker for the University community. He chaired the University’s Board of Social Studies, the Academic Committee and the Social Biology Resources Centre. He also chaired accreditation committees for nursing courses and the Victorian Health Advisory Council. He served on the Health Services Review Council and on the Federal Administrative Appeals Tribunal.

Ross was an active and dedicated member of the Australian Medical Association (AMA), being a Councillor of the Victorian Branch for 33 years, President in 1977 and Chairman for 14 years. He is the only recipient of AMA Victoria’s Medal of Merit. He chaired the AMA Federal Council and Assembly for 6 years and was elected a Fellow of the AMA in 1979.

Although he retired from the University in 1989, Ross did not stop working. In 1990, he became a part-time Director of Medical Services at Werribee and Broken Hill hospitals. He was also Foundation Chairman of the Medical Indemnity Protection Society (1988–1998), and continued to manage legal claims until his retirement in 2002.

Ross was a man of great integrity. He was intolerant of questionable corporate behaviour and conflicts of interest, and had no time for specious arguments “justifying” such behaviour.

He was friend, mentor and, above all, exemplar to many doctors. He died on 26 November 2003, of multiple myeloma. The profession and the community at large celebrate his lifetime of achievement and service.