Data sources: A computerised literature search of MEDLINE and EMBASE was undertaken. All cases reported to major Australian museums and reports from venom researchers working with mouse spiders were also reviewed. Textbooks on clinical toxinology were searched and further reports of cases were located.

Study selection: All cases of definite spider bites where the spider was collected and identified by an expert as a mouse spider were included.

Data synthesis: Forty definite bites were identified from around Australia, with only one case of severe envenoming (a 19-month-old child). Local neurotoxic effects occurred in six cases and minor systemic effects in five. There was no evidence of envenoming in most bite victims, and the rate of severe envenoming was 2.5% (95% CI, 0–13%). There were no recorded deaths.

Conclusions: In most cases, bites by mouse spiders cause only minor or moderate effects. Severe envenoming is rare and far less common than for funnel-web spider bites. Mouse spider bites do not appear to be a major medical problem.

Mouse spiders have been recognised for decades,1,2 although there have been few published reports of definite bites. 3,4 A single report of a severe bite in a 19-month-old child by the eastern mouse spider (pictured) has, in the absence of other reports, caused significant concern about the severity of mouse spider bites.5 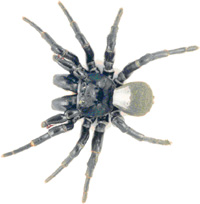 The increasing concern about mouse spider bites makes it important to determine their medical significance. This review includes all reported bites in the literature and museum reports.

Multiple sources were used to identify all mouse spider bites reported in Australia. Only definite bites were included where the spider had been collected and identified by an expert. Bite reports were gathered from:

Searching MEDLINE and EMBASE identified one case series from 45 “hits”.4 Searching major clinical toxinology textbooks7,8 and reference lists identified the rest. Most reported cases were in museum publications, conference abstracts and non-peer-reviewed publications.1-3,5,9 One series of seven bites by M. pruinosa,4 a report of two M. bradleyi and one M. occatoria bites2 and three separate case reports of Missulena spp. bites were identified (13 bites)1,3,5 (Box 1). A further 13 cases (nine new ones) were reported recently, but were not available on MEDLINE at the time of the search.10

All 40 definite bites are recorded with clinical information in Box 1. Only one bite caused severe neurotoxic envenoming, giving a severe envenoming rate of 2.5% (95% CI, 0–13%). Six bites, all by M. bradleyi, caused minor local neurotoxic effects (paraesthesiae, numbness and diaphoresis). Minor systemic effects (headache and nausea) occurred in five cases. Nine children were bitten by M. bradleyi. Three of these children were younger than 2 years, and suffered only minor effects.

The seasonality of bites by the three main species (31 bites) is presented in Box 2.

It is unclear why the bites of these spiders cause little effect when the venoms of at least two species have been shown to be similar to funnel-web spider venoms6,12,13 and their effects can be reversed by funnel-web spider antivenom.6 Recently, the toxin δ-missulenatoxin-Mb1a was isolated from the venom of M. bradleyi, and was shown to be 88% homologous with the medically important δ-atracotoxin-AR1a (previously “robustoxin”) from the Sydney funnel-web spider.13 It has been suggested by some that it may be that most bites are “dry” bites, but it is unclear why venom would rarely be injected by the spider.

The small sample of cases makes it difficult to differentiate between species, but the eastern mouse spider (M. bradleyi) appears to be the most venomous — it caused the only severe envenoming, and most of the moderate envenomings in the recent prospective series.10

Mouse spider bites show a seasonal pattern of bites corresponding to the spring months in northern Australia and the autumn–early winter months in more southerly regions. Box 2 demonstrates this best for M. bradleyi in eastern Australia and M. pruinosa in the Northern Territory.

The month of the bite was not reported for one M. bradleyi bite.5