Embolisation to the fingers of both hands from aortic atheroma

A 60-year-old woman presented with a gangrenous right index finger. She had a 44-pack-year history of smoking and no significant past medical history.

On examination, brachial and radial arterial pulses were normal, minimal signs of atherosclerosis were apparent on fundoscopy, and no neurological abnormalities were present. Results of a full blood count, blood chemistry (including high-density lipoprotein and low-density lipoprotein cholesterol) and coagulation tests were normal. The erythrocyte sedimentation rate was 20 mm/h (normal range, < 20 mm/h). Potential indicators of hypercoagulability, including levels of protein C, protein S, antithrombin III, factor V, antinuclear antibody and lupus anticoagulant were normal, but the level of homocysteine was raised (16 μmol/L; normal range, 5–15 μmol/L).

A transoesophageal echogram showed normal cardiac and valve function, with no obvious thrombi. However, there were diffuse atherosclerotic changes in the aortic arch, with a grade-IV protruding atheroma (7 mm) proximal to the innominate artery (Box). An arterial Doppler study of both upper extremities showed a lack of flow in the right ulnar artery.

Angiography was not performed, in view of the risk of causing another embolus. The gangrenous right finger was amputated. Histopathological examination confirmed gangrene of the finger, with no evidence of vasculitis or cholesterol emboli.

The protruding aortic atheroma was the likely source of emboli. Warfarin, simvastatin and folic acid were started.

A month after a therapeutic warfarin level (target INR, 2.5–3.5) had been achieved, the patient presented with pain in the left third finger. The finger was oedematous, erythematous and tender, and INR was 1.7. Another episode of embolisation was suspected, although repeated arterial Doppler study showed no evidence of arterial insufficiency in the left arm.

The warfarin dose was adjusted, and symptoms improved spontaneously. No embolic events were apparent in other organs during the course of treatment. The patient, who has continued to take simvastatin, folic acid and warfarin, has been symptom-free to date. 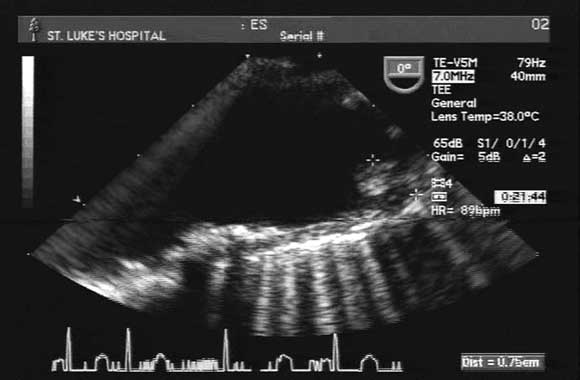 Transoesophageal echogram showing a protruding atheroma proximal to the innominate artery, as marked by crosses.