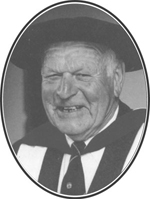 John Henry Winter Birrell, a general practitioner and former police surgeon, died on 25 March 2003 of myelodysplasia. He will be remembered especially for his tireless and ultimately successful campaigning to reduce road accident deaths by introducing Breathalyzer testing of drivers and compulsory wearing of seatbelts.

John was born in Melbourne on 29 December 1924. As a student at Melbourne Grammar School, he excelled academically and on the football field. In 1942, he began studying medicine at the University of Melbourne and completed his first year with ease. Then, in defiance of his father’s wishes, John joined an army unit in Cowra. He was soon found and returned to university, but failing his second year enabled him to rejoin the army. He was posted to Papua New Guinea, where he joined the Medical Corps. He resumed his studies in 1944 and won the forensic medicine prize in his final year.

Between 1952 and 1956, John was a lecturer in pathology at the University of Melbourne and a senior lecturer at Monash University. After working as Assistant Coroner’s Pathologist at the Melbourne City Morgue (1955–1957), he was selected to be Police Surgeon, a position he held for the next 20 years.

One of his early duties was to do blood alcohol estimates of road crash victims. On call 24 hours a day at his home in Blackburn, his exposure to the carnage on Melbourne roads soon aroused his anger. He was horrified at the increasing number and severity of fatalities and injuries he witnessed.

Joining the Traffic Injury Committee of the National Health and Medical Research Council in 1960, John’s influence was soon obvious when the committee recommended that seatbelts be fitted and worn in vehicles.

He worked tirelessly with the media on seatbelt promotion, influenced politicians and parliamentary road safety committees, and educated schools and community groups about road safety issues. Several of his articles on seatbelts and the dangers of driving after drinking alcohol were published in the Journal in the 1960s.1,2 In the words of Basil Hetzel (Foundation Professor of Social and Preventive Medicine at Monash University), delivering the Boyer Lecture in 1971, “John Birrell became the public face on the issue of blood alcohol and road safety . . . the major force in arousing public awareness of the problem”.

In 1966 it became an offence to drive with a blood alcohol level exceeding 0.05%. The mandatory wearing of fitted seatbelts by drivers and front-seat passengers became law in Victoria in January 1971 and was introduced in all states and territories by the end of the same year. It was in Victoria that “booze buses” (mobile breath-testing units) were first introduced (in 1990).

In 1974, without the financial support of government or other alcohol and safety bodies, John made a successful bid to have the 7th International Conference on Alcohol, Drugs and Traffic Safety held in Melbourne in 1977. The event was an outstanding success, attracting extensive media coverage and raising community awareness about road safety issues.

Another issue about which John felt very strongly was child abuse. He was the Patron of Australians Against Child Abuse.

In 1977, John went into private practice in Foster (VIC), where he remained for 5 years. He then moved to Point Lonsdale, where, until a few years ago, he worked at the Community Health Centre in nearby Queenscliff.

John is survived by his wife Jackie and sons John, Mike and Simon.