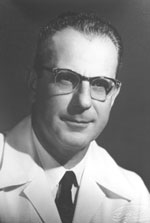 Geoffrey Henry Moore was born on 26 August 1913 at Waverley, in Sydney. He grew up in humble circumstances in Riverstone, near Windsor, and attended Parramatta High School. He went on to become a highly regarded surgeon, well known and well respected for his clinical judgement.

After graduating in medicine from the University of Sydney in 1935, Geoff did his residency at Royal Prince Alfred Hospital and Prince Henry Hospital. It was here that he met Gladys Duncan, whom he later married. He obtained a Fellowship of the Royal College of Surgeons (Edinburgh) in 1939, then spent two years at Harrow Road County Hospital in London during the Blitz.

Geoff was destined to make a number of “lucky escapes” in life. When he decided to return to Australia, his development of chickenpox — thought at the time to be smallpox — prevented his embarkation on a ship that was subsequently sunk in the Atlantic. When, in 1941, he finally arrived in Australia on another ship, he attempted to enlist for service in Singapore, but was “manpowered” to Townsville instead. His replacement was interned in Changi prison for the duration of World War II.

Geoff was directed to Townsville General Hospital (the largest state hospital outside Brisbane) as superintendent. He was faced with the enormous task of reorganising and re-establishing medical services, which were in disarray and decline. Apart from the decrepit facilities, discipline had broken down in a background of US occupation, imminent Japanese invasion and plans for evacuation of personnel west to Charters Towers. Geoff took on a horrendous workload, managing hospital inpatient and outpatient services, reorganising and re-establishing hospital administration, and improving medical and nursing training standards. He remained at Townsville General Hospital until 1949, when he resigned to enter private surgical practice. However, he continued as a visiting gynaecologist and representative of the Queensland Radium Institute to the hospital until forced retirement in 1976. Thereafter, he continued as honorary consultant gynaecologist until 1986 and as surgical assistant to younger surgeons until 1994. He obtained Fellowships of the Royal Australasian College of Surgeons (1969) and the Royal Australian College of Obstetricians and Gynaecologists (1979), and was awarded a Medal of the Order of Australia in 1986 for services to medicine.

In his younger years Geoff was a keen tennis player and horseman. A quiet man, he was an avid reader with a large library of books, particularly history books. He enjoyed gardening, and had a special interest in native plants of North Queensland.

He died on 14 December 2002 from a secondary malignancy. He is survived by his wife Gladys, two sons (both doctors) and a daughter (ex-nurse).