Interns are from Venus, consultants are from Mars: differential perception among clinicians

Setting and participants: 90 medical personnel at a tertiary care hospital in Newcastle, NSW.

Intervention: Healthcare professionals were shown two pictures that could be interpreted as depicting either a young or an old person, and a word that could be seen as geometric shapes.

Main outcome measures: The effects of sex, age, seniority, and specialisation in relation to the first impression of the image, the ability to change one’s perception, and the speed of perception.

Conclusions: Traditional sex stereotypes do not apply to medical personnel, but other age-based stereotypes, and professional rivalries (medical versus surgical) may have some empiric basis.

Stereotypes about sex differences are rife in the popular press and in the media.1 Men are portrayed as being obsessed with sex and sports, with a beer in one hand and the television remote control in the other. Women are portrayed as being intuitive, in touch with their feelings, generally “connected”, and nurturing. These stereotypes extend to cognition, with men reported to be systemisers and women empathisers.2

In support of their claims about sex differences, Pease and Pease make use of images that can be perceived in two ways.1 Box 1 shows a well known example of this (Picture 1). First seen on a postcard from Germany in 1888, it was published in Punch as “My Wife and Mother-in-Law” and popularised by the British cartoonist W E Hill in 1915.3 According to Pease and Pease, women are more likely to see an old woman with her chin tucked into the collar of her coat, while men are more likely to see the left-sided profile of a young woman who is looking away. These dual pictures became very fashionable in the 1930s, and many others were developed. For example, Picture 2 in Box 1 can be taken as an old cowboy with his chin tucked into his scarf, or as a young cowboy in right-sided profile, looking away.1

Further generalisations are made along right brain/left brain lines, in claiming that men are more “concrete” in the way they visualise objects, whereas women are more abstract, leading to the many jokes about men, women, maps, and directions. Pease and Pease give the example of Picture 3, claiming that men tend to see geometrical shapes, whereas women recognise the word “FLY”.

Pease and Pease suggest that differences between the sexes evolved over centuries in accordance with specific tasks. Men developed spatial ability and the ability to see objects in three dimensions because of the need to hunt and gather. Women have more peripheral vision because they had to stay in the hut to protect the children from predators.

If these differences exist, we wondered whether healthcare professionals have the same differences in brain function? Does medicine attract more polymathic, flexible types? If healthcare professionals do show the same differences, how is it likely to affect their work? If a male doctor and a female doctor are examining a patient with thyroid swelling, is the male more likely to see it in three dimensions? Should preference be given to male or female ambulance drivers? Do male and female medical students looking at the Krebs Cycle map perceive it similarly? The implications for medical practice and education are enormous.

Thus, we carried out a prospective survey on unsuspecting colleagues to investigate any potential sex-linked differences in perception. We also investigated the effects of age, seniority level, and field of specialisation.

A convenience sample of healthcare professionals in different fields and at different stages of their career was chosen from those attending rounds, snoozing in the library, chatting in the hallways, slouching in the cafeteria, and occasionally from those found in the toilets, of a tertiary teaching hospital, during June and July 2003.

For Pictures 1 and 2, participants were told they would be shown images that could be interpreted two ways. They were asked to state their initial impression and then to form a second impression. We recorded each participant’s initial impression (old versus young man or woman), and their ability to form a second impression (ie, was the participant able to see the opposite picture to the one he or she initially identified?). If no picture was recognised within 1 minute, the test result was scored as a “fail”. As the image in Picture 1 had been used on beer coasters at a local pub frequented by staff, they were asked not to score this figure if they had seen it in the past.

With Picture 3, staff were asked “What do you see?”. Their first impression and the time taken to recognise the word were recorded, the latter using a stop watch. Again, if no word was recognised within 1 minute, the test result was scored as a “fail”. Demographic data including age, sex, level of training (student, intern, registrar, or consultant for medical personnel, and junior or registered for allied health), and field of specialisation (medical/surgical/allied health) were recorded.

Univariate logistic regression was used to explore the relationship between these outcomes and demographic details.

All 90 staff members who were approached participated, giving a 100% response rate. Their average age was 35.5 years (SD, 12.1 years). Fifty-four per cent of participants (49) were men; 65 identified themselves as medical, and 15 as surgical. The two janitors who participated were included in the allied health category. Fifty-three participants were classed as senior (registrar/consultant) and the remaining 37 as junior.

Among female healthcare professionals, the first impression reported for Picture 1 was overwhelmingly of the young woman, with a significant odds ratio of 4.17 compared with men (Box 2). There was a tendency for medical personnel to see the young woman and for surgeons to see the old woman, although this did not reach significance. Seniority and age did not seem to affect initial perception.

With Picture 2, female respondents consistently saw the young cowboy compared with male respondents, who tended to see the old cowboy (Box 2). Again, affiliation, seniority and age did not seem to affect initial perception.

There was no sex-related difference in how people perceived Picture 3. However, junior doctors and medical students were significantly more likely to recognise the word than consultants or registrars (OR, 3.1; Box 3), while there was a trend for surgeons to be more likely than medical staff to do so. Overall, those who recognised the word were significantly younger (age difference of almost 7 years). Box 3 also indicates a trend for surgeons and younger, junior staff to recognise the word faster than their medical or older colleagues, although this trend did not reach statistical significance.

In examining staff members’ ability to form a second impression (ie, to see the alternate image after seeing their first image), we found that junior staff were significantly more likely to see the second image than senior staff, with an odds ratio of 2.5 (95% CI, 1.0–6.2). This appeared to be independent of age. There was also a trend for surgeons to recognise a second image better than their medical colleagues. This trend reached significance for Picture 2, with surgeons being almost 10 times more likely to see the second image than their medical colleagues (OR, 9.95; 95% CI, 1.2–80).

Our study is an initial exploration of differential perception among clinicians and allied healthcare staff. Because the sample size was small, we could only use univariate analyses, and the resulting confidence intervals are wide. Nevertheless, our study affords certain insights into sex-based perceptions, concreteness of thinking, and mental flexibility.

In both Pictures 1 and 2, women tended to see the young image first, and men tended to see the old image first, regardless of whether that image was of a male or female. This does not match the stereotype described by Pease and Pease, and indicates to us that medicine attracts a different calibre of man, perhaps more akin to the sensitive “new-age” guy. We believe that this is cause for celebration, and requires breaking open a six-pack over a good game of footy on TV, as soon as we locate the remote control.

Most men and women recognised the word “FLY” in Picture 3. This again flies in the face of popular stereotypes, indicating that both sexes in the healthcare profession are capable of conceptual, abstract thought. One female psychiatrist mistook the word “FLY” for her mother. One man, however, perceived the picture as a map of the hospital parking lot, raising the link between map-reading and sex; or the male obsession with car parking. This will have to be mapped out further in investigator-driven studies.

It is also encouraging that surgeons were able to recognise the word “FLY” more often and more quickly than their medical colleagues. This is congruent with the three-dimensional spatial ability required of surgeons in their professional work; nothing is more reassuring than a surgeon looking for a tumour during laparotomy and seeing it straight away. However, medical staff in the survey proposed the alternative explanation that surgeons might have recognised the word “FLY” because it is a derogatory term often levelled at their medical colleagues (which relies on the perception that medical staff buzz around the patient and do nothing). The poorer recognition of the word by medical personnel may be the result of the averse response conditioned by this term. We will therefore have to repeat this test using another, more neutral, word like “fee”, derived after focus-group discussions.

If these results prove consistent, we believe that such pictures should be used in surgical training entrance examinations and accreditation in the interests of evidence-based recruitment.

Junior staff were also able to see the word “FLY” more often and more quickly than senior staff. Moreover, after seeing their first impression on Pictures 1 and 2, they were able to switch to seeing the second image more often than their seniors. This was linked to age, with a difference of seven years, in Picture 1, but independent of age in Picture 2. One possible interpretation is that tomorrow’s physicians are flexible and can think laterally. Hopefully by the end of their training, which, incidentally, averages seven years, they may become as inflexible as their senior role models. 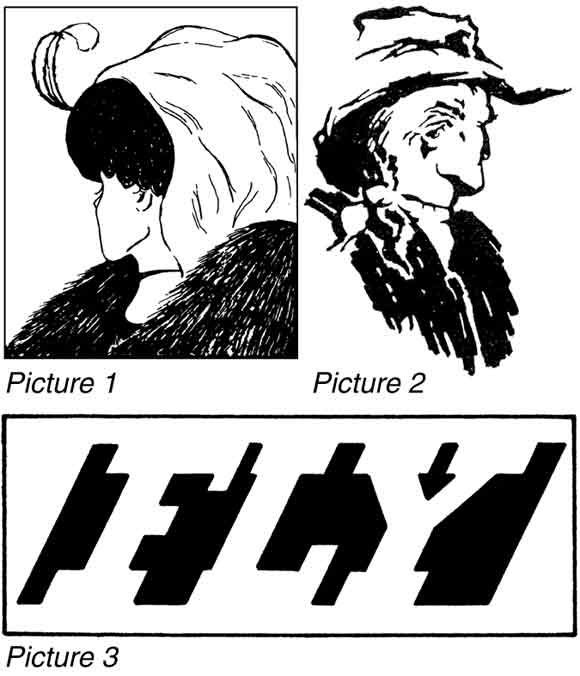 2: First impression of Pictures 1 and 2

3: First impression and time taken to see “FLY” in Picture 3

B N is a sensitive, new-age guy who obtained permission from his young wife to do the study. J A is a Canadian who doesn’t drink beer, but is learning the rules of “the footy” after moving to Australia. S M is a librarian still searching for the word “FLY”. K H knows what you are thinking, but has not hidden the remote; she was invited to join the team to provide equity between the sexes. S B is a statistician, who has nothing to add.