Is four a deadly number for the Chinese?

Background: The numbers 4, 14 and 24 are associated with death for Cantonese-speaking Chinese people, as the words for these numbers sound like the words for “death”, “must die” and “easy to die”, respectively. A previous study in the United States investigating psychological stress engendered by fear of the number 4 found more cardiac deaths in Chinese and Japanese people, compared with white Americans, on the 4th day of the month.

Objective: To determine whether more cardiac deaths occur in Hong Kong Chinese people on the days of the month with “deathly connotations” (4, 14 and 24).

Design: Analysis of mortality data (1995–2000) of the Chinese population of Hong Kong from the Census and Statistics Department of the Hong Kong Government for these three days of the month, compared with the remaining days, according to both the Gregorian and Lunar calendars.

Conclusion: Our study of Hong Kong Chinese people does not support the concept that more cardiac deaths occur in Cantonese people on the 4th, 14th and 24th day of the month.

Psychological stress, perhaps involving endocrinological mechanisms, can lead to heart disease.1 Patients with coronary artery disease have been described as exhibiting an exaggerated cerebral cortical response to mental stress,2 and another study has found that, in such patients, the presence of mental stress-induced ischaemia predicts subsequent death.3

Recently, Phillips et al investigated the effect of the psychological stress associated with fear of the number 4. According to these authors, the word for “four” in Mandarin, Cantonese and Japanese sounds very like the word for “death”.4 They reported that in America there are more cardiac deaths in Chinese and Japanese people compared with whites on the 4th day of the month. This phenomenon was termed “the Baskervilles effect”, based on the fictional story by Sir Arthur Conan Doyle, “The hound of the Baskervilles” in which Sir Charles Baskerville has a fatal heart attack induced by extreme psychological stress.

We contend that the word for “four” sounds like the word for “death” only in Cantonese, and for Cantonese people four is regarded as a bearer of bad luck. However, to a Mandarin-speaking Chinese, there may not be an aversion to the word “four”. To the Japanese, four has both lucky and unlucky connotations. In Cantonese, 14 and 24 have even more “deathly” connotations, as these words sound like “must die” and “easy to die”, respectively.

These three numbers evoke discomfort in Cantonese people, especially concerning events related to death. They avoid saying the word “four” at the Lunar New Year, and the aversion to the use of these three numbers is quite apparent, for example, when visiting some high-rise buildings in Hong Kong, where Floors 4, 14 and 24 are often “missing” (Box 1).

As the study by Phillips et al4 was conducted in the United States, it could be argued that the practice and beliefs of traditional Cantonese culture may not be as strong there as in Hong Kong, for example. Furthermore, a second study based on the same data was not able to demonstrate an increased mortality rate on the 4th day of the month.5 Among the points of contention raised were the heart disease classification codes chosen by Phillips et al for their various studies.4,6,7

We used the same codes as Phillips et al4 (ie, codes 410–414 of the International statistical classification of diseases, injuries and causes of death, 9th edition [ICD-9]) for the years 1995–2000 to test “the Baskervilles effect” in Hong Kong, where over 95% of the population is Cantonese speaking, and where cultural beliefs, including numeral superstitions, have a strong influence. Phillips et al only studied the incidence of death associated with the 4th day of the month in the Gregorian calendar. However, if this day, or the other “deathly” days, are bearers of misfortune, they are more likely to be associated with the Chinese Lunar calendar, which determines all Chinese cultural events (eg, the Lunar New Year).

Thus, we studied cardiac mortality rates on the 4th, 14th and 24th days of the month in both the Gregorian and Lunar calendars. We also looked at the influence of the 3rd and 8th day of the month on cardiac mortality, as the numbers 3 and 8 are perceived as lucky by the Cantonese. In Cantonese, the word for “three” sounds like “life” or “longevity”, and number 8 is associated with prosperity and is a highly desired number (eg, for car licence plates).

Mortality data for 1995–2000 for the Chinese population only (persons categorised as having resided in Hong Kong, China, Taiwan and Macau) were obtained from the Census and Statistics Department of the Hong Kong Government. Daily death rates were recorded for all causes, and for cardiac mortality encompassing ICD-9 codes 410–414 (acute myocardial infarction; other acute and subacute forms of ischaemic heart disease; old myocardial infarction; angina pectoris; and other forms of chronic ischaemic heart disease, respectively).

The Hong Kong Census and Statistics Department started recording dates of death according to the Gregorian calendar in 1995. We converted these dates to Lunar dates using the Western–Chinese Calendar Converter.8 We excluded days (and deaths on those days) not common to all months in each calendar (29th, 30th and 31st for the Gregorian calendar and 30th for the Lunar calendar).

After eliminating incomplete records, statistical analysis was performed using the Poisson regression model using Statistica software.9 The number of cardiac deaths (encompassing ICD-9 codes 410–414) on each day of the month were considered as the dependent variable, and the unlucky days (4th, 14th and 24th combined), or the lucky days (3rd and 8th combined), versus the remaining days were treated as the independent variable. The statistical significance of the difference in mean cardiac mortality for the two comparison groups was tested by the deviance difference test statistic (which follows a χ2 distribution) before and after adding in the group effect.10

We found no difference in cardiac mortality on the three “unlucky” dates compared with other dates in the month, whether determined by the Gregorian or, perhaps more appropriately, the Lunar calendar. Compared with the study by Phillips et al,4 our study was performed in a place where most people are Cantonese and Cantonese culture and beliefs are strong.

Smith,5 using the same data as Phillips et al4, was not able to demonstrate increased mortality on the 4th day of the month, and commented that the findings of Phillips et al only applied if several categories of cardiac mortality were excluded. Our study used the same ICD-9 codes as in the study by Phillips et al,4 but we did not find increased mortality on the 4th, 14th or the 24th days of the month. We also examined the number of suicides on the perceived “unlucky” and “lucky” dates (data not shown), and, again, could not find any association.

In conclusion, in Hong Kong, a predominantly Cantonese-speaking Chinese society, numbers with a four are avoided by the populace, but their calendric re-occurrence has no influence on cardiac mortality. Our study does not support “the Baskervilles effect” and we conclude, on a lighter note, that perhaps the hound was barking up the wrong tree.

1: List of the floors in a high-rise building in Hong Kong 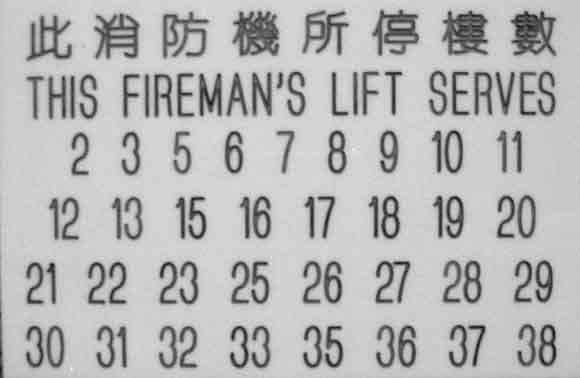 Number of deaths (95% CI) from heart disease by day of the month according to the Lunar (A) and Gregorian (B) calendars among Hong Kong Chinese people, for the period 1995–2000. Days not common to all months are excluded from each calendar.

Data used in the study were purchased from the Census and Statistics Department of the Hong Kong Government. We are indebted to Dr Donald Lyon for reading the manuscript; Mr Peggo Lam, Professor Joseph Lau and Mr Eric Wong of the Centre for Clinical Trials and Epidemiological Research for their help and advice on statistics; and to Dr Robert Cheung for the photo of the notice in the fireman’s lift.