A 51-year-old woman was transferred to the Royal Brisbane Hospital from a country hospital, where she had presented with fever, sweats and an increasingly painful swelling of the jaw 5 days after removal of a wisdom tooth. The tooth had been removed by a general dentist, after a complaint of pain and swelling associated with it. The following day she had noticed an intraoral swelling that progressed over the week to become apparent extraorally.

At presentation, she had difficulty swallowing and speaking. Although alert and oriented, she was febrile, had a “husky” voice and was starting to drool. Examination revealed a large sublingual, brawny mass extending bilaterally, bilateral submandibular swelling, and a swollen, protruded tongue.

An emergency nasal fibreoptic intubation was performed in the operating theatre, where incision and drainage produced a large amount of purulent material. Cultures of this material grew Streptococcus milleri sensitive to penicillin, and the patient continued to receive intravenous ampicillin. An orthopantomogram (OPG) revealed a tooth root in situ after the extraction. The woman was discharged on Day 7 postoperatively with a diagnosis of Ludwig’s angina secondary to an infected extraction socket.

A 48-year-old woman presented to the emergency department (ED) with headache and left-sided weakness, initially diagnosed from a computed tomography (CT) scan as a right parietal stroke. Magnetic resonance imaging (MRI) showed a parietal mass consistent with a tumour (Box 1, A). Using stereotactic craniotomy, purulent material was drained from the lesion, and S. milleri and Actinobacillus actinomycetemcomitans were grown on culture.

Further investigation by the maxillofacial surgery team revealed two right maxillary premolars that were tender to percussion and radiolucencies at the root apexes on the OPG. The two teeth were removed and the sockets were cleaned by curettage and irrigation. Transthoracic and transoesophageal echocardiography excluded infective endocarditis as a complication.

After 8 weeks’ treatment with intravenous benzylpenicillin, ceftriaxone and metronidazole, the woman’s neurological deficits resolved and an MRI scan showed scar tissue in the right parietal lobe without reaccumulation of pus.

A 42-year-old woman presented to the ED with a 3-day history of constant right submental pain (no worse with eating) and swelling. She was given analgesia and sent home, but returned the next day with worsening symptoms. She was referred to the oral and maxillofacial surgery service.

The patient gave a history of a “partial” right submandibular gland removal 10 years previously after recurrent sialoadenitis. She looked well, had no dysphagia or difficulty breathing, was afebrile and had no respiratory distress. There was a right submandibular scar consistent with her past history, moderate submandibular swelling and submandibular and deep cervical lymphadenopathy. A hard lump was felt in the floor of the mouth, but the tongue and floor of the mouth were not elevated. An OPG demonstrated a right-sided oval-shaped radio-opaque structure, confirmed on axial CT to be in soft tissue on the lingual side of the mandible. No odontogenic lesions were seen.

The patient was diagnosed with infection secondary to a retained submandibular duct stone. She was admitted and given intravenous ampicillin and metronidazole. While she was awaiting surgery for removal of the stone, the swelling rapidly progressed over 12 hours, resulting in elevation of the tongue and difficulty in swallowing. Emergency awake fibreoptic nasal intubation and surgery were performed. No abscess was found, but two calculi were removed from the remaining portion of the submandibular duct. The patient, still intubated to protect her airway, was transferred to the intensive care unit. As the swelling of the tongue and floor of the mouth worsened postoperatively, she remained intubated for 3 days. When she became febrile (38.2°C), ampicillin and metronidazole were discontinued and she began treatment with intravenous ticarcillin and clavulanic acid. She was discharged on postoperative Day 4, with instructions to take oral amoxicillin 750 mg with clavulanic acid twice daily for 5 days. She made an uneventful recovery.

A 28-year-old man presented to the ED of a regional hospital with left submandibular pain and swelling after having a dental filling 10 days previously in the lower left second molar. The patient was given analgesia and sent home.

After a few days, the patient presented to another regional hospital with worsening symptoms. He was given oral amoxycillin and metronidazole and discharged. But the swelling and pain progressed until an inability to swallow saliva prompted him to return to the second hospital.

On examination, the patient had difficulty breathing through the mouth. Marked left submandibular swelling, severe trismus and halitosis were noted. He was afebrile, but had a white cell count of 16.3 x 109/L (normal range, 4.0–11.0 x 109/L), neutrophilia of 13.1 x 106/L (normal range, 2.0–7.5 x 109/L) and a serum C-reactive protein level of 207 mg/L (normal range, < 10 mg/L). An OPG revealed a deep dental filling of the lower left second molar and a carious lower left wisdom tooth.

He was admitted for airway observation and given intravenous benzylpenicillin and metronidazole. The next day he was unable to completely open his mouth. After awake fibreoptic intubation, the two teeth were removed and the abscess drained. (The clinical and radiological findings for a patient with a similar diagnosis are shown in Box 1, B–D.)

Numerous complications are attributed to maxillofacial infections, including Ludwig’s angina, mediastinitis, cerebral abscess, maxillary sinusitis, chronic fistulous tracts and infective endocarditis.These may result from a delay in adequate treatment of the original focus of infection, and may turn a minor problem into one with dangerous complications. Infections in the sublingual or submandibular space are not contained by any anatomical barriers and may spread to the mediastinum or diaphragm via the contiguous fascial spaces of the neck.1

Ludwig’s angina is defined as bilateral cellulitis of the submandibular and sublingual spaces.2 The adult mortality rate from the disease is reported to be between 4% and 10%.3 Ludwig’s angina has the potential to spread rapidly, resulting in mediastinitis and airway obstruction.2,4

Common clinical features of odontogenic infections (which may progress to cause significant maxillofacial infections) are summarised in Box 2. An OPG may reveal evidence of odontogenic infection. Other investigations, such as CT scans of the jaws and neck and blood investigations (eg, full blood count, electrolytes/urea/creatinine levels, procalcitonin level [an indicator of infectious processes] and blood cultures), may be ordered if clinically indicated. Clinical signs warranting prompt hospital referral include dysphagia, difficulty with or pain on moving the tongue, stridor, trismus, elevation of the tongue, and fever.

It is inadvisable to treat these patients only with analgesia and antibiotics, as surgical drainage of the abscess or removal of the focus of infection is also required.5 An otherwise well patient with no systemic signs of infection, cellulitis or airway compromise does not require antibiotics once the source of the infection has been eliminated. With respect to odontogenic abscesses, this may involve extraction of the offending tooth or teeth, with drainage via the extraction socket, or may require intraoral and/or extraoral drainage. If the patient’s medical condition allows it, and if dentally suitable, the responsible tooth or teeth may be endodontically treated, allowing the patient to retain the tooth.

When indicated, antibiotics that cover the expected mixed anaerobic and aerobic nature of oral infections should be chosen. Suitable choices include intravenous ampicillin (1 g four times a day) together with metronidazole (500 mg three times a day).5 For patients allergic to penicillin, clindamycin is a possible alternative. The regimen should be modified in response to culture and sensitivity results.

Suppurative salivary gland infections are often caused by Staphylococcus aureus, for which treatment with dicloxacillin or flucloxacillin is appropriate.

1: Manifestations and complications of maxillofacial infections 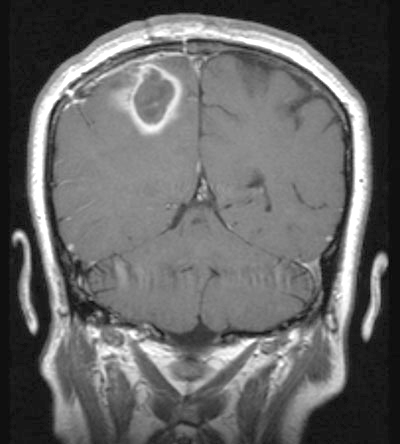 B: Right submandibular swelling secondary to an abscess of the lower right second molar tooth (case not described here but similar to Patient 4). 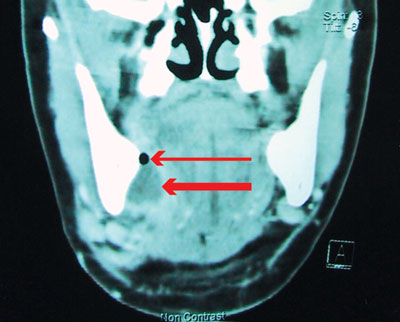 C: Computed tomography scan (coronal view) of Patient in B, showing a collection (thick arrow) adjacent to the medial surface of the right mandible (a gas bubble [thin arrow] is also visible).

D: Aspiration of pus from Patient in B.