Bilateral facial paralysis: what’s the cause?

A 62-year-old woman with longstanding, well controlled type 2 diabetes mellitus and hypertension initially presented with a 2-day history of acute, partial right-sided facial weakness. The facial paralysis was not accompanied by hyperacusis, and taste sensation was preserved. The patient presented again 2 weeks later with complete paralysis of the left facial nerve and only partially resolved right-sided symptoms. No other central or peripheral neurological signs or symptoms were elicited during either presentation. As bilaterality makes facial neuropathy a more ominous sign of various known conditions,1,2 we carried out prompt further investigation.

Results of haematological and biochemical assays, including liver function tests, were unremarkable. Specifically, the serum angiotensin-converting enzyme (ACE) level was 42 U/L (normal range, 30–50 U/L). Results of urinalysis and cerebrospinal fluid examination were also normal (although the latter did not include oligoclonal IgG and ACE assays). Nerve conduction studies and electromyography findings were consistent with denervation of the facial nerves. Electroneurography of lower limb nerves showed normal nerve conduction bilaterally.

No abnormality was detected on chest x-ray or brain magnetic resonance imaging. However, a computed tomography scan of the chest showed bilateral hilar lymphadenopathy with bilateral basilar lung infiltrates (Box, A). A transbronchial biopsy revealed a single, non-caseating granuloma (Box, B).

The patient was discharged from hospital with instructions to take 30 mg prednisone daily for a month (because of her diabetes, she was given half the ideal dose of 1 mg/kg per day). After 1 month of treatment she showed marked improvement, and the dose was gradually reduced over the following month.

This is an unusual case of sequential or “consecutive” bilateral facial paralysis — in which unilateral facial palsy was followed by contralateral facial palsy before the side affected first had recovered — in association with biopsy-proven pulmonary sarcoidosis. This case makes the point that a normal chest x-ray does not, unequivocally, exclude hilar lymphadenopathy.

Although sarcoidosis is known for its unusual and protean manifestations, including neurosarcoidosis, we are aware of only two other case reports of bilateral facial paralysis as the sole presenting feature of sarcoidosis.3,4

However, we cannot exclude the possibility that the facial weakness seen in this case was related to type 2 diabetes or another aetiology, such as Bell’s palsy. 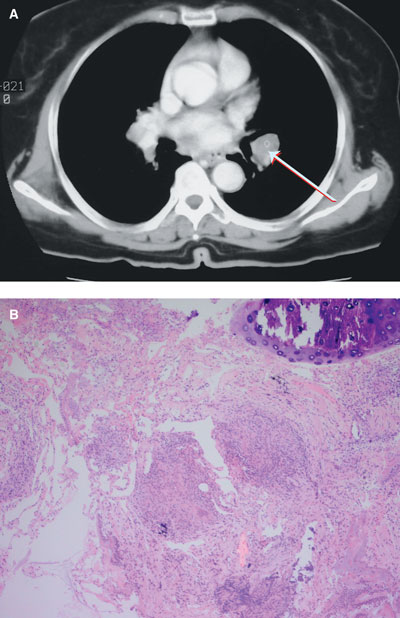