Epithelial ovarian malignancies occur in over 1000 Australian women annually, and more than 75% of these women eventually succumb to the disease.1

Women with early-stage ovarian cancer have a 5-year survival rate of over 80%, suggesting that early detection may improve survival. To date, it has not been established whether benign (assessed histologically as non-invasive) or borderline ovarian tumours are premalignant. In the absence of a precancerous lesion, the goal of screening is the detection of preclinical disease.

A number of screening tests have been evaluated or are being evaluated currently. These include bimanual pelvic examination, ultrasound examination (Box), with or without colour Doppler flow imaging, and measurement of various circulating proteins.

In particular, screening by measuring CA 125 level and performing transvaginal ultrasound examination appears to provide the highest specificity and positive predictive value for the detection of ovarian cancer.4

The CA 125 plus ultrasound screening strategy is currently on trial in the United Kingdom and the United States.

Groups at high risk for ovarian cancer include:

Studies exploring the value of screening these women for ovarian cancer are lacking and are urgently required. Even though population-based screening for ovarian cancer is not recommended, and although there is no level of evidence that this group of women should undergo screening, it seems prudent that, until evidence to the contrary is available, measurement of CA 125 levels and transvaginal ultrasound be undertaken at least on a yearly basis. Certainly, women who may have gene mutations should be referred to family cancer clinics for counselling.

New technologies have increased the possibilities for ovarian cancer screening. The use of genomics and proteomics to identify specific proteomic patterns, gene expression and genetic alterations, using serum or urine, may revolutionise our ability to screen for this disease.9 These new developments will hopefully be of use in population screening.

Ultrasound examination of the ovaries 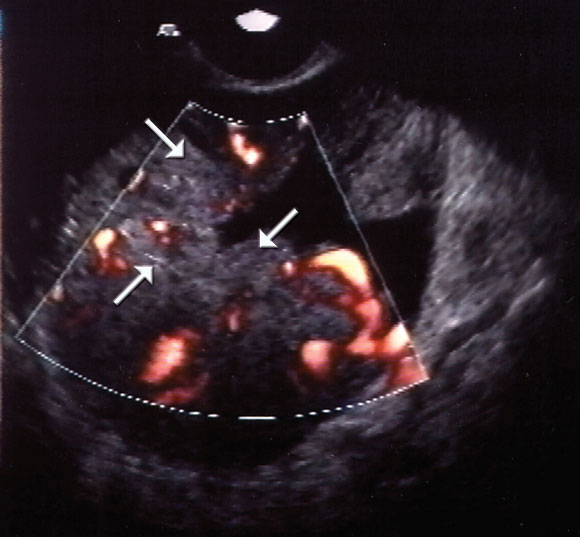 We are grateful to Dr N Woodrow for the ultrasound image.