Initial experience with capsule endoscopy at a major referral hospital

Objectives: To determine the utility of capsule endoscopy in patients referred for investigation of suspected disease of the small intestine.

Conclusion: Capsule endoscopy is a novel, minimally invasive and useful tool for the investigation of the small intestine.

The small intestine remains difficult to investigate with available technology. Push enteroscopy allows examination of only up to 80–120 cm beyond the ligament of Treitz,1 while intraoperative enteroscopy involves a general anaesthetic and laparotomy. Barium follow-through and enteroclysis (double contrast small-bowel follow-through) allows indirect examination of the small bowel, but has a low yield, especially in detecting flat pathological lesions such as vascular malformations.2 Capsule endoscopy provides an alternative to overcome the limitations of these methods.

Capsule endoscopy is known also as capsule enteroscopy, wireless endoscopy, and the "pill cam". It is performed using the Given M2A Capsule Endoscope (Given Imaging Pty Ltd, Yoqneam, Israel), a device that measures 11 mm by 27 mm and consists of an optical dome, four light emitting electrodes, a sensor, two batteries and a microtransmitter. Once swallowed, the capsule is propelled through the small intestine by peristalsis. The capsule acquires and transmits digital images at the rate of two per second to a sensor array attached to the patient's abdomen. A recording device worn on a belt stores these images. At the end of the examination, the images are transferred to a computer and reviewed. Total recording time, limited by the battery life of the capsule, is 6–8 hours.

The use of the capsule in 10 normal human volunteers was first described in May 2000.3 Since then, more than 8000 capsule examinations have been performed.4 We report our initial experience of capsule endoscopy at a major referral hospital.

By definition, all patients with OGB had no abnormalities found on complete gastroscopy and colonoscopy.

Patients with suspected small-bowel Crohn's disease may or may not have had a previous diagnosis of Crohn's disease. The suspicion was based on a combination of clinical features, including pain, diarrhoea and weight loss, raised levels of inflammatory markers and abnormal radiological or endoscopic findings. These patients were required to have a prior small-bowel barium study to exclude strictures.

All patients referred for investigation of the small bowel were assessed for eligibility. Exclusion criteria included a cardiac pacemaker, pregnancy, dysphagia and known small-bowel strictures. Patients fasted from midnight, and in the morning swallowed the capsule endoscope with a glass of water mixed with simethicone (1 mL), which helps eradicate small bubbles in the small bowel. After 8 hours, patients returned to have the recording equipment removed.

Capsule images were reviewed by two gastroenterologists, and questionable findings were discussed. Positive findings were defined as detected abnormalities that were potentially related to the presenting problem. We considered blood seen in isolation in the small bowel as a positive finding. Blood alone is not a diagnosis, but may be helpful in localising the source and support the use of more invasive procedures such as intraoperative enteroscopy.

This study was approved by the St Vincent's Hospital Research Ethics Committee.

Sixty patients underwent 61 capsule endoscopy procedures. Thirty-six patients (60%) were men. The age range was 17–86 years (mean, 56.1 years). The indications and findings in these patients are shown in Box 1.

In 47 patients with OGB, abnormal findings (Box 2A) were detected in 32 (68%). Four had abnormalities detected in the stomach, and one in the caecum. Eight had abnormalities judged to be within reach of push enteroscopy. Eighteen of the 47 (38%) patients had a change in management as a result of capsule endoscopy (Box 3).

In one patient referred with OGB and abdominal pain, the capsule was not excreted. This was confirmed on an abdominal x-ray and computed tomo-graphy scan of the abdomen. At laparo-tomy, the capsule was found to be proximal to an ileal stricture, and a small-bowel resection was performed. Histological results were consistent with Crohn's disease.

Of the nine patients referred for investigation of small-bowel Crohn's disease, none had been taking non-steroidal anti-inflammatory drugs (NSAIDs) before onset of their symptoms. Small-bowel erosions or ulcers (Box 2B) were seen in seven of these nine patients. Enteroclysis demonstrated mucosal irregularity in two of the seven patients with abnormal findings on capsule endoscopy. Management was changed in five of the nine patients. One patient was lost to follow-up. Changes in management are summarised in Box 4.

Four patients were referred for other indications (Box 1). No abnormality was seen in the patient with hereditary non-polyposis colorectal cancer (HNPCC), but the examination was incomplete. A subsequent laparotomy revealed an adenocarcinoma in the distal small bowel. A patient with Peutz–Jeghers syndrome had multiple small polyps and erosions in the ileum. Her management was changed in that surgery was deferred.

The range of the capsule battery life was 282–495 minutes (mean, 424 minutes). A complete examination of the small bowel, determined by definite visualisation of the caecum, was obtained in 77% (46/60) of patients.

In our cohort, OGB was the main indication for referral for capsule endoscopy. For investigating OGB, this technique has been reported to have a greater yield than push enteroscopy;6-9 this is similar to our experience.2 In addition, although the reported yield for push enteroscopy in OGB is 38%–75%, the true yield is lower because many of these findings (28%–75%) are within reach of an endoscope.10 Therefore, a repeat endoscopy is justifiable in OGB. However, push enteroscopy is still useful for biopsy and applying local therapy beyond the reach of a normal endoscope. A repeat colonoscopy is also appropriate in OGB, as lesions may be missed on the first colonoscopy,10 especially if the bowel preparation was suboptimal. Hence, we suggest repeating upper and lower endoscopies before capsule endoscopy. We propose an algorithm for investigating OGB in Box 5.

Capsule endoscopy has been reported to have a greater yield than small-bowel barium follow-through in evaluation of small-bowel disease.11 Our experience is similar. In our initial 20 patients with OGB, none had positive findings on barium studies. This included six patients with arteriovenous malformations, one with a gastrointestinal stromal tumour in the duodenum and another with an ileal stricture and erosions. Despite their low yield,10 small-bowel barium studies are still useful in ruling out significant strictures in some patients with suspected small-bowel Crohn's disease, symptoms suggestive of small-bowel obstruction and a history of prolonged NSAID use prior to capsule endoscopy. NSAIDs may cause "diaphragm-like" strictures that impede passage of the capsule.12

In suspected Crohn's disease of the small bowel, our results are similar to other studies. These have reported an increased yield in detecting erosions and ulcers missed by conventional investigations, including ileoscopy and small-bowel barium studies.4,13 Our findings led to a change in management in five out of seven patients followed up (Box 4). We believe that capsule endo-scopy is useful in two distinct situations. First, in investigating patients with suspected de novo small-bowel Crohn's disease based on specific criteria, including abdominal pain, fever, weight loss, anaemia, elevated erythrocyte sedimentation rate but negative results on conventional investigations.4 Second, in patients whose clinical and laboratory findings are out of keeping with the known extent and severity of disease using conventional investigations.

Although we have investigated only two patients with pain as a predominant symptom, we suspect that the yield will be low in this group unless there are other clinical features and investigations suggestive of organic pathology.

All the capsules in this study used the original version of the battery. Improvements in the battery life and power consumption of the capsule are expected to increase the proportion of completed small-bowel studies.

The major limitation of our study and other studies is the lack of a gold standard, such as intraoperative enteroscopy, to determine accuracy, sensitivity and specificity. Terms such as "diagnostic yield" and "positive findings" are crude measures, as the rates of false-positive and false-negative results are unknown. In addition, the clinical significance of a finding is sometimes difficult to ascertain. Examples include small non-bleeding arteriovenous malformations and submucosal masses. The significance of these findings and clinical outcomes will only become known with longer term follow-up. 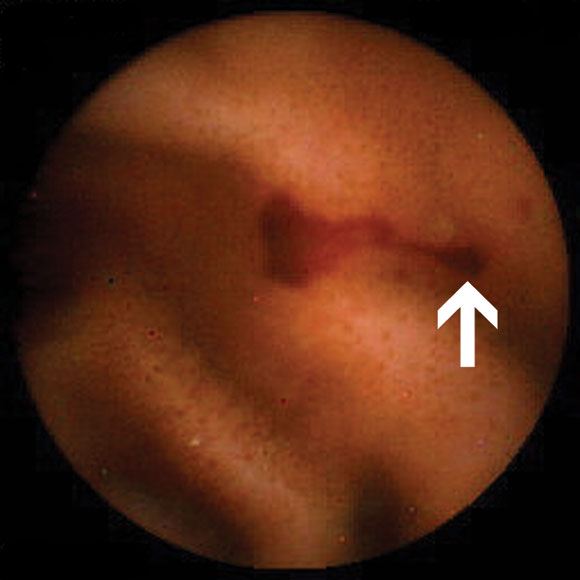 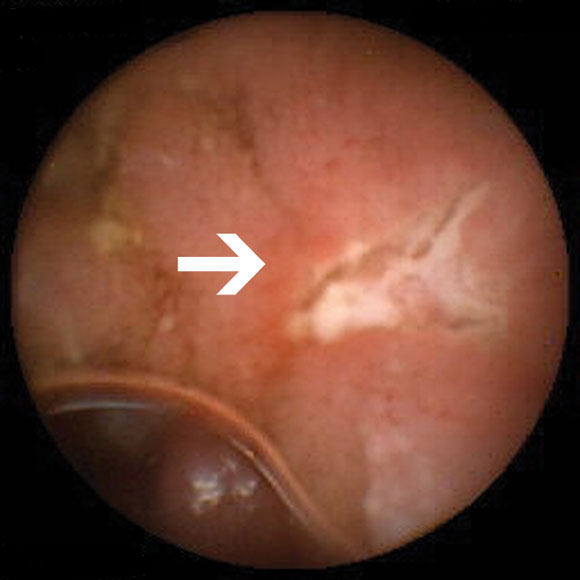 B: Small bowel erosion or ulcer

3: Changes to management after capsule enteroscopy for patients with obscure gastrointestinal bleeding (OGB)

4: Changes to management after capsule endoscopy for patients with suspected small-bowel Crohn's disease

André Chong is supported by an NHMRC Medical Postgraduate Scholarship. The first 20 investigations in this study were sponsored by Given Imaging, Yoqneam, Israel.