In Nepal, a 28-year-old security guard presented with a seven-year history of peripheral joint pain and clubbing of the fingers and toes (Box, Figure A). He had first noted swelling of his wrists and metacarpophalangeal joints at the age of 16 years, and later his ankles and knees were also affected. The joints were intermittently painful, particularly after he consumed alcohol. The clubbing had developed insidiously. He reported that his brother had similar swelling of the fingers and toes. He also reported excessive perspiration, erectile dysfunction and diminished libido.

The skin of his scalp and face was greasy and thickened, with corrugations on the scalp and deep nasolabial folds. Both knee and ankle joints were swollen, red and warm.

The patient had no abnormal respiratory, cardiovascular or gastrointestinal symptoms. A full blood count, liver and thyroid function tests, blood sugar level, and serum levels of electrolytes, urea and creatinine were all normal. The erythrocyte sedimentation rate was raised (46 mm/hour). Tests for antinuclear antibodies, including antibodies to Scl-70 (associated with scleroderma) and rheumatoid factor, were negative. The synovial fluid was a clear straw colour with normal viscosity, lymphocyte count and protein level.

A chest x-ray was normal, but x-ray of the wrist showed periosteal elevation and periosteal reaction at the distal end of the radius (Box, Figure B).

The patient showed typical features of primary hypertrophic osteoarthropathy1 (also known as pachydermoperiostitis). This diagnosis is made after excluding the secondary form of hypertrophic osteoarthropathy that is associated with a variety of disorders, including intrathoracic malignancies, suppurative lung disease, and congenital heart disease.1 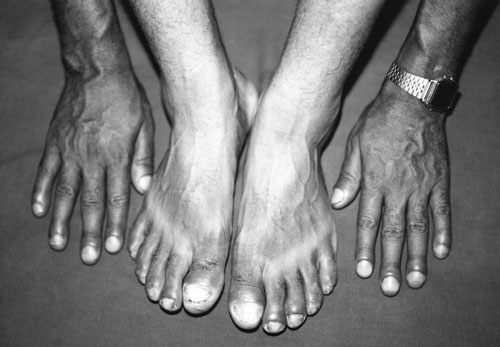 A: Clubbing of fingers and toes. 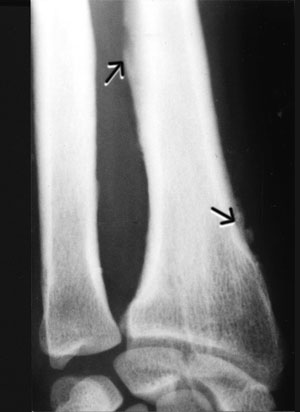 B: X-ray of wrist, showing periosteal elevation and periosteal reaction at distal end of radius.