A 39-year-old man was investigated for three episodes of facial swelling following dental procedures performed between 1999 and 2001. On two occasions the patient was hospitalised and given intravenous antibiotic treatment for cellulitis.

The facial swelling was ipsilateral to the dental procedure, unresponsive to antihistamines and not associated with urticaria, laryngeal oedema or bronchospasm. It occurred within about 12 hours of the procedure and resolved over several days. The patient reported a history of rash after penicillin exposure but no prior reactions to local anaesthetic agents. Full blood count, serum complement C3 and C4 levels, C-1-esterase inhibitor level and function were all within the normal range. An antinuclear antibody test was negative, IgE levels were not raised and no latex-specific IgE was detected.

Skinprick, intradermal and subcutaneous testing with normal saline, the amide anaesthetics lignocaine and citanest, and the ester anaesthetic procaine showed no evidence of an immediate type 1 allergic reaction. However, two days later the patient reported that a raised area of skin had appeared. Subcutaneous injection with lignocaine resulted in a localised raised erythematous rash 48 hours after injection. A less intense reaction occurred with citanest, and no reaction was detected with procaine or normal saline alone. Histopathology of the skin biopsy from the lignocaine challenge site is shown in Boxes 1 and 2. 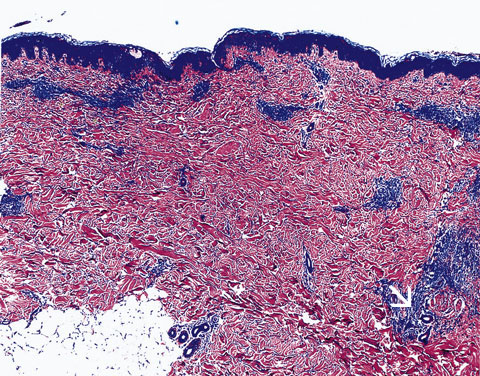 A dense dermal lymphocytic infiltrate was present around vessels (arrow), with focal spread into the papillary dermis. (Skin from the procaine challenge site showed no such infiltrates.) 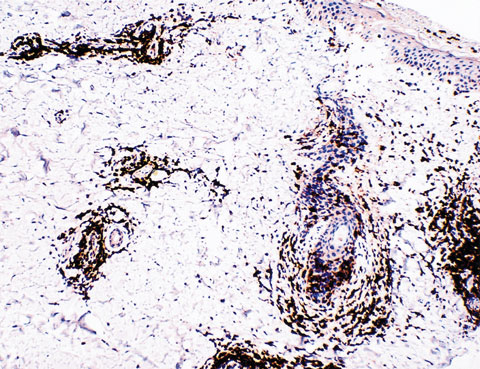