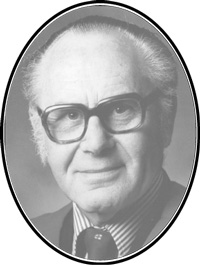 Max Dunstone was born in Adelaide on 6 July 1926. He was educated at Parkside Primary School, Prince Alfred College and Adelaide University, graduating in medicine in 1948. After a year as Resident Medical Officer at the Royal Adelaide Hospital, he entered general practice in 1950.

Max could be described as one of the best general practitioners in South Australia. He had a substantial obstetric practice, was an excellent family doctor, and excelled in the academic and research areas of general practice. He was discerning and sound in clinical diagnosis, conscientious and thorough. His thoughtfulness, kindness and compassion were appreciated by his patients, family and medical peers, who regarded him with much respect and affection. He even learned to speak Italian to develop better communication and empathy with his Italian patients.

Max was regarded by his colleagues as an excellent teacher. He recognised the wealth of medical information available in general practice and was able to use it in a practical way in developing the Research Committee of the Royal Australian College of General Practitioners (RACGP).

Max held other notable appointments during his career, including that of Medical Officer for the City of Adelaide Central Board of Health (1979–1994), Board member for the SA Cancer Registry Board (1976–1986), and Chairman of the Medical Records Committee and Peer Review Committee of the North Eastern Community Hospital (1978–2000).

Max's innovative approach to research was acclaimed by his peers. His research articles, some of which were published in the Medical Journal of Australia, were influential in the field of obstetrics in South Australia during the late 1970s. At that time, GP obstetricians delivered 84% of infants born in South Australia and Max made an assessment of their performance. His research was probably one of the contributing factors to the rise in standards of obstetric practice: by the early 1980s, South Australia had the lowest perinatal mortality rate in the world, at 5.5 per 1000 (compared with Sweden [8] and Australia [9]).

In his leisure time, Max enjoyed tennis, golf and stamp-collecting. He was of strong religious persuasion and was a warden of St Aidan's Anglican Church in Payneham, SA.

In 1986, he was made a Member of the Order of Australia "for service to medicine as a general practitioner for 36 years, with involvement in community-based medical research".

Max died on 7 April 2002 of cancer of the urinary tract. Vale to a great doctor of high achievement, integrity, equanimity and humility.