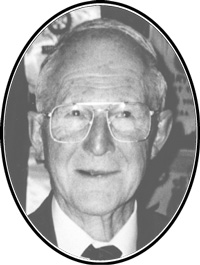 Edwin Cordeaux Blomfield was born on 25 December 1917 at Inverell, New South Wales. His early schooling was in the New England region and he completed his secondary education at North Sydney Boys' High School. While studying medicine at the University of Sydney (1936–1942), he stayed at St Paul's College. After graduating, he spent three years as a Resident Medical Officer at Hornsby District Hospital, where he met his future wife, Florence Kelsey, a nursing sister. They were married in 1945.

In 1947, after two years in the army, Ted set up a general practice at Pambula, on the far south coast of New South Wales. He was the sole medical practitioner, prescribing and dispensing medicines, attending clinics in adjacent towns, and visiting patients in isolated areas.

In 1949, Ted moved with his family to Bega. During his many years there, he delivered more than 3000 babies in the district, and was a great teacher to both nurses and doctors. He was highly skilled in surgery, anaesthesia and obstetrics, and, as there were no specialist doctors resident in Bega Valley until 1968, he had to deal with many emergencies of various kinds. He was also a foundation member of the Bega branch of St John Ambulance Australia in 1986, and over the years gave freely of his time teaching first aid and supporting the service.

Ted had a gentle nature and was generous and friendly, with a quick wit and an endless supply of jokes. He affected the lives of many people in his community. He contributed greatly to the life of St John's Anglican Church in Bega and was a long-standing member of the Rotary Club, which recognised his contribution with a Paul Harris Fellowship, one of its highest awards. He was a supporter of Little Athletics, Meals on Wheels, and other organisations. He was a director of the Bega and District Nursing Home and was involved with the planning of "Casuarina Hostel", an assisted-care facility for the elderly. In 1998, he was awarded the Medal of the Order of Australia for his services to the community.

Ted's hobbies included surfing and photography, and in later years, especially after his retirement in 1997, he enjoyed travelling to many parts of Australia.

Ted will be remembered for his dedication, sense of humour and caring nature. He was a humble man who always had time for people — one of nature's gentlemen.

Ted died on 12 December 2001 of pneumonia, a late complication of cardiac bypass surgery.