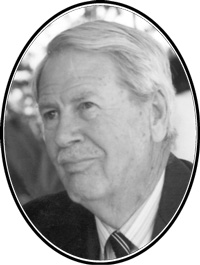 Ted Stuckey epitomised "quiet achievement". Born on 15 June 1908, he grew up in Inverell, in northern New South Wales, where he was dux of his school. Later, as a medical student living at St Andrew's College, Sydney University, he excelled academically and in sport. He represented the College in rowing, and played hockey for the College, the University, and a combined Australian universities' team.

After doing his residency at the Royal Prince Alfred Hospital and the Royal Alexandra Hospital for Children (RAHC), Ted married Joan Vowell and moved into general practice in Scone, NSW. While working in this practice he obtained his Master of Surgery degree.

Ted returned to Sydney in 1939 to become a paediatric surgeon, and was appointed Honorary Relieving Assistant Surgeon at RAHC. When war intervened, he joined the Field Ambulance Service. He served until late 1944 in Queensland, then New Guinea, becoming second-in-charge of the 111th Casualty Clearing Station and attaining the rank of Major.

From 1945, as Honorary Assistant Surgeon at RAHC, Ted and his colleagues did pioneering work in cardiothoracic and abdominal surgery. Ted's brother Doug was also part of the Congenital Heart Disease team that was involved in the early development of cardiac catheterisation and angiocardiography.

In 1948, Ted gained his Fellowship of the Royal Australasian College of Surgeons. In 1958 he was awarded a Fulbright scholarship to study at Harvard Medical School. From 1958 to 1966 he lectured in paediatric surgery at the University of Sydney. He continued at RAHC as an Honorary Consultant Surgeon until 1973.

In later years, Ted adopted a more relaxed lifestyle, doing sessional work with the Commonwealth Health Department until 1988 and Surgical Assistant work until 1994 (then aged 86!).

Ted was a founding member of the Medical Benefits Fund in 1945 and served on its Council until 1971. He was also heavily involved with the Australian Medical Association. He was a member (1953–1966) and president (1961–1962) of the NSW Branch Council; a member of the AMA Federal Council (1964–1966); Assistant General Secretary, then Deputy Secretary General (1966–1972); and Secretary General (1972–1973). He was made a Fellow of the AMA in 1964. He was secretary of the AMA/benefit fund working party, which produced a plan for a voluntary health insurance scheme that was largely adopted by the federal government and introduced in 1970. He was also a member of the Medical Benefits Schedule Advisory Committee.

Although deeply committed to his profession, Ted remained a devoted husband and father to his five children. Over the years, he built for his family a swimming pool, a terraced garden with a badminton court, and three unique folding caravans in which he loved to take them on camping holidays.