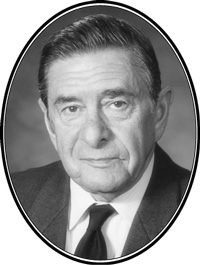 Joe Correy, an outstanding contributor to the field of obstetrics and gynaecology in Tasmania, died on 18 April 2002 of severe Parkinson's disease.

Joe was born in Manilla, New South Wales, on 17 June 1925, and moved to Sydney in 1930. Although his family was not well off, he won scholarships that enabled him to study medicine at the University of Sydney, from which he graduated in 1947.

After completing his residency at Sydney Hospital, he began training in obstetrics at the Royal Hobart Hospital. He married Lucy Denne in 1950 and went to Oxford, UK, in 1951. He obtained his Membership of the Royal College of Obstetricians and Gynaecologists in 1952 and returned home in the following year.

With his great personality, energy and ability, Joe built up a very successful private practice in Hobart over the next 15 years. In 1966, he received a William Morton Lemon scholarship to study ovulation induction in Melbourne, and returned to establish the Gynaecological Endocrinology and Infertility Clinics in Hobart and Launceston later that year.

In 1969, accepting an appointment as Director of Obstetrics and Gynaecology at the University of Tasmania's medical school, Joe began a remarkable transition from private practitioner to full-time academic, involving research work, training to run a university department, study and teaching.

By 1977 he had been promoted to the position of Professor, which he held until his retirement in 1990. With boundless energy and enthusiasm, he continued to take on new challenges throughout his academic career. In 1972, under a Brown Craig Travelling Fellowship, he studied ultrasound in the United Kingdom and returned to set up and run the first ultrasound service for pregnant women in Tasmania. In 1973–1974, he trained to acquire proficiency in pelvic cancer treatment. In 1981, he organised the IVF Clinic in Hobart, which he ran successfully for many years. He also initiated the collection of statistics for all public and private obstetric procedures in Tasmania.

He was made a Member of the Order of Australia in 1986 for services to medicine. He also became an Honorary Fellow of the Royal Australasian College of Surgeons in 1975 and received an Advance Australia Award in 1994.

Joe is survived by his second wife, Pam, and his three children and their families.