What we knowWhat we need to know

Knowledge of the natural history of childhood asthma is essential if the long-term benefits of therapy are be properly evaluated and patients properly counselled. A number of studies have followed children with asthma through childhood and adolescence into adult life, but few have characterised the severity of asthma at regular intervals through childhood.

The Melbourne Epidemiological Study of Childhood Asthma, which has followed children recruited at the age of seven or 10 years through adolescence to mid-adult years, is now the longest and most comprehensive longitudinal study of childhood asthma.1-4 In 1964, 401 children were randomly selected for the study out of a total of 30 000 seven-year-old children living in Melbourne. Of the participants, 291 had asthma and 105 were controls. A further 83 children with more severe asthma were brought into the study in 1967 at age 10 from the same age cohort.5 All participants have been followed prospectively at seven-year intervals up to, most recently, the age of 42 years. The series has been extensively reviewed elsewhere.6

At recruitment, children were classified as having "episodic asthma" (wheeze occurring only with respiratory tract infections) (n = 178); "persistent asthma" (wheeze not associated with infection) (n = 113); or "severe persistent asthma" (characterised by onset of symptoms before the age of three years, persistent symptoms at 10 years, barrel-chest deformity and/or reduction in the FEV1/FVC ratio to 50% or less) (n = 83).

At each review from the age of 21, the subjects were classified as follows:

The pattern of asthma during childhood is a strong predictor of outcome. Children with episodic asthma generally had excellent outcomes in adult life, with either complete resolution of asthma symptoms, or, for the minority, persistence of mild, intermittent symptoms. As a group, those with episodic asthma in childhood retained normal lung function into adult life. In contrast, the majority of children with persistent asthma had reduced lung function and continuing symptoms into adult life. There was no difference in lung function between the sexes. Females were slightly less likely than males to grow out of their asthma, but the difference was not significant.

In the Melbourne study,5 the sample was stratified to ensure equal representation of each of the asthma severity groups. Recent population studies in Australia suggest that 85%–90% of children with asthma have episodic asthma and only 10%–15% have persistent asthma, with a much smaller proportion experiencing severe disease.7

Extrapolating from data in the Melbourne study, and taking into account the general distribution of asthma in children, it would be expected that about 58% of all children with asthma would have complete resolution of symptoms by adulthood, while a further 11% would continue to experience infrequent episodic asthma. These results suggest less frequent resolution of asthma than reported in a UK cohort,3 in which 73% of those who reported wheezing in childhood had become asymptomatic by age 33 years, and in a Tasmanian cohort,8 in which 74% of wheezers had become asymptomatic by a similar age. The discrepancy may well be explained by differences in classification of children at recruitment.

The reduction in lung function in the Melbourne study was of a similar magnitude to that reported in the UK3 and Tasmanian8 cohorts. The presence of reduced lung function that, once established in childhood, undergoes relatively little further decline (seen in the Melbourne study) contrasts with a more rapid rate of decline observed in longitudinal studies of people with adult-onset asthma.9,10 This suggests that the pathological process involved in childhood asthma may be different from that in adult-onset asthma. In an adult Danish cohort,9 an increased rate of decline in lung function was seen only in those with newly acquired asthma and not in those whose asthma was present before the study period.

The impact of treatment on the Melbourne cohort is difficult to assess. Inhaled steroids were introduced into practice in Australia in the mid-1970s, when the study participants were in their late teens, at a time when their adult level of lung function had already been reached. It is interesting to speculate whether the use of inhaled steroids from early childhood might have prevented some of the initial decline in lung function.

In 1969, Williams wrote: ". . . it was considered that children with wheezy bronchitis and asthma were from the same population with the same underlying disorder".5 Since that time, the concept of asthma has become an umbrella diagnosis covering a spectrum of childhood respiratory symptoms, the main ones being wheeze and, increasingly, cough. This has resulted in a uniform approach to treatment that has led to an improved quality of life for asthma sufferers. However, the concept of asthma as a homogeneous disease has impeded research into its aetiology. The Tucson study11 has clearly identified different patterns of wheezing in early childhood, with only 40% of children with symptoms in the first three years of life continuing to wheeze beyond the age of six. These children had normal lung function at birth and tended to have atopic features. Similarly, the Melbourne study adds weight to the increasing evidence that there may be several distinct phenotypes within the spectrum of childhood asthma, each having a distinct natural history. One difficulty in interpreting longitudinal data is the change in disease prevalence, environmental factors and treatment strategies that may have occurred over the period of the study. Data from the three studies referred to here3,5,8 may not be generalisable to children with asthma in the 21st century, but they do provide a basis for comparison.

In summary, there is a favourable outcome for most children with asthma as they grow towards the mid-adult years. The major determinant of outcome is the pattern and severity of childhood asthma, together with lung function. Episodic asthma appears to resolve, with normal lung function preserved, whereas the reverse is seen for those with persistent asthma in childhood. The reduced lung function observed in adults with long-standing persistent asthma is established in childhood and does not appear to decline more rapidly than the lung function of adults in the control group. Risk factors for wheeze continuing into adult life include early age of onset, female sex, atopy, eczema, pattern of asthma, low lung function and bronchial hyper-responsiveness. The Melbourne study reinforces the concept that, within the spectrum of paediatric asthma, several distinct phenotypes can be recognised.

1: Number of participants (%) showing symptoms of asthma at age 42 years, by classification at recruitment (ie, age 7 or 10 years)

2: Clinical expression of asthma at age 42 years, by classification at recruitment 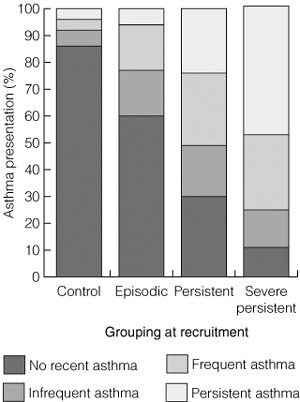 3: Mean lung function measures at each seven-year follow-up point, by classification at recruitment 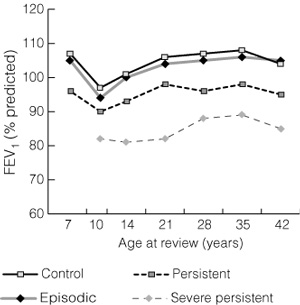