Aim: To report the preliminary findings of a pilot program to screen newborn babies for congenital bilateral permanent hearing loss.

Participants: All babies born at these hospitals after the introduction of hearing screening until 30 June 2001.

Methods: One or both of two automated screening devices were used: one measuring transient evoked otoacoustic emissions (TEOAE) and the other automated auditory brainstem responses (AABR). If a "pass" was not obtained in both ears, screening was repeated. All babies who did not obtain a pass in either ear at follow-up were referred for audiological assessment.

Conclusions: Despite our program meeting process quality indicators, our detection rate was low. Before extending the program to smaller hospitals, we need to validate our screening instruments and put in place a system to monitor false negative results.

Congenital bilateral permanent hearing loss has a major impact on speech and language development.1 Estimates of the prevalence of such hearing loss range from 0.53–1.50 per 1000 live births2-6 (Appendix 1). Studies have shown that children with hearing loss who receive early intervention have better language skills than those with later intervention.1,7 The critical age by which intervention should commence may be as early as six months.1 However, diagnosis is often delayed. In 1997, in Western Australia, the median age for fitting of hearing aids for congenital hearing loss was 25 months.8

We report the preliminary findings of a pilot program of newborn hearing screening to detect congenital bilateral permanent hearing loss at five maternity hospitals in Perth, Western Australia. The program commenced in 2000 and our report includes results in babies born until 30 June 2001.

In Western Australia, about 25 000 babies are delivered every year; about 45% of these deliveries occur in the five largest maternity hospitals in the Perth metropolitan area. Hearing screening was gradually introduced at these hospitals during 2000: King Edward Memorial Hospital for Women (February), St John of God Health Care Subiaco and Woodside Maternity Hospital (May), and Joondalup Health Campus and Osborne Park Hospital (August). King Edward Memorial Hospital has a Level 3 nursery and St John of God Health Care and Joondalup Health Campus have Level 2 nurseries. In June 2001, hearing screening for all babies was introduced at the Level 3 nursery at Princess Margaret Hospital for Children (Western Australia's tertiary paediatric centre). Thus, newborn hearing screening was available at all Level 2 and 3 nurseries in Western Australia. Screening was offered at King Edward Memorial Hospital seven days a week, and at the other hospitals five to six days a week.

The hearing screeners were trained to use the screening equipment. They came from a variety of backgrounds (including qualifications in childcare or a health-related field) and had previous experience in handling babies. They were given a complete list of births from the previous day(s) and obtained written consent to perform the screening test from the parents. They explained the test and its results to parents, performed the screen, and recorded the results. An audiologist was available for consultation.

All liveborn infants at the screening hospitals were eligible for screening, which was offered to well babies generally on the day after delivery. Babies admitted to a Level 2 or 3 nursery were screened when the baby was at least 34 weeks' gestation. If possible, the parents of babies who were discharged before screening were given an invitation by the visiting midwife to return for an outpatient screen.

We developed a combined data and consent form, and recorded for all babies (whether screened or not) delivery site, date and time of birth, and sex. If the baby was not screened, the reason for not screening was recorded. For screened babies, demographic information, birthweight, gestational age and screening details were collected.

We used a combined-technology screen to increase specificity and reduce costs. The well-baby screening flow diagram and a description of the two screening instruments used are given in Box 1. Babies with a significant family history of hearing loss who passed the hearing screen were referred for audiological assessment at age seven months.

After the hearing screen parents were given a results sheet which explained the results and reinforced the need for ongoing childhood hearing surveillance. The results of the screen were recorded in the baby's hospital records and personal health record.

Approval for the program was obtained from the ethics committees at King Edward Memorial and Princess Margaret hospitals.

Completed data were entered into a Filemaker database.11 We calculated 95% CIs for the prevalence of bilateral hearing loss using the Poisson distribution.12

Of the babies screened at Princess Margaret Hospital from the start of its newborn screening program in June 2001, only those transferred from a hospital where screening was available were included in the data analysis.

About 80% of all babies screened had measurement of transient evoked otoacoustic emissions (TEOAE) only, while about 16% also had automated auditory brainstem responses (AABR) measured (Box 1). Most of the 4% of babies screened using only AABR were in Level 2 or 3 nurseries.

Reasons for babies not being screened

Early discharge (309; 2.3%) was the main reason that babies were not screened (Box 2). By 2001, more women took up the offer of an outpatient screen for their infant, and the proportion who missed screening decreased to 1.8%. Of the 129 (1.0%) babies not screened because of transfer to another hospital, 69 were screened as part of a high-risk screening program in the Level 3 nursery at Princess Margaret Hospital. All babies in the high-risk program were screened by an audiologist before hospital discharge. (Information was available on the outcome for these 69 babies only. They are included in the calculation of prevalence of hearing loss in the cohort, but not in the evaluation of the screening process.)

Box 2 shows the results of the initial screening. The bilateral "pass" rate increased over time. A total of 351 babies failed the screen in one or both ears. In the first weeks of the program, an AABR instrument was not available, so babies were screened using only TEOAE, and follow-up was only offered to babies who failed the screen in both ears. Thus, 40 babies who failed the screen in one ear were not offered follow-up. Another 10 babies were referred directly for audiological assessment due to either repeated fail responses to hearing screening while in a Level 2 or 3 nursery, or a structural problem affecting the ears. Of the remaining 301 babies who were offered follow-up, 271 (90%) returned and 30 (10%) babies were lost to follow-up due to multiple missed appointments or parental refusal. When families did not attend the follow-up appointment, their child health nurse was notified and asked to encourage the family to arrange a repeat screen, or, failing this, to monitor the baby's hearing.

Of the nine babies with permanent bilateral hearing loss, six were fitted with hearing aids by the age of six months, and one was fitted with aids at 19 months because of parental delays. One baby who received long-term Level 3 nursery care is still in hospital and his condition has precluded fitting a hearing aid, and one baby has died.

During the first 17 months of this program, the prevalence of congenital bilateral hearing loss was 0.68 per 1000, with eight out of nine affected babies having a risk factor for hearing loss. A summary of other hearing screening programs is given in Box 3. However, the different definitions of hearing loss used make comparison between studies difficult.

Our program meets the recommendations of the Joint Committee on Infant Hearing9 for process quality indicators, with 96.2% screening uptake, 90% return for follow-up and 0.18% referral for audiological assessment. However, our study has revealed a number of weaknesses: (i) the confidence intervals for the prevalence of bilateral hearing loss were wide; (ii) our cohort is not representative of all Western Australian births; (iii) the screening instrument we used has not been well validated in the medical literature; and (iv) we had limited time for diagnosis of hearing loss in babies who passed the hearing screening ("false negatives").

Despite our large sample size, the 95% CIs for the prevalence of bilateral congenital hearing loss are wide (0.31–1.28). However, most other screening programs have equally wide CIs (Box 3). There is a strong case to continue screening, so that, with a larger sample, there will a more precise estimate of prevalence.

In our cohort of babies those requiring special care are over-represented, as screening is offered at all delivery sites with Level 2 or 3 nursery facilities. Since these babies are more likely to have hearing loss, the prevalence we calculated is likely be higher than in the State as a whole. There are few reports of screening programs covering the whole population of a defined geographical area.6,27,28

Our program has been successful in screening a high percentage of eligible babies, with a low referral rate. However, the prevalence of bilateral permanent hearing loss detected is low (0.68/1000). Several aspects of the program are being evaluated and data about permanent hearing loss in Western Australian children will be obtained before deciding whether to extend the program to other hospitals. 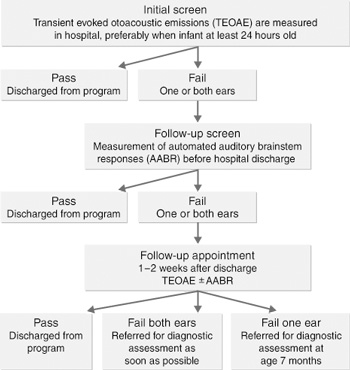 All well babies were screened using an Echocheck TEOAE hand-held screener (Otodynamics, Hatfield, UK), which involves placing a probe into the baby's outer ear. This test concentrates on the main speech frequency band range of 1.6–3.6 Hz. A "pass" response is based on detecting a non-linear TEOAE cross-correlated signal-to-noise ratio of at least 6 decibels (dB).

The detection of AABR is more specific, but the test takes more time and is more expensive than the TEOAE screen, requiring the placement of scalp electrodes. Until July 2000 the AABR instrument used was the Sabre system (SLE Ltd, South Croydon, UK). After July, the Algo 2e Color Newborn Hearing Screener (Natus Medical Inc, San Carlos, USA) was used. Auditory brainstem response is a modified electroencephalogram recording of brain activity in response to auditory stimuli presented in the form of brief clicks. By averaging techniques, the electrical potential can be detected and used to determine the hearing threshold. Both the Sabre and Algo 2e screening units use an automated detection of these responses and yield "pass"/"refer" criteria set at 35 dB normal hearing level scale.

Comments: Both the TEOAE and AABR screening instruments clearly display
a "pass" response, so no interpretation is required. The TEOAE screen has limited specificity when used in the first few days of life. It only measures outer hair-cell function in the cochlea. Babies with central hearing loss can have normal cochlear function and so will pass the TEOAE screen. As the group most at risk of central hearing loss are babies who have received Level 3 care, most babies who have had long-term neonatal intensive care are screened initially using the AABR screen.

2: Uptake and results of the initial hearing screen and reasons initial screening was not completed

3: Summary of the methods and results of published newborn hearing screening programs*

Appendix 2: Indicators associated with sensorineural and/or conductive hearing loss for use
in neonates when universal screening is not available*

The program is funded by the Department of Health in Western Australia, King Edward Memorial and Princess Margaret hospitals, and the Garnett-Passe and Rodney Williams Memorial Foundation. C Bower is funded by NHMRC Fellowship number 172303.

None identified. The Department of Health, Western Australia, and King Edward Memorial and Princess Margaret hospitals were involved in the planning of the pilot program. The funding bodies had no input into the analysis or interpretation of the data, the writing of the article or the decision to submit for publication.