Objective: To examine the demographic changes in the cohort of general practitioners servicing residential aged-care facilities (RACFs) from 1984 to 2000.

Design: Quantitative analysis of Medicare datasets from 1984 to 2000.

Participants and setting: All GPs who provided Medicare-claimed RACF services from 1984 to 2000.

Conclusion: Our results suggest an increasing reliance on older, male GPs in the supply of RACF services. Although the proportion of female RACF GPs has increased, average services by these GPs, who are generally younger, has declined. The personal and work preferences of female GPs may have implications for future RACF services supply as older, generally male, GPs retire.

Knowledge of the organisation and standards of care and morbidity of elderly people in the community and RACFs remains limited.1,6,7 Increased frailty may not necessarily result in increased GP visits. There is recent evidence of a decrease of 2.8% in Medicare non-referred attendances at RACFs between 1998 and 2000.8 It could be argued that high-care-dependent residents (who may exhibit phthisical deterioration, including dementia, and receive high levels of nursing care) are less likely than low-care-dependent residents (who are not provided with nursing support) to receive GP visits. In addition, GP interactions with RACFs may be dependent on individual RACF protocols and procedures. The decreased service provision by GPs may also be associated with RACF efforts at GP care substitution.8

There is a need to understand the link between general practice care and RACF quality of care and health outcomes. The RACGP's Standards for general practices require that practices make provision for RACF visits where medically indicated.9 Nonetheless, GPs generally are not involved in clinical and quality-of-care issues associated with RACF management.10,11 This article examines Medicare data since 1984 to determine what change there has been in the cohort of GPs servicing RACFs.

We used the Easytrieve data retrieval system12 to extract from the Medicare datasets from 1984 to 2000 all non-procedural nursing home services claimed by non-specialist practitioners. All the RACF non-referred attendance item numbers included in the Medicare Benefits Schedule (MBS) since February 1984 were included (Box 1). We retrieved 24 566 889 Medicare claim observations for analysis.

The SAS statistics system13 was used to derive data summaries of the number of RACF services claimed and number of GP claimants by age group and sex from 1984 to 2000. Of the 773 335 GP demographic observations, 18 351 were adjusted for year of birth where this had been incorrectly entered in the Medicare provider demography databases. In these cases, GP age was estimated based on year of basic qualification.

The non-parametric Cochran–Mantel–Haenszel statistics, which test the null hypothesis that there is no association between stratified variables,14 were used to test for any confounding effects of GP sex on RACF services by GP age group.

The increasing rate of RACF service provision by older GPs is independent of the declining rate among female GPs (P < 0.001 for age group, after controlling for sex).

The Medicare database represents the most comprehensive dataset of medical services in Australia. Although analysis of Medicare claim payment data does not address the nature of the services provided or the quality of clinical care, it is important in describing the current rate of GP RACF services and trends over time.

Our results suggest that there is a decreasing engagement of the GP workforce with RACFs. Younger GPs have declined considerably as a proportion of all RACF GPs, and, although female RACF GP numbers have increased, average servicing levels of both female GPs and GPs younger than 45 years are considerably reduced compared with older GPs. It would seem that RACFs have become increasingly reliant on an established cohort of older, male GPs.

The increasing proportion of female GPs in the workforce and the declining involvement of female GPs with RACFs has implications for the maintenance of RACF services over the longer term, particularly given the trend for residents to be frailer and have more complex care needs. Female GPs typically prefer practice-based consultations involving the clinical management of acute conditions and younger patients, and work fewer hours than male GPs.16,17 About 60% of the GP trainee workforce was female in 1999.15 The Australian Medical Workforce Advisory Committee has suggested that an expected rapid increase in female GP numbers is likely to have a major impact on supply of general practice services.18 While increased female GP participation is desirable on equity grounds, it is clear that the work preferences of female GPs will impact on supply of services as older, generally male, GPs reduce their professional commitment and eventually retire.

The current arrangements for general practice RACF services have been described as ineffective, lacking in outcome-oriented medical standards, and poorly remunerated.11 Further research is needed on models of RACF care that can underpin the provision of quality general practice and meet potential inadequacies in supply of RACF services. Important areas to explore are flexibility of funding of GP support of RACFs, and organisational structures that would support improved clinical and outcome standards and enable part-time and other alternative employment opportunities that are likely to be more attractive to women.19 It will also be important to ensure that postgraduate training programs include specific exposure to RACF residents and the range of clinical problems and other care issues they may have. 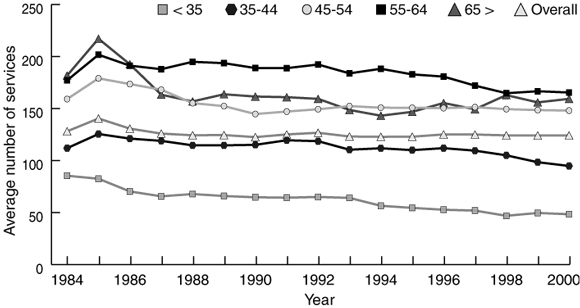