Torsion of the appendix 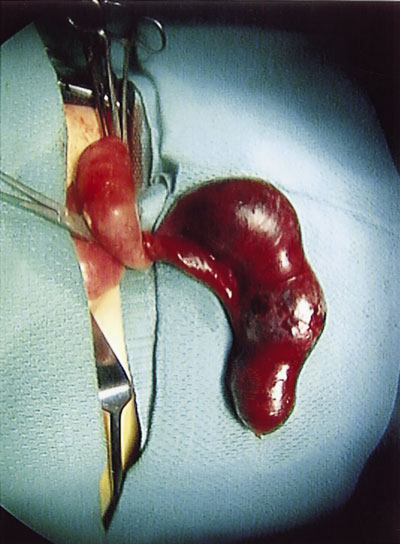 Torsion of the vermiform appendix was first reported by Payne1 in 1918 and remains something of a curiosity, with only 19 further cases reported, 12 in paediatric patients.2,3

Anatomical variations (eg, long mesoappendix), appendiceal tumours and strenuous physical exercise such as calisthenics were suggested to predispose to torsion.4,5

Our patient, a 44-year-old woman, suddenly developed severe abdominal pain while walking, which was unrelieved by narcotic analgesics. Abdominal palpation revealed acute tenderness suprapubically and in the right iliac fossa.

Surgical exploration via the standard McBurney incision revealed a dilated gangrenous appendix twisted 360 degrees anticlockwise at its base, as shown in the operative photograph.

Histopathological examination of the appendix revealed a cystadenoma close to its distal end.

The patient made an uncomplicated recovery after appendicectomy.

"On Monday, March 13, 1916, while travelling in a train, [the patient] was seized with sudden pain in the epigastrium after lunch. She vomited several times, but the pain continued and was of a colicky nature. At midnight the pain suddenly shifted to the right iliac fossa and became continuous.

The following day a doctor was called in; he ordered enemata, and three were given, with very copious results. On the 15th I saw the patient and operated the same evening.

On opening the abdomen through the right rectus incision, the appendix was found pointing downwards and slightly outwards in the right iliac fossa. It was quite free except for a slight recent adhesion from the extreme tip to the iliac fossa. On examination it was found to be twisted, and it took three complete turns to unravel it . . . The appendix distal to the narrowing caused by the twisting was gangrenous, and the meso-appendix dark and swollen. The appendix was removed, and the abdomen drained through the original incision. The temperature and pulse became normal on the third day, and the patient made an uneventful recovery.

Remarks. — The appendix was 21/2 in. long and contained faecal material. It seems most probable that the previous attacks were due to a 'constipated appendix,' and that the torsion resulted from irregular peristaltic movements on the part of the appendix itself."