Neuromuscular paralysis and death up to four days after removal of ticks is well documented and apparently unique to Australian tick envenomation.1-5 Generally, obvious symptoms and signs are present at the time of tick removal. In contrast, onset of local neurotoxicity many hours after tick removal has not, to my knowledge, been reported previously in the medical literature.

A 48-year-old man with tick infestation was referred to our hospital emergency department by his general practitioner.

The patient complained of lumps on his scalp (present over the previous few weeks), lethargy, myalgia, unsteadiness on his feet and numb lips. He stated that he spent a lot of time walking in bushland around his home. His friend's dog had recently died from tick paralysis.

Multiple engorged ticks were evident on the man's face, scalp, neck, back and limbs. An engorged tick was removed from his left cheek, but there were no intra-aural or peri-aural ticks. He had multiple associated urticarial lesions and generalised lymphadenopathy. His pulse was 114 beats/minute, blood pressure 148/100 mmHg and he had a temperature of 37.5°C. Neurological examination revealed no cranial-nerve deficits. In particular, there were no motor or sensory deficits of the face. The numbness of the lips, which the patient had earlier described, had now resolved. His gait, muscle power, tone and reflexes were normal. Light touch and pinprick sensations in his limbs were also normal.

In view of the magnitude of the infestation, the patient was asked to return the following morning for reassessment. A review 20 hours after tick removal revealed left facial-nerve palsy. In addition to the lower motor neurone motor deficit, the patient complained of altered sensation over his left cheek and upper lip, and subjective loss of light touch and pinprick sensation from the left cheek to the upper lip were demonstrated.

As tick venom has not been shown to affect sensory-nerve conduction, the most likely explanation is that this apparent dysaesthesia is akin to that seen with idiopathic Bell's palsy, in which patients commonly complain of altered sensation in what is purely a disorder of the motor neurone. The phenomenon appears to relate to altered proprioception. No other neurological abnormality could be detected and there were no residual ticks found after a thorough search.

The facial paralysis took seven days to completely resolve. After two weeks the patient felt well and had resumed his previous activities. He was advised to ask a friend or relative to check him thoroughly for ticks after spending any time in the bush.

Of the 19 identified species of Australian tick in the Ixodes genus,6 only three have been shown to secrete paralytic toxins.7 With the exception of one case of I. cornuatus envenomation,8 all human cases of paralysis in which the tick was identified were due to I. holocyclus. The structure of the protein neurotoxin, also known as holocyclotoxin, has not been elucidated. It is secreted from the massive salivary glands of engorged female ticks late in the feeding cycle. Like botulinum toxin, holocyclotoxin is thought to act presynaptically at the neuromuscular junction to inhibit acetylcholine release.9

In Australia there have been 20 reported deaths from tick envenomation, all before 1945. Ticks have caused more deaths than any other Australian arachnid, including the funnelweb spider (Atrax robustus) (13 attributable deaths) and the redback spider (Latrodectus hasselti) (14 deaths).10 Tick paralysis has been frequently misdiagnosed, and this envenomation syndrome must be included in the differential diagnoses of any patient presenting with an ascending symmetrical paralysis.

Generalised paralysis most commonly affects children under three years, but there are three documented fatalities in Australian adults due to tick envenomation.10 Late discovery of ticks hidden on the scalp or in bodily creases and orifices is a recurring, and often lethal, theme.1,11 The diagnosis may not be immediately apparent, and any child with ataxia or progressive weakness should be carefully examined for ticks.

Cases of isolated local paralysis, usually facial, are less commonly reported.1,4,12-14 Usually, the palsy is present at the time of tick discovery, and, in the case of facial-nerve palsy, the tick is found most often behind the ear or within the external auditory meatus. Cases of isolated facial palsy have lasted three days to three weeks.4,12,13

I am aware of one other case of delayed-onset facial-nerve paralysis in a child secondary to tick envenomation. This resolved spontaneously within a few days (Dr Bill Whyndham, Registrar, Emergency Department, Gosford Hospital, personal communication). A case of median-nerve palsy caused by local (axillary) I. holocyclus envenomation has also been described (Dr Bill Whyndham, personal communication, from a presentation to the Australasian College for Emergency Medicine Winter Symposium, Lorne, VIC, July 1999).

Local paralysis is a well documented, albeit unusual, complication of tick envenomation. The case described here emphasises the potential for late onset of paralysis, even many hours to days after removal of the tick(s), and the need to closely follow up any patients with symptoms suggesting tick envenomation. Admission for several days' observation of children with any signs of neurotoxicity should be considered. 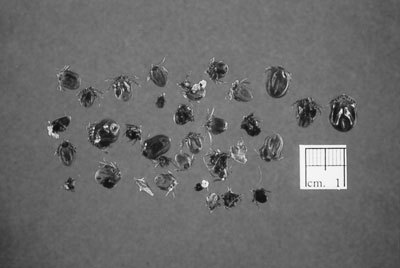 Ticks removed from the patient.