How many patients with coronary heart disease are not achieving their risk-factor targets? Experience in Victoria 1996–1998 versus 1999–2000

Objectives: To determine the proportion of patients with established coronary heart disease (CHD) in two Australian studies (VIC-I in 1996–1998, and VIC-II in 1999–2000) who achieved their risk-factor targets as recommended by the National Heart Foundation of Australia, and to compare this proportion with those in studies from the United Kingdom (ASPIRE), Europe (EUROASPIRE I and II) and the United States (L-TAP).

Participants: 460 patients (112 in VIC-I, 348 in VIC-II) who completed follow-up in the control groups of two randomised controlled trials of a coaching intervention in patients with established CHD.

Main outcome measures: The treatment gap (100%, minus the percentage of patients achieving the target level for a particular modifiable risk factor) at six months after hospitalisation.

Conclusions: A substantial treatment gap exists in Victorian patients with established CHD. The treatment gap compares well with international surveys and, at least in the lipid area, is diminishing.

The difference between treatment recommended on the basis of clinical trials and that which actually occurs in the community has often been referred to as the "treatment gap".1 Evidence from international surveys indicates that only a minority of patients with coronary heart disease (CHD) achieve the target levels for their particular modifiable risk factors or even receive treatment.2-5 There are no published data available for Australia.

In this observational study we measured the treatment gap in patients with CHD who completed follow-up in the control groups of two randomised controlled trials of a risk-factor intervention called the "Coach Program", conducted in 1996–1998 and 1999–2000, respectively.6-7 Here, we compare the treatment gap in Victoria within these two time periods and contrast this gap with that in the United Kingdom,2 Europe3-4 and the United States.5

The study protocols were approved by the human research ethics committee of each centre.

Data in VIC-II were collected from May 1999 to April 2000 by four nurses and two dietitians (one health professional per hospital). VIC-II patients were discharged with a one-page chart of risk-factor targets for the secondary prevention of CHD, which was attached to their hospital discharge summary. This discharge summary and chart were given to the patient's usual medical carer by the patient after discharge. Patients were contacted only once after discharge, at 24 weeks to arrange a follow-up assessment within the next two weeks. The following data were obtained at the six-month interview: fasting serum lipid level profile, fasting glucose level; blood pressure and body weight measurement; dietary intake determined by means of a validated food-frequency questionnaire,8 self-reported smoking behaviour, alcohol intake, physical activity, performance of cardiac rehabilitation, and use of lipid-lowering medication.

Venous blood was drawn for the biochemical measurements. Low-density lipoprotein cholesterol (LDL-C) concentration was calculated by the Friedewald equation, except when the triglyceride concentration exceeded 4.5 mmol/L.9 Analyses were performed by one central commercial laboratory in VIC-I and within each hospital's own pathology laboratory in VIC-II. Blood pressure was measured in a sitting position. Two measurements were taken, and the lower systolic and diastolic measurements were used. Weight was measured on electronic scales in light indoor clothes without shoes. The height used for calculation of body mass index (BMI) was recorded from the patient's medical history.

The treatment gap, expressed as a percentage, is 100%, minus the percentage of patients achieving the target level for a particular modifiable risk factor.

The 95% confidence intervals for the lipid results were calculated with Stata.15 The number of patients achieving the lipid targets in VIC-I and VIC-II were compared with χ2 tests.

Box 2 compares the proportion of patients achieving lipid targets in the two Victorian studies, and the four overseas studies.2-5

In VIC-I and VIC-II the same median doses of statins were used to achieve all the lipid thresholds shown in Box 2 (a) and (c). There was no evidence that the statin doses were titrated up to achieve target lipid levels.

The data from the two Victorian surveys indicate that there has been a marked reduction in the treatment gap for lipid targets between 1996–1998 and 1999–2000. This may be attributable to better uptake of lipid-lowering drug therapy based on evidence from trials, a change in Pharmaceutical Benefits Scheme prescribing criteria for lipid-lowering drugs, and extensive sponsored medical education from the pharmaceutical industry. Also, the usual medical carer for each patient in VIC-II was provided with a one-page chart of goals for secondary prevention of CHD. Providing this chart was not usual practice and may have had an enhancing effect on usual care.

We have shown that many more patients in VIC-II achieved the NHF total cholesterol level targets of < 4.0 mmol/L10 (current target levels) or < 4.5 mmol/L11 (target levels at the time of the study) compared with VIC-I. We found that the use of lipid-lowering medication increased from 59.8% in VIC-I to 86.8% in VIC-II, although median doses of statins remained the same. Further, Box 2 (b) indicates that few patients achieved the recommended targets without the use of drugs and there was no improvement between VIC-I and VIC-II.

We therefore conclude that the reduction in the treatment gap between VIC-I and VIC-II has been the result of an increase in the number of patients prescribed lipid-lowering drugs, rather than an increased dose of these drugs or better nutritional counselling provided by usual medical care. Titration of statins and better advice on nutrition appear to be the next important focus for the achievement of lipid targets.

Although the current treatment gap in Victoria for lipid targets compares well with published international data, the gaps are not acceptable and will undoubtedly result in an excess number of cardiovascular deaths, infarcts and patients needing revascularisation.

We have concentrated on lipid data in this report. However, the results for VIC-II for the other modifiable risk factors show that these also need more attention. Large treatment gaps exist for risk factors such as high blood pressure (≥ 140/90 mmHg), diabetes (FBG level, ≥ 7.0 mmol/L), overweight (BMI, 25 to < 30 kg/m2) and obesity (BMI ≥ 30 kg/m2), smoking, physical activity, dietary intake of saturated fat (> 8% of total energy intake) and alcohol intake.

One way of helping patients achieve their risk-factor targets for secondary prevention is the Coach Program, an aggressive training program for patients with CHD whereby a health professional coach trains patients to "take ownership" of their risk-factor levels and to "drive" the process of achieving and maintaining the target levels, while working in association with their doctors. The program has been tested,6-7 and the results have shown that coaching has had a major impact on these risk factors and may be the bridge across the treatment gap.

1: Participation rates, by clinical characteristics and place of residence 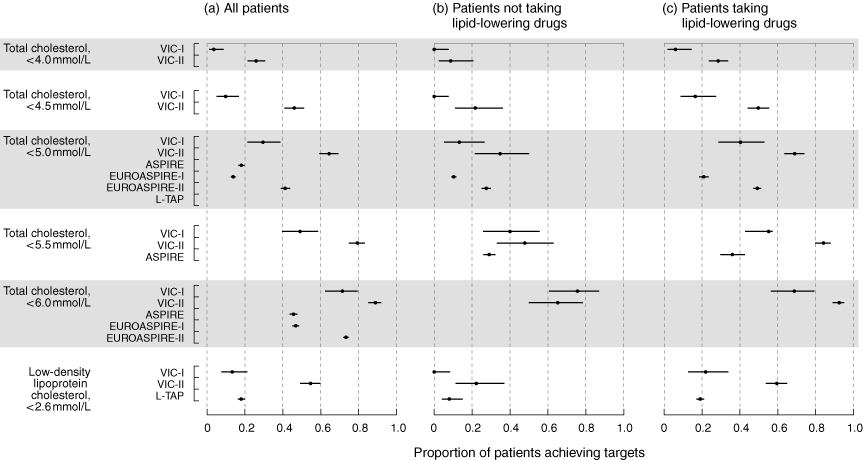 VIC-I6 and VIC II7 are the two Victorian studies under consideration. ASPIRE (UK),2 EUROASPIRE I and II (European)3-4 and L-TAP (US)5 are studies used for international comparison.

3: Use of lipid-lowering medication (number and % of patients): international comparison

We gratefully acknowledge the invaluable assistance of Dr John Sanatamaria in creating the graphs for presenting our lipid data with international comparisons. This study was supported by an unconditional project grant from Merck Sharp and Dohme (Australia) Pty Limited and by a research program grant awarded by VicHealth (Victorian Health Promotion Foundation). The study sponsors had no part in the study design, data collection, data analysis, interpretation or in the writing of the manuscript. The dietary survey (VIC-II) was supported by a project grant from the Research and Grants Unit, St Vincent's Hospital Melbourne. This study was presented at the 49th Annual Scientific Meeting of the Cardiac Society of Australia and New Zealand, Auckland, New Zealand, 5–8 August 2001.