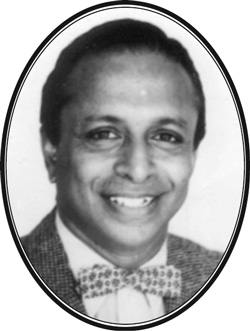 John St George was born in Malaya on 2 December 1924. His family returned to Ceylon in 1925, where he studied at St Patrick's College in Jaffna. In 1950, he graduated with Honours in medicine from the University of Ceylon in Colombo.

While in Nigeria, John initiated the obstetric "flying squad" to enable women in remote areas to receive emergency medical treatment, and helped to invent a two-wheel collapsible trolley for bush track roads to help reduce maternal mortality. In 1974, the London School of Hygiene and Tropical Medicine awarded him the Langley Memorial Prize for this work.

In 1975, John migrated to Australia and set up practice at Burwood and Lakemba, in Sydney, working as a gynaecologist at the Western Suburbs Hospital until 1993. He retired in 1998.

John was passionately interested in sports and the Church. From his early years at St Patrick's College, where he was the captain of both the athletics and soccer teams, he took to heart the College's motto "fide et labore" (faith and work). He based his entire life on this simple yet profound philosophy, which saw him succeed in his career and adapt to many different cultures and countries with ease.

John died peacefully (of hypostatic pneumonia) at Concord Hospital on 9 December 2001, at the age of 77.