Plastic bread clips are a rare but potentially avoidable cause of gastrointestinal obstruction or perforation which can be fatal.

Case 1: A 79-year-old woman presented with peritonitis thought to be the result of a perforated viscus. Her condition was too poor for immediate operative intervention, and despite supportive treatment she died the same day. At autopsy, ileal perforation was identified related to a firmly adherent plastic bread tag (Figure). Two adjacent foci of congestion and mucosal distortion 24 cm proximally suggested a prior clip attachment site. She had suffered from dementia and her meals were made by her husband, who was blind. 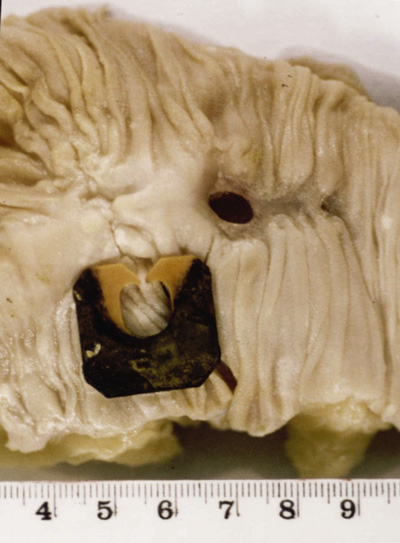 Bread tag from the patient in Case 1, detached to reveal the site of ileal perforation. Scale is in centimetres.

Case 2: An edentulous 82-year-old woman presented with a one-day history of abdominal pain. A laparotomy showed ileal perforation related to a bread tag attached to the mucosa. Postoperatively, she developed bronchopneumonia which proved fatal. Three months before presentation, she had suffered a less severe episode of abdominal pain which had resolved on conservative treatment from her general practitioner.

In Australia most bread bags are sealed by hard plastic clips. These are cheap and convenient, enabling the bag to be resealed after use. However, some countries have withdrawn their use because of gastrointestinal problems after ingestion.1,2

Patients swallowing clips are typically elderly and edentulous. The clips tend to snag on the small bowel mucosa, which may obstruct, erode or perforate. Impaction in the oesophagus, stomach or colon has also been reported.3 The tags are generally not seen on plain x-ray2 and patients are often unaware that they have swallowed them. Because of the high risk of complications, early endoscopic removal is advocated.4 With an ageing population, the proportion of edentulous people is likely to rise, increasing the risk of foreign-body ingestion.

Alternative plastic bag sealers are available, although some also present health hazards. For example, ileal perforation has been reported after swallowing a freezer bag tie containing a wire.5