Objective: To quantify the barriers to practising as a rural consultant physician.

Participants: All 981 practising consultant physicians in Victoria, Australia, who were Fellows of the Royal Australasian College of Physicians in 1999; 52 (100%) of rural physicians and 634 (68.2%) of metropolitan physicians completed the survey.

Conclusion: The major barriers to rural practice identified by physicians lie outside the health sector, and particularly concern a perceived need for wider opportunities in children's education and spouse employment.

Most of the research published about the maldistribution of the medical workforce in Australia has concentrated on shortages in rural general practice.1,2 Government medical workforce policies have generally focused on:

A qualitative review of issues surrounding rural specialist practice has been undertaken,4 but the importance of the barriers to rural consultant physician practice has not been quantified.

Our study was undertaken in March 2000 under the auspices of the Royal Australasian College of Physicians (RACP). Postal questionnaires were sent to all Victorian Fellows of the Adult Medicine Division of the College in 1999. This group comprised 1027 registered consultant physicians, of whom 18 were retired or no longer in practice and 28 were overseas. Physicians' replies were sent by prepaid mail to the RACP office. Non-respondents were sent a second questionnaire and then followed up with one or more telephone calls until it was clear that a response was unlikely.

Rural practice was defined by the postcode of the primary residence and the primary practice and according to the Rural, Remote and Metropolitan Areas (RRMA) classification.5 Five physicians had rural postcodes for registration but lived and worked in metropolitan Victoria.

The questionnaire included demographic details, work profile (eg, type of practice, private and public mix of practice — based upon the biannual physician survey conducted by the RACP) and planned practice location changes.

Questions regarding barriers to rural practice were developed by us using both closed questions (ie, "yes" or "no" responses to the seven domains in Box 4: "Which of the following do you perceive as barriers to staying as or becoming a rural physician") and open questions (requests for a list of procedures they preferred not to perform and for physicians to give any other reasons for not becoming or not remaining a rural physician). Closed questions were asked about access to locums.

Data were entered into an Excel spreadsheet and then imported into the Statistical Package for the Social Sciences (SPSS) for analysis.6 All tests are two-tailed. Discrete variables were compared using the χ2 test and continuous variables using Student's t-test or Mann–Whitney U test. For the logistic regression, we used a forward conditional approach and then repeated it with a direct entry approach (threshold for entry, P = 0.05; for exit, P = 0.10; 20 iterations). No differences were found and direct entry results are shown. Age was divided into tertiles for the logistic regression.

Box 2 shows the characteristics of respondents.

The major obstacles to rural practice for both metropolitan and rural physicians were social (spouse's occupation [65.7%], children's schooling [72.2%] and other issues related to children [66.7%]). A substantial proportion were concerned about problems getting back to metropolitan practice (45.7%). Unfamiliar procedures (eg, ventilators, pacing wires, endoscopy, intensive care, coronary care and emergency management) were a concern for many (25.2%), as well as housing and depreciation in the value of housing (21.6% and 21.8%, respectively). Other barriers reported included loss of wider family support, ageing parents, access to religious and cultural venues, access to subspecialty facilities, academic isolation and lack of facilities, and long after-hours cover. The frequencies of the barriers were similar within each of the major specialties.

Physician characteristics and the major barriers to rural practice

Box 4 shows the relationship using logistic regression between each of the key physician characteristics and the seven major barriers to rural practice for the metropolitan physicians.

This is the first major survey quantifying barriers to consultant physician practice in rural Australia. Our study has exposed some local myths. For example:

Several respondents emphasised the contribution made by services visiting from the city, but we have shown clearly that this is relatively trivial. Furthermore, such services do not contribute to after-hours cover (commented upon by some respondents as a barrier to becoming a rural physician). Indeed, another study has shown that between 13.3% and 49.1% of rural patients (depending on remoteness of their residential area) travel to metropolitan areas for physician consultations,5 reflecting the limited capacity of both resident and visiting consultant physician services in many parts of rural Australia. There were no reported concerns regarding competition with visiting metropolitan physicians, although difficulties can occur in accessing health records during acute episodes in patients cared for by city-based services.

Trainees and exposure to rural practice

Rural consultant physicians were more likely to have interns. Access to resident staff was similar in rural and metropolitan areas, but until recently residents in rural areas were almost invariably basic trainees. The importance of placing advanced trainees in rural practice has been demonstrated previously — lack of exposure to rural practice during advanced training was associated with all physicians who were undecided about their preferred place of practice ending up in metropolitan practice, as did several of those intending to become rural practitioners.7

The ethics of attracting overseas-trained physicians to rural positions is debatable,8,9 but our data suggest that there may be additional risks. Non-Australian-born graduates expressed significant concern about not being able to get back to metropolitan practice, which might mean a greater likelihood of overseas-trained physicians moving to the city from rural areas once this is possible.

Attitudes of rural- and city-born physicians

Physicians born in rural areas and now practising in the city are less likely to view schooling as a barrier to rural practice. This suggests that those born in metropolitan areas have an exaggerated negative view of schools in provincial centres. While those in rural and remote settings are less likely to go to university,10 many of the schools in towns able to support consultant physician practice perform well educationally. The negative metropolitan view of rural schools parallels the negative view of rural health services and practice, which appears to be instilled at a young age. In a recent study among first-year medical students, those born in metropolitan areas were less likely than rural-born students to view rural practice positively.11 A key feature was a difference in the source of metropolitan and rural students' information — the media and personal exposure, respectively. This suggests that proactive approaches to media reporting, and rebutting unbalanced reporting, may be needed, along with, of course, genuine attempts to deal with the cause of any negative stories (eg, schools with difficulties in retaining or attracting suitably qualified teachers).

The major importance of education and other family issues in choice of practice location is similar to that found among general practitioners.2 Clearly, female participation is a major issue for the whole medical profession,12 but the absence of any female consultant physician in rural Victoria is a measure of the extent of the need for urgent action in rural practice. Family and professional issues have been identified as an issue for younger male physicians,13,14 and without intervention the ability to maintain the rural consultant physician workforce is likely to become increasingly difficult.

This was a common theme, and, for some, a reason for departure from rural practice. Coping with bureaucracy has also been found to be a reason for leaving rural practice among general practitioners.15 It is unclear whether such conflicts were in response to the greater difficulties experienced in rural hospitals during the economic limitations imposed in Victoria in the 1990s.16 An alternative explanation is that the impacts of conflicts are amplified in rural areas, where people have multiple roles and "strong ties", and where mutual avoidance can be difficult.17 In such a setting, conflicts have more severe and wide-ranging implications.

While performing procedures is attractive to many rural GPs,15 we found that this may be a barrier to practice as a rural consultant physician, particularly among older physicians. This finding is significant in that there appear to be older physicians whose children are grown up (and perhaps have left home) who may be willing to move to rural practice if the problem of unfamiliar procedures can be overcome. Increasing the number of advanced trainees should help, as well as courses which upskill (or reskill) older consultant physicians.

Through its Rural Workforce and Training Program, the RACP already undertakes a number of initiatives in support of Fellows and trainees in regional and rural Australia. Funding assistance has been received from the Commonwealth Department of Health and Ageing and various State government health departments to implement some of these activities (Box 5).

The major barriers to rural consultant physician practice are social and outside the health sector. However, access to additional training, making available and publicising widely known mechanisms for re-entry into metropolitan practice, such as linkage of rural positions with metropolitan clinical activities, and the growth in rural academic facilities are all likely to be helpful.

1: Location of rural physicians in Victoria in 1999 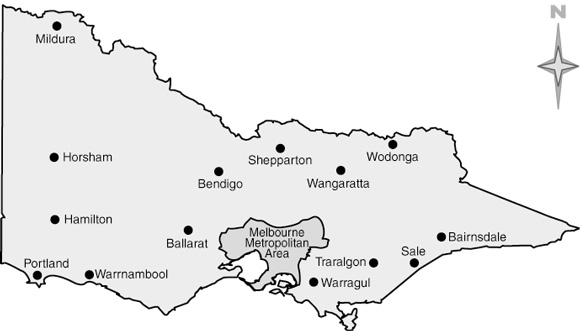 2: Characteristics of rural and metropolitan physicians

5: Rural initiatives of the Royal Australasian College of Physicians