A diving fatality due to oxygen toxicity during a

A diving fatality due to oxygen toxicity during a "technical" dive

An experienced diver drowned after a generalised seizure caused by oxygen toxicity during a 19-minute "technical" dive to a depth of 47 m. He had used a 50% oxygen/nitrogen gas mixture inappropriately during the dive. This case attests the risk of oxygen toxicity from oxygen-enriched air during deep dives, the shortcomings of the diver's equipment, and the need to examine, with knowledge of diving physiology and practice, both the body and equipment. (MJA 1996; 165: 262-263)

Scuba diving carries the risks of decompression illness and nitrogen narcosis; these risks increase the deeper the dive. Therefore, recreational scuba divers have been encouraged to avoid depths over 40 m. 1 In the past five years, some recreational divers have used highly specialised equipment and techniques to enable diving to greater depths (known as "technical" diving). These techniques include the use of surface supply and rebreather diving apparatuses and gas mixtures with a lower nitrogen concentration than compressed air to reduce the absorbed nitrogen load, allowing a longer bottom time with less decompression.

Another technical diving technique uses oxygen-enriched gas mixtures during decompression to accelerate shedding of absorbed nitrogen from the body ("enriched- air", or "nitrox", diving). Unfortunately, higher concentrations of oxygen may have a toxic effect on the brain, causing generalised convulsions which may lead to drowning. The extent of the toxic effect depends on duration of exposure and is increased by exertion and immersion in water. An oxygen tension limit of 161 kPa (1.6 atm) is often adopted in practical diving for exposures of less than 30 min (National Oceanic and Atmospheric Administration guidelines). 2,3,4 However, oxygen toxicity can occur at tensions as low as 121 kPa (1.2 atm). 2 The "safe" level is currently under review and is clearly dependent on duration of exposure.

The dangers of "technical" diving have been shown in a report of eight fatalities during technical dives in the United States in 1992. 4 We report the death of an experienced diver in Australia during a technical dive using an oxygen-enriched gas mixture. This case attests the risk of oxygen toxicity from oxygen-enriched air during deep dives, the shortcomings of the equipment used and the importance of an integrated approach to examination of the body and equipment by those experienced in diving practice and physiology.

Clinical record A 47-year-old experienced underwater cave diver, with no significant medical history, was diving with two tanks -- one containing compressed air, the other a 50% mixture of oxygen and nitrogen (nitrox). Towards the end of the 47-m, 19-min dive, he was seen floating head down, unresponsive, with his mouthpiece out of his mouth and "his fins [flippers] moving as if he was shivering" (as reported by another diver to the Coroner). The body was carried up to 15 m depth and then allowed to ascend freely as the other divers decompressed. Cardiopulmonary resuscitation was attempted, but abandoned after 43 minutes as there was no response. Autopsy findings Erect postmortem x-rays and autopsy of the body performed 24 hours after death revealed large amounts of gas in the venous system of the trunk and limbs and in both sides of the heart (Figure 1). The heart weighed 380 g and was normal, apart from foamy blood and gas in all chambers. Analysis of gas from the right ventricle showed O 2 (20.6% by volume), and N 2 (75.9%). There was bruising of the tongue and petechiae on the lungs and heart. The brain (1740 g) showed mild cerebral oedema and a microscopic perivascular haemorrhage in the floor of the fourth ventricle. 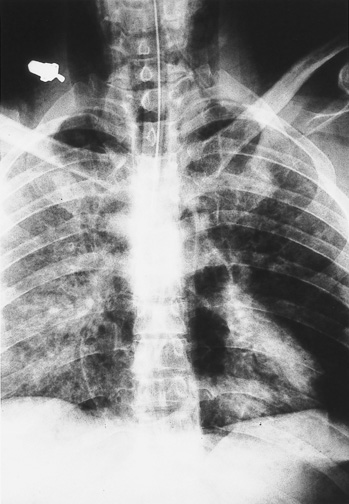 Figure 1: Postmortem erect chest x-ray, showing gas in both sides of the chest and in the neck veins (a combination of postmortem decompression, perimortem barotrauma and, possibly, decomposition).

Examination of diving equipment Examination of the subject's diving equipment (Figure 2) re-vealed that he had been breathing the 50% oxygen/nitrogen mixture for most of the dive. Each tank had a separate first stage connected in an unusual fashion by a two-way switch, which the diver had had made by a local engineering shop. This allowed the diver to switch from one tank to another rapidly. This switch supplied a single second-stage mouthpiece. The two tanks were different colours; the circuit from the black (compressed-air) tank was marked with yellow tape, while the circuit from the yellow (nitrox) tank was unmarked. 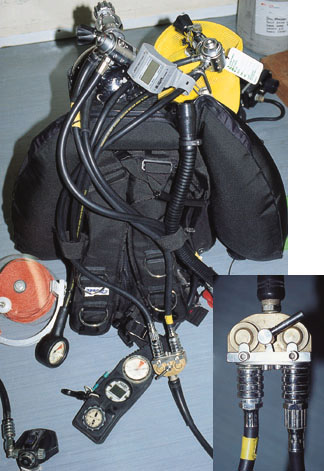 The regulator had a small tear and a bite mark in the mouthpiece. The diver wore a facemask and separate mouthpiece rather than a full facemask, which covers eyes, nose and mouth.

Discussion The cause of death, as determined by the Coroner, was drowning after oxygen toxicity. 5 The "shivering" movements and the biting of the tongue and mouthpiece suggested fitting. Using a 50% oxygen/nitrogen mixture at 47 m depth, the diver had been exposed to a partial pressure of oxygen of 291 kPa (2.9 atm), possibly for as long as 19 min. During diving, this gas mixture should be used only at depths less than 14-18 m (depending on the duration of exposure).

Cerebral gas embolism and decompression illness were unlikely causes of death, as the subject was unresponsive before ascent. The gas observed at autopsy probably resulted from a combination of postmortem decompression (release of tissue nitrogen), perimortem barotrauma and, possibly, a degree of decomposition. 6

This technical diving fatality and those reported in the United States in 1992 4 were in experienced divers, who should have understood the dangers. The standard of equipment and of diving practice during technical dives should be that of a commercial operator, with planning of the dive to stay below an appropriate oxygen pressure for the duration of the dive (e.g., below 161 kPa [1.6 atm] for a 19-min dive), 2 use of a full facemask, proper analysis of gas mixtures and access to surface decompression facilities after long deep dives. Use of home-made equipment is not appropriate.

During the inquest the New South Wales State Coroner declined to recommend legislation to regulate recreational technical diving, preferring that it remain subject to a voluntary code of conduct. 5