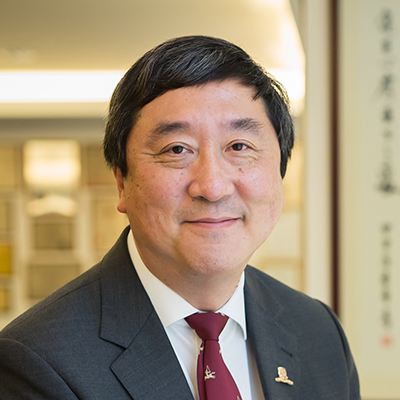 Professor Joseph J.Y. Sung is Mok Hing Yiu Professor of Medicine and President of the Chinese University of Hong Kong. He received his MB BS degree from The University of Hong Kong in 1983, and was conferred a PhD in biomedical sciences by the University of Calgary in 1992, and his MD by CUHK in 1997. Professor Sung holds fellowships from the Royal Colleges of Physicians of Edinburgh, Glasgow, London, Thailand and from the American College of Gastroenterology, the Royal Australian College of Physicians, the American Gastroenterological Association, the Hong Kong College of Physicians and the Hong Kong Academy of Medicine. He is an Academician of the Chinese Academy of Engineering of the People's Republic of China.

Professor Sung joined the Prince of Wales Hospital, CUHK’s teaching hospital, as a Medical Officer in 1985. He later joined the Department of Medicine of CUHK as Lecturer (1992), and was promoted to Professor of Medicine and Therapeutics in 1998. He was the Chairman of the Department of Medicine and Therapeutics (1999-2010), Associate Dean (Clinical) of the Faculty of Medicine (2002-04) and Associate Dean (General Affairs) (2004-09), and Head of Shaw College during 2008-10. Professor Sung was appointed Mok Hing Yiu Professor of Medicine in 2007 in recognition of his significant contributions to the prevention and early diagnosis of gastroenterology cancers.

Professor Sung’s key interest is in colorectal cancer; the microbiome and gastro-intestinal diseases, and gastro-intestinal bleeding. He and his team proved the relationship between H. pylori and peptic ulcer diseases. They were first in demonstrating that a course of antibiotics lasting a week can cure H. pylori infection and successfully treat peptic ulcers and minimize their relapse. They also pioneered the use of endoscopic treatment for ulcer bleeding to reduce the need for operative surgery. These research results have a major impact on and have changed the practice of gastroenterology worldwide.

Professor Sung has edited or authored more than 25 books and published over 790 full scientific articles in leading journals, including many in The New England Journal of Medicine and the Lancet, both top-notch journals in the field of clinical medicine.