Objective: To examine associations between area‐level socio‐economic factors and the incidence of severe acute respiratory syndrome coronavirus 2 (SARS‐CoV‐2) infections in Victoria during 2020.

Conclusions: Socio‐economic factors may have contributed to the non‐homogeneous incidence of SARS‐CoV‐2 infections across Victoria during 2020.

The known: Health, income, and education differences are associated with variations in the local incidence of SARS‐CoV‐2 infections in the United States, but their impact in Australia is less explored.

The implications: The disparate local incidence of SARS‐CoV‐2 infections in Victoria during 2020 suggest that socio‐economic and other factors should be considered by public health policy for mitigating the impact of the pandemic.

A total of 56 565 infections with the severe acute respiratory syndrome coronavirus 2 (SARS‐CoV‐2) were recorded in Australia during 25 January 2020 – 3 September 2021.1 Strategies for reducing attack rates and slowing viral spread during influenza pandemics — isolating infected people, closing schools and workplaces, working from home, restricting domestic and international travel, compulsory wearing of masks, vaccination2 — have also been employed in Australia during the coronavirus disease 2019 (COVID‐19) pandemic.

Initial efforts to suppress the spread of SARS‐CoV‐2 in Victoria were successful. The relatively small first wave (25 January to late 9 April 2020) was dominated by infections acquired overseas (59.5% of cases).3 The second wave, which commenced in May 2020, was characterised by locally acquired infections (91% of cases); genomic sequencing indicated that the two transmission networks during this wave originated with infected people in hotel quarantine.3 To reduce community transmission, the Victorian government introduced compulsory mask‐wearing, curfews, travel restrictions, closure of non‐essential businesses, and limits on the permitted number of household visitors.

We analysed Department of Health and Human Services (Victoria) (DHHS) data published on The Age newspaper website on 6 August 2020,5 updated with DHHS data on 13 August 2020. The aggregate data on the DHHS website (https://www.coronavirus.vic.gov.au/victorian‐coronavirus‐covid‐19‐data) include cases from outbreaks we did not include in our analysis. We aggregated data by postcode for confirmed SARS‐CoV‐2 infections during 1 March – 13 August 2020. We obtained socio‐economic data by postcode for 2014–19 from the Australian Bureau of Statistics (ABS) website: basic demographic, education, and ethnic background data, economic and employment‐related factors, housing‐related factors, and social disadvantage decile (Socio‐Economic Indexes for Areas [SEIFA] Index of Relative Social Disadvantage [IRSD]).6

We estimated the proportion of employees without paid leave benefits for a postcode by multiplying the number of people in each employment sector living in the postcode6 by the national proportion of employees in that sector without paid leave benefits.7 We defined working age as 15–64 years of age; an unemployed person is defined by the ABS as a person 15 years or older actively looking for or available for full‐ or part‐time work.8

We used Stata/IC 16 for data cleaning and descriptive analyses. Data were cleaned to retain data for all Victorian Statistical Areas 2 (SA2s) and then aligned with postcodes using the Australian Statistical Geography Standard (ASGS) coding 2019 locality to 2016 SA2 index9 (Supporting Information, file 1). Infections not associated with specific postcodes were not included in our analysis.

Incidence was calculated as the number of SARS‐CoV‐2 infections per 100 000 population by postcode area. Postcodes were grouped into case number percentiles, for all Victorian postcodes and for metropolitan and regional postcodes separately. We examined associations of incidence with socio‐economic factors in generalised linear regression models, with postcode area population as the exposure variable and assuming a zero‐inflated negative binomial distribution for incidence. This distribution was preferred because variance greatly exceeded the mean incidence value, and a zero‐inflated model was employed to fit the distribution while including a large number of postcodes with zero confirmed infections.

Incidence rate ratios (IRRs) per unit change in a covariate are reported with 95% confidence intervals (CIs) for the count component, and as odds ratios (ORs) for the log‐odds of a zero count for the zero component.

The relationship between the incidence of SARS‐CoV‐2 infections in postcode areas with at least one reported infection and area‐level social disadvantage (IRSD) was examined in separate negative binomial regression models for regional and metropolitan postcodes.

Our analysis was approved by the Barwon Health Research, Ethics, Governance and Integrity Unit as a negligible risk project (reference, 20/189).

In metropolitan postcodes, the incidence of SARS‐CoV‐2 infections increased with the proportion of the population who were Aboriginal or Torres Strait Islander people (per percentage point: IRR, 1.91; 95% CI, 1.10–2.73); in regional areas, the likelihood of zero infections increased with the proportion of Indigenous Australians (IRR, 1.62; 95% CI, 1.20–2.20) (Box 3).

The incidence of SARS‐CoV‐2 infections increased with household stress, as indicated by the proportions of people in households with mortgage repayments (metropolitan and regional) or rent levels (regional only) that exceeded 30% of household income; in regional postcodes the likelihood of zero infections declined as postcode household stress rose. Similarly, incidence increased with unemployment level in both regional (per percentage point: IRR, 1.50; 95% CI, 1.33–1.69) and metropolitan postcodes (IRR, 1.14; 95% CI, 1.05–1.23), and declined with the proportion of people with private health insurance (IRR, 0.95; 95% CI, 0.93–0.96) (Box 4).

For postcodes with at least one confirmed SARS‐CoV‐2 infection, incidence was lower in areas in IRSD quintile 5 (regional postcodes) and quintiles 4 and 5 (metropolitan postcodes) than areas in quintile 1 (the most disadvantaged quintile) (Box 5).

The incidence of SARS‐CoV‐2 infections increased with mean household size in regional postcodes (per person: IRR, 7.30; 95% CI, 4.37–12.2), and the likelihood of zero infections declined (IRR, 0.07; 95% CI, 0.02–0.24). Incidence increased with housing density, the proportion of people residing in rented properties, and the homelessness rate in regional areas, but not in metropolitan areas (Box 6).

The first COVID‐19 wave in Victoria was linked with returned overseas travellers, the second wave with inadequate quarantining of returned overseas travellers in hotel quarantine in Melbourne.3 Early outbreaks during the second wave were initially restricted to ten suburbs, subject to strict lockdown restrictions announced on 29 June 2020,11 and nine housing towers in North Melbourne and Flemington (about 3000 residents), subject to lockdown from 9 July 2020.12 These targeted containment measures were unsuccessful, and rapid transmission ensued across metropolitan Melbourne and, to a lesser extent, regional Victoria.

The influence of age may be partially related to work‐related socio‐economic factors. Compared with younger people, older workers have greater job security, lower rates of casual employment, and greater access to paid leave, while retired people are less prone to workplace exposure.13 Job insecurity and lack of leave entitlements discourage employees from seeking health care and reporting illness.14 Access to paid sick leave can reduce transmission during a pandemic by enabling workers to isolate themselves. It is also associated with preventive health and health improvement behaviours, such as routine health checks, influenza vaccination, and fewer visits to hospital emergency departments.14

Homeless people and people living in higher density housing were also disproportionately affected in earlier pandemics. Infection rates were reported to be higher in lower socio‐economic groups in the United States during the 1918–19 influenza pandemic.15 Homelessness and housing density can be temporarily relieved by providing crisis accommodation for self‐isolation and quarantine. An early program provided free accommodation to emergency and health care workers in the Victorian outbreak if they were required to isolate themselves.16 However, the workplaces with the highest numbers of SARS‐CoV‐2 infections in Victoria were abattoirs and warehouses, workplaces deemed economically essential,17 and these workers could probably not readily isolate themselves from others in their households. Further, jobs in abattoirs and warehouses are often casual, low wage positions, factors associated with other social risks for poor health.18

Box 7 depicts our basic conceptual model of the complex interactions between socio‐economic factors that can influence the incidence of SARS‐CoV‐2 infections. Despite the limitations these interactions place on defining the influence of individual factors, the associations we found our consistent with differences in job security, access to paid sick leave, affordable housing, and health care that affect people from culturally and linguistically diverse communities and younger people, to a greater extent than other people. Disseminating timely and effective health advice to people in areas with larger proportions of migrants and people from non‐English speaking backgrounds, where the incidence of SARS‐CoV‐2 infections was higher, is a major challenge during a pandemic.

We explored at the population level socio‐economic factors that may have influenced the incidence of SARS‐CoV‐2 infections in Victoria during 2020. The capacity of ecological study designs to explore these interactions is limited, and relationships at the area level may not reflect those at the individual level; for example, that incidence declined with postcode median age does not imply that younger people were more prone to infection. Variations in the incidence of SARS‐CoV‐2 infections across Melbourne and Victoria probably reflect the effects of a combination of physical, behavioural, environmental, and socio‐economic factors. More comprehensive research is required to evaluate the validity of the associations we have described, and how community partnerships and other models of public health practice can deal with their complexity. In future outbreaks, the high uptake of vaccination by adults may modify the patterns we observed in this study. Nevertheless, our findings provide insights for research and policy development aimed at reducing the impact of COVID‐19.

We report evidence that postcode‐level socio‐economic differences influenced the local incidence of SARS‐CoV‐2 infections in Victoria during 2020. The generalisability of our ecological analysis is limited, but our findings contribute to the pool of knowledge regarding the drivers of the COVID‐19 pandemic. Policies and health care reform that take social and economic inequalities into account could mitigate future waves of COVID‐19, help target vaccination programs to people at particular risk, better prepare Australia for future pandemics, and improve the health and wellbeing of all Australians, wherever they live. 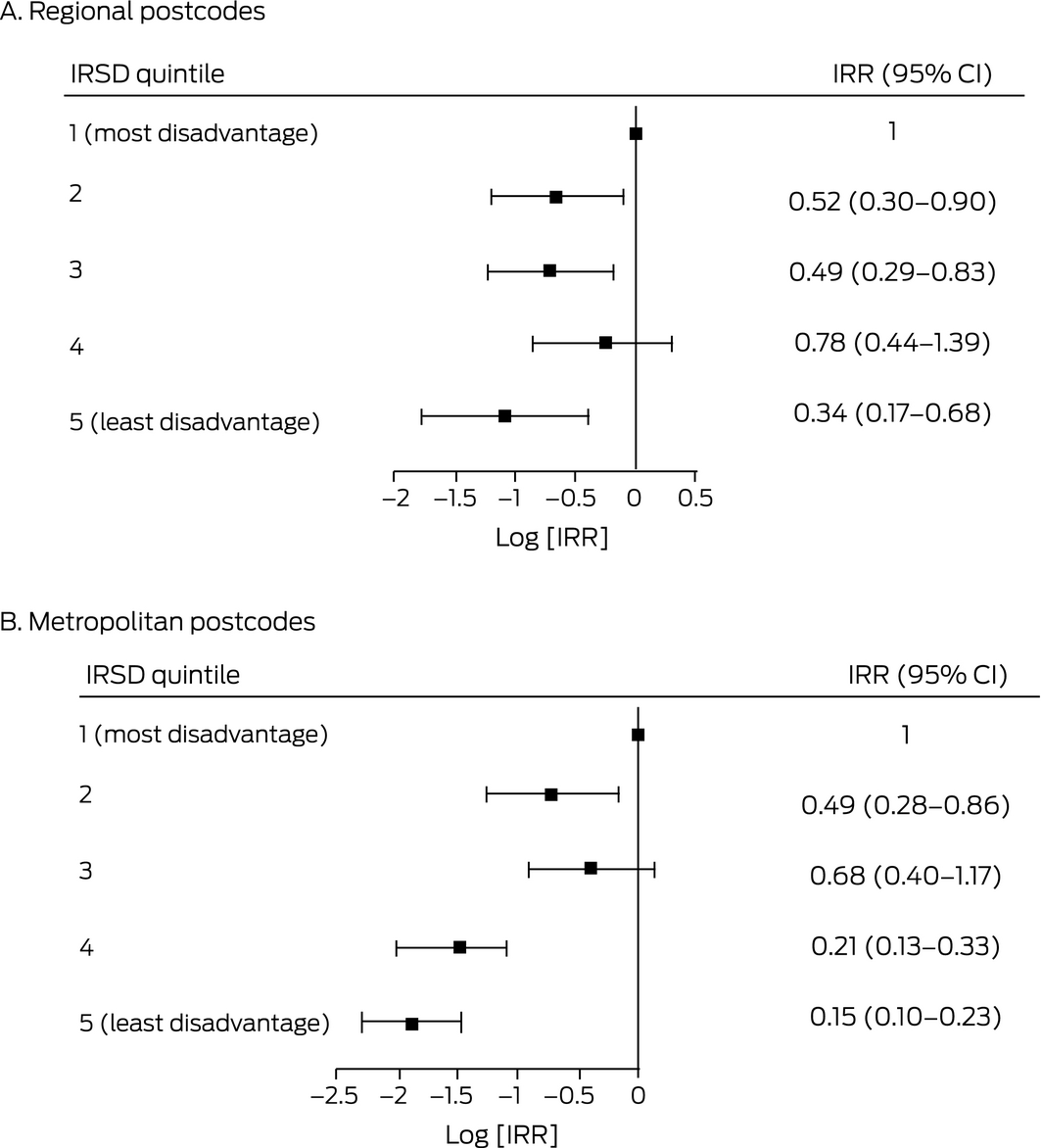 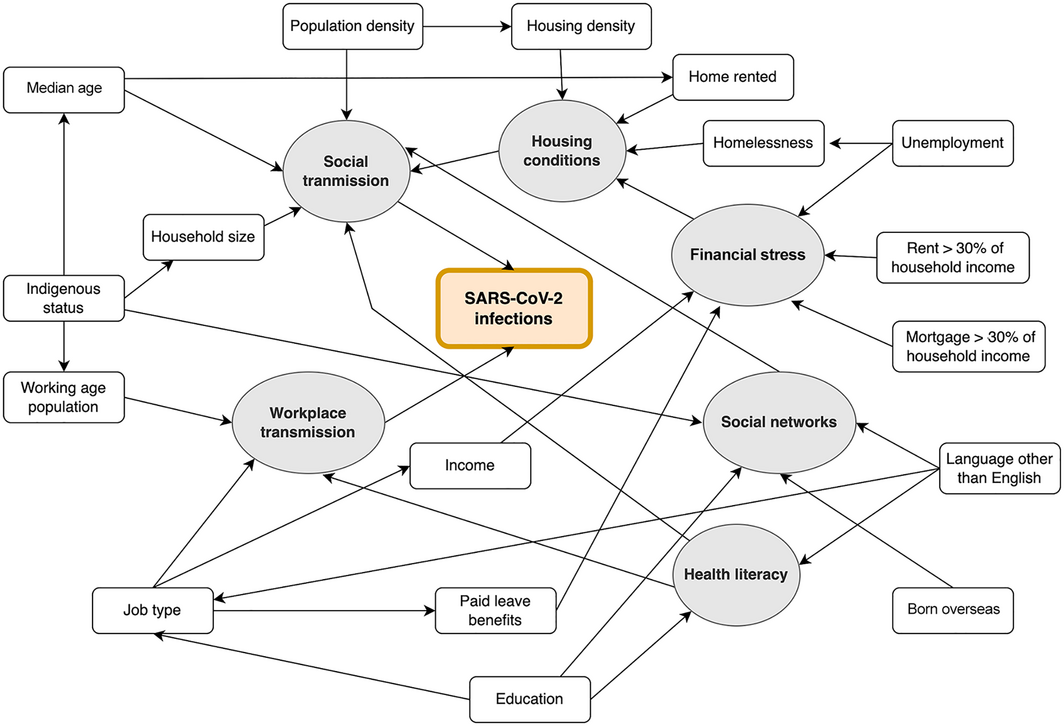 Grey circles indicate unmeasured mechanisms of transmission that link population factors (white) with the postcode incidence of SARS‐CoV‐2 infections. These factors interact with factors influencing workplace and social transmission because of differences in social networks, health literacy, and financial and housing conditions. Demographic characteristics also influence transmission; for example, the median age of the Indigenous population is lower than for other Australians. Postcodes with a larger proportion of working age people are likely to have larger median household sizes and to include younger children than areas with larger proportions of people of retirement age.