The prevalence of tinnitus in the Australian working population

Objectives: To estimate the prevalence of tinnitus in Australian working people; to identify occupational and demographic factors associated with tinnitus.

Conclusions: The prevalence of tinnitus in the Australian workforce is high, particularly in certain occupations. Workplace practices and conditions that increase the risk of tinnitus should be examined, and targeted workplace prevention strategies developed.

The known: Workplace exposure to noise and ototoxic chemicals increases the risk of tinnitus. National information on tinnitus in Australian workers has not been published.

The new: We estimate that about one‐quarter of Australian workers experience tinnitus, including half a million for whom it is always present. Its prevalence is higher among men than women, and increases with age. Tinnitus is more frequent in people employed as automotive workers, drivers, farmers, and in other trades.

The implications: Workers in certain occupations are at particular risk of developing tinnitus, and targeted workplace interventions are needed to reduce its impact on their quality of life.

Tinnitus — the perception of sound in the absence of an external stimulus — is common, and can disturb sleep, cause anxiety and depression, and substantially impair quality of life.1 Tinnitus is an increasing burden for healthcare systems2 and reduces workforce productivity.3 As the pathophysiology of tinnitus is poorly understood and effective treatments are few,4 the key to reducing its impact is prevention.

Risk factors for tinnitus include otologic conditions (eg, otosclerosis, otitis media), other medical conditions (eg, hypertension, thyroid disease), and lifestyle factors (eg, smoking, anxiety).5 However, the major risk factors for tinnitus are increasing age, hearing loss, and excessive noise exposure.6 Noise exposure is a risk factor for tinnitus both with and without hearing loss,7 and its effect is independent of age.6 Other workplace factors, such as solvents and exposure to lead and carbon monoxide, can also contribute to otologic damage.8

We analysed data from the Australian Workplace Exposure Survey (AWES) ‒ Hearing study, a national cross‐sectional telephone survey using mobile and landline numbers conducted during 7 June 2016 ‒ 20 March 2017 that assessed workplace exposures associated with otological damage in Australia. The design and methodology of the AWES–Hearing study have been described in detail elsewhere.10 Currently employed people aged 18–64 years were recruited by random digit dialling, and a sample of eligible participants representative by sex of the workforce population was achieved by stratified sampling.

Demographic information collected for the survey included age group, highest education level, residential postcode, place of birth, job title, job description, size of employer business, and smoking status (“Are you a current smoker and smoke at least one cigarette a week?”). Occupations were classified by job title and job description according to the Australian and New Zealand Standard Classification of Occupations (ANZSCO)11 (Supporting Information, table 1). Residential areas were classified by postcode as major cities or as regional or remote,12 and countries of birth were categorised by region according to the International Telecommunication Union country classification13 (Supporting Information, table 2).

Participants were asked “Have you ever had tinnitus (ringing, buzzing or other sounds in your ears that only you can hear)?”; response options were “no”, “yes: sometimes”, “yes: often”, and “yes: all the time”. If the participant answered “yes”, they were asked “How long does this tinnitus (the noises) usually last?”; response options were “less than one minute”, “a few minutes”, “up to an hour”, “hours to days”, and “always present”. These questions are part of the hearing handicap questionnaire developed by the National Acoustic Laboratories in Sydney and used recently in a survey about recreational noise.14

There are no standard criteria for classifying the temporal characteristics of tinnitus. “Occasional”, “intermittent”, and “constant tinnitus” are terms frequently used in publications, but are neither well defined nor consistently used.15 We applied our own categories, based on answers to the two tinnitus survey questions. Participants who experienced tinnitus sometimes and only for a few minutes were presumed to have transient ear noise, a non‐pathologic phenomenon,15 and we included these participants in our “no tinnitus” category. Those who reported that tinnitus was “always present” were classified as having “constant tinnitus”, even had they also reported having tinnitus “sometimes” or “often”, which we attributed to habituation or varying awareness. “Any tinnitus” was defined as experiencing tinnitus occasionally, intermittently, or constantly.

Statistical analyses were conducted in Stata 14 or R (R Foundation for Statistical Computing). To estimate the prevalence of tinnitus in the Australian workforce, survey data were weighted using a raking technique16 that adjusted for differences between the characteristics of our sample and census data for the Australian workforce, accessed via the Australian Bureau of Statistics TableBuilder utility.17 We used 2016 census data for all variables except socio‐economic status (Index of Relative Socio‐economic Advantage and Disadvantage; IRSAD)18 and remoteness area,12 for which 2011 data were used, as 2016 data were not available. Raking was performed with the R anesrake function.19 We compared the sample and census population proportions for seven variables: age group, education level, remoteness, state of residence, birth place (Australia/New Zealand or elsewhere), socio‐economic status, and occupational group. When the sample and census proportions differed by more than five percentage points, we included the variable in the raking procedure; all seven variables met this criterion.

Using the raking weights, we estimated the prevalence (with 95% confidence intervals, CIs) of occasional, intermittent, constant, and any tinnitus in Australian working people by sex, age group, occupation, education level, remoteness, region of birth, smoking status, and employer business size. We estimated the numbers of workers with tinnitus among all Australians with ANZSCO codes recorded in the 2016 census that corresponded to two‐digit ANZSCO codes in our sample (ie, 9 708 644 people, 97% of the total working population).

The associations of constant or any tinnitus with demographic and occupational factors, both overall and stratified by sex, for participants who provided complete data (ie, no missing responses for any variables) were assessed using multiple logistic regression, and reported as odds ratios (ORs) with 95% CIs. For this analysis, we used unweighted sample data, as they had been collected randomly; ie, independently of tinnitus status.

Our study was approved by the Curtin University Human Research Ethics Committee (HR58/2014).

Prevalence of tinnitus, by occupation

Other risk factors for tinnitus

On the basis of our survey, we estimate that one‐quarter of the Australian workforce experience tinnitus. Differences between studies in tinnitus classification and sampling methods make comparisons of its reported prevalence difficult. Our findings are similar to those of the 2008 Swedish Longitudinal Occupational Survey of Health.9 The overall estimated prevalence among Swedish workers was 26% (our study: 24.8%); among men it was 31% (our study: 28.6%), among women 22% (our study: 20.7%). The prevalence of constant tinnitus was 7% in the Swedish survey (our study: 5.5%), and in both countries tinnitus was twice as prevalent among men as among women (Sweden: 10% v 5%; our study: 7.5% v 3.3%). Our estimates are also similar to the reported prevalence of tinnitus among all adults in the United States (25.3%7) and Poland (20.1%20).

We estimate that more than 500 000 Australian workers experience constant tinnitus, and that the prevalence is highest among men aged 55‒64 years (15.9%). As most workers exposed to workplace noise and ototoxic chemicals in Australia are men,10 this finding was unsurprising, but after adjusting for worker characteristics (including occupational group) and demographic factors, the odds of having constant tinnitus were still 57% higher for men than women. This difference may be partially explained by risk factors we did not examine, such as leisure time and firearm noise.7

The prevalence of tinnitus was highest in occupations most exposed to hazardous noise levels (farming, construction work, automotive industries, machine operators10). One exception was the drivers group, for which the likelihood of any tinnitus was second only to that automotive industry workers, despite a much lower risk of hazardous workplace noise exposure.10 Drivers are, however, exposed to ototoxic chemicals, including carbon monoxide (84.1% with medium to high exposure levels10). The association of tinnitus with workplace noise is recognised,6,7 but associations with workplace ototoxic chemicals still require detailed examination.

We found that the likelihood of tinnitus was lower for male workers born in Asia. This finding is consistent with a report that the prevalence of tinnitus among American Asians is significantly lower than for other American ethnic groups, although the difference was reduced by adjusting for comorbid conditions, noise exposure, and depression.21

We found that smoking was a significant risk factor for tinnitus only in women. Smoking has previously been associated with tinnitus, but most studies have not estimated the risk by sex.22

Sample bias is a limitation for all population studies, but the AWES–Hearing study used random digit dialling of telephone numbers, stratified by sex, to achieve a representative sample of the Australian workforce. Further, our raking technique corrected for differences between our sample and the Australian working population.

We excluded 16 people who could not hear well enough to complete the telephone survey (0.01% of those deemed ineligible), which also excluded people who ceased working because of hearing loss or tinnitus. We may therefore have underestimated the prevalence of tinnitus. Our study was conducted during 2016‒17; workplace and lifestyle changes caused by the coronavirus disease 2019 (COVID‐19) pandemic — eg, reduced or increased stress, differences in environmental exposures — may have since affected the prevalence patterns of tinnitus.23

Tinnitus questionnaires cannot be validated, as there is no recognised standard for measuring tinnitus. Further, we assessed this complex symptom with two self‐assessment questions. There is no definitive criterion for assessing tinnitus; participants in some cross‐sectional studies have been asked whether they have “bothersome tinnitus”, but it is often unclear what this term encompasses.24 We characterised tinnitus by its persistence because this reflects its presence rather than the participant’s emotional response to the symptom. Our findings were similar to those of comparable studies, suggesting that our questions and methodology were appropriate.

As AWES‒Hearing was a cross‐sectional study, conclusions about causal relationships between reported workplace factors and tinnitus cannot be drawn. Tinnitus is a complex symptom with a variety of otologic, neurologic, infectious, leisure noise, drug‐related, and lifestyle risk factors, but in our study we examined only personal and work‐related characteristics. Finally, we did not consider the significance of past occupations for current tinnitus.

Tinnitus is highly prevalent among working people in Australia, particularly those in certain occupational groups, which may indicate that much of the burden of tinnitus is preventable. A clinically validated instrument for categorising tinnitus is required, and modifiable risk factors should be explored.

Box 1 – Tinnitus status of 4970 interviewees, according to their responses to the two tinnitus‐related questions in the Australian Workplace Exposure Survey (AWES) ‒ Hearing survey

Box 2 – Estimated prevalence of occasional, intermittent, and constant tinnitus in the Australian workforce, by sex and age group

Box 3 – Adjusted prevalence of any and constant tinnitus (with 95% confidence intervals), by occupation group* 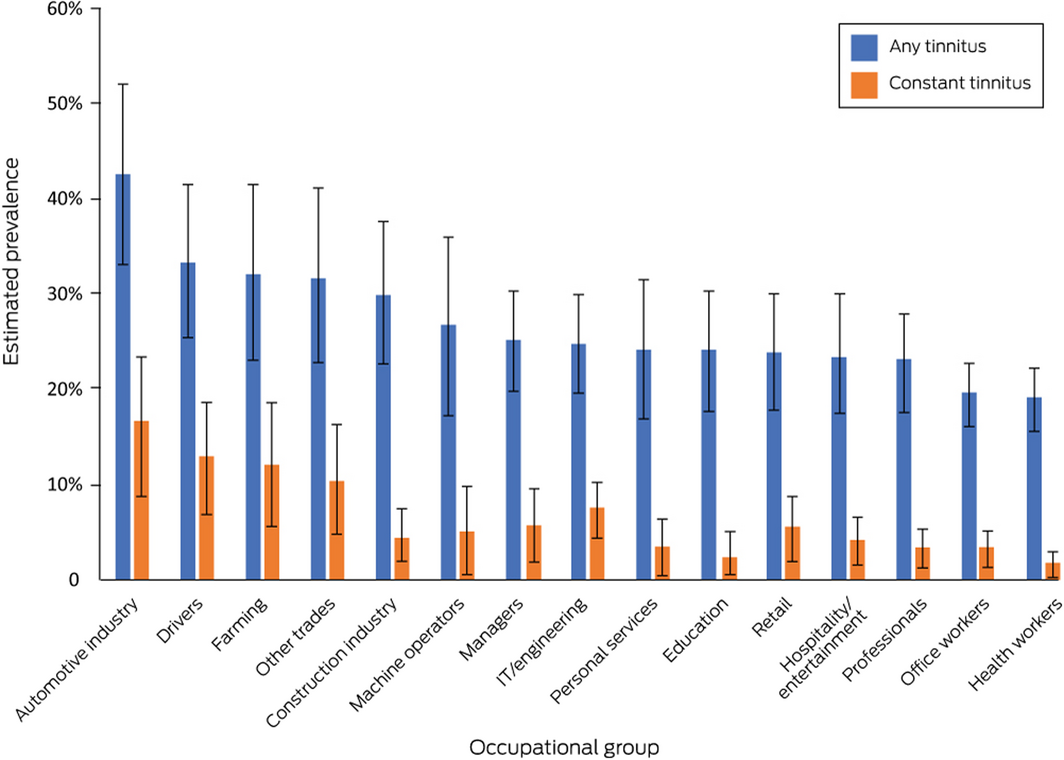 This investigation was funded by the National Health and Medical Research Council (#1059562).