Objectives: To determine the characteristics and population rates of barbiturate‐related hospitalisations, treatment episodes, and deaths in Australia, 2000–2018.

Conclusions: While prescribing and community use of barbiturates has declined, the population rate of intentional self‐harm using barbiturates has increased. The major harm associated with these drugs is now suicide.

The known: Barbiturates are no longer routinely prescribed in Australia because of the considerable risks of dependence and toxicity.

The implications: With the declines in prescribing and community use of barbiturates, the major concern regarding barbiturate‐related harm has shifted from accidental overdoses to their use in suicide.

Barbiturates are central nervous system depressants that were widely prescribed during the 20th century as anxiolytics, hypno‐sedatives, and anticonvulsants.1,2 Recognition of the risks of barbiturate dependence and toxicity and the high incidence of poisoning led to supply restrictions (eg, reductions in pack sizes and number of permitted repeat dispensings) and to barbiturates being supplanted by benzodiazepine and Z‐drug hypnotics.1,2,3,4,5,6 Barbiturates are no longer routinely prescribed for humans, except for rare indications such as induction anaesthesia and refractory epilepsy;1 during the period 2001‒2015, the annual number of prescriptions in Australia declined from 50 000 to 27 000.7

Nevertheless, barbiturate toxicity remains a problem, particularly when used for suicide.8,10,11,12,13,14,15,16,17 We recently characterised the 511 barbiturate‐related deaths in Australia during 2000‒2019, three‐quarters of which involved pentobarbital.9 Among those who died, we distinguished two profiles: younger people with mental health problems and low levels of physical disease, and older people with higher levels of physical disease but low levels of mental health problems. About 90% of the deaths were caused by intentional overdoses, and the proportion of barbiturates purchased online increased across the study period; in 8% of cases, the drugs had been obtained from veterinary practices. Evidence of a prior suicide attempt was documented for only 15% of deaths,9 reflecting the lethality of deliberate barbiturate overdose, and possibly also the increased availability of online materials on euthanasia.

We analysed National Hospital Morbidity Database (NHMD) hospital separations (hospitalisations) data. The NHMD comprises episode‐level records from all Australian public and private hospitals. The principal diagnosis and up to 99 additional diagnoses are coded at separation (since June 1999) according to the International Statistical Classification of Diseases and Related Health Problems, tenth revision, Australian modification (ICD‐10‐AM).18 We extracted records for the period 1999‒2000 to 2017‒18 in which the ICD‐10‐AM code T42.3 (poisoning by barbiturates) was included in the principal diagnosis field or any additional diagnosis field (the barbiturates involved are not specified). Several hospitalisations could be recorded for an individual in a single year. We excluded records for hospitalisations with the care type “newborn without qualified days” and those for “posthumous organ procurement” or “hospital boarders”. External cause of injury and poisoning coded as “intentional self‐harm” (X60–X84) was deemed to indicate attempted suicide, and “accidental injury and poisoning” (V01–X59) accidental poisonings (Supporting Information, table 1).

Drug treatment episodes data were extracted from the Alcohol and Other Drug Treatment Services National Minimum Data Set (AODTS NMDS), which compiles data from publicly funded government and non‐government agencies that provide specialist alcohol and other drug treatment services.19 A treatment episode is deemed closed when treatment is completed, there has been no contact between client and provider for three months, there has been a change in the main treatment, principal drug of concern or delivery setting, or treatment has ended. Data include self‐reported information for people assessed or accepted for treatment. Standardised treatment data collection commenced in 2000–01; we had access to unit record data from 2002–03 (data extracted to 2017–18) for episodes in which the client identified barbiturates as their principal or other drug of concern (Australian Standard Classification of Drugs of Concern [ASCDC20] codes 2300, 2301, 2302, 2303, 2399; in this study, we did not distinguish between the barbiturates involved) (Supporting Information, table 1). Several treatment episodes could be recorded for an individual in a single year.

We summarise demographic and other characteristics as descriptive statistics. We analysed and report data by financial year (1 July – 30 June), reflecting hospital and treatment episode record practice. Population rates were calculated using the Australian Bureau of Statistics resident population at June of the corresponding year, directly age‐standardised to the 2001 Australian standard population.21 Changes in population rates were analysed by Joinpoint (version 4.9.0.0) regression (National Cancer Institute [US]; https://surveillance.cancer.gov/joinpoint). We fitted a maximum of two joinpoints, with a minimum of three data points between joinpoints; model fit was assessed by permutation testing. The estimated average annual percentage change (AAPC) in rate was determined for each segment as a weighted mean of the annual percentage change in the fitted model; an AAPC with a 95% confidence interval (CI) not including zero was deemed statistically significant. We also undertook a sensitivity analysis restricted to data for 2002–03 to 2016–17 (ie, the period for which data on hospitalisations, treatment episodes, and deaths were all available).

We identified 1250 barbiturate‐related hospitalisations, including 663 of women (53%); 510 were of people aged 30–49 years (41%), and in 378 cases (30%) the patients were aged 50 years or more. For 749 separations (60%), the principal diagnosis was barbiturate toxicity; the most frequent other principal diagnoses were injuries and poisonings involving other substances (338 cases, 27%). A total of 791 hospitalisations (63%) were deemed to be results of attempted suicide using barbiturates (Box 1).

Mental health diagnoses were documented as other diagnoses in 719 cases (58%), the most frequent being mood (360 cases) and substance use disorders (249 cases). Physical health diagnoses were documented in 581 cases (46%); diseases of the nervous system were most frequent (213 cases), including 118 epilepsy diagnoses. Hospital length of stay was one day for 547 hospitalisations (44%), and longer than seven days for 276 (22%) (Box 1).

The results of sensitivity analyses restricted to the period 2002–03 to 2016–17 were similar to those of the main analyses (Supporting Information, table 2).

We have described disparate patterns of change in the national population rates of barbiturate‐related hospitalisations, treatment episodes, and deaths in Australia during 2000–2018, providing a complex picture of contemporary barbiturate‐related harm. Taken together, it appears that barbiturates are no longer frequently misused as drugs of dependence, and deaths are typically the result of deliberate self‐harm rather than accidental poisoning.

Consistent with reduced barbiturate prescribing in Australia, the rates of barbiturate‐related hospitalisation declined markedly for both intentional and accidental poisonings. These declines may reflect the generally lower community availability of these drugs. It is notable that almost two‐thirds of hospitalisations were linked with deliberate self‐harm, confirming the continued association of barbiturates with suicide. Further, mental health diagnoses (particularly mood disorders) were recorded in nearly three in five hospitalisations, and physical health diagnoses were also common. The frequency of epilepsy diagnoses is probably linked with the use of barbiturates to treat some patients with this condition. Overall, the burden of disease for people admitted to hospital with barbiturate‐related harms was considerable, and attempted suicide was the most frequent reason for their admission.

In contrast to hospitalisations, treatment episodes, and prescribing, the population rate of barbiturate‐related deaths increased significantly; in particular, the number of hospitalisations linked with deliberate self‐harm declined, but the number of deaths increased. We have previously noted that one‐third of the people who died of barbiturate overdose during 2000‒2017 had access to materials regarding euthanasia, including more than half of those aged 65 years or more.9 In most cases, the drugs appear to have been procured for self‐harm rather than misuse, and evidence of a previous suicide attempt was available in only 78 cases (15%).9 It would therefore appear that a large proportion of people who attempt suicide using barbiturates succeed at their first attempt, reflecting well considered suicide planning and the lethality of barbiturates.

While the prescribing and community use of barbiturates has declined, their increased use for intentional self‐harm, particularly by people with mental health problems, is worrying. Clinicians should be aware of their association with suicide when prescribing these drugs. Access to barbiturates via the internet is a difficult public health and border control problem. Although their use for medically supervised euthanasia is now legal in some Australian states (but not during the period covered by our analysis), restricting access to these high lethality drugs remains important, particularly to people with mental health disorders. Whether the availability of medically supervised euthanasia reduces the online purchasing of these drugs will be a question of major public health interest.

Barbiturate‐related clinical events are relatively uncommon, and chance fluctuations may have influenced our findings. However, the comparative rarity of these events does not diminish their clinical and public health significance. We could not determine with our analysis whether the same barbiturates were most frequently involved in hospital separations, treatment episodes, and deaths. As an individual could be hospitalised several times during a single year, our hospitalisation analysis was of events, not of unique patients. Comparison of diagnosis and external cause data over time must be cautious, as the classifications and coding standards used can change, and our data may not have captured all comorbid conditions. Identifying the drugs of concern for treatment episodes relied on reports by patients, and our analysis was again of events, not unique patients. Variations in treatment rates may also reflect changes in the number of treatment agencies and their capacity. Finally, barbiturate‐related deaths for which a medical practitioner signs the death certificate are unlikely to be referred to a coroner, and will therefore not be included in the NCIS. Deaths for which investigations had not yet been finalised were not included in our analysis, and barbiturates were not routinely examined for all toxicology reports. Consequently, our estimates, particularly for the most recent years of our analysis, are probably conservative.

The prescribing and community use of barbiturates has declined in Australia. The major harm associated with these drugs is now their use for suicide. In this changing environment, it is difficult to predict whether the changes we have described will continue, but ongoing surveillance is warranted. Specifying in administrative datasets the barbiturates implicated in hospitalisations, treatment episodes and deaths, rather than reporting aggregated data for all barbiturates, would help with the targeting of specific countermeasures.

Box 2 – Drug treatment episodes in which barbiturates were noted as the principal or other drug of concern, Australia, 2002–03 to 2017–18 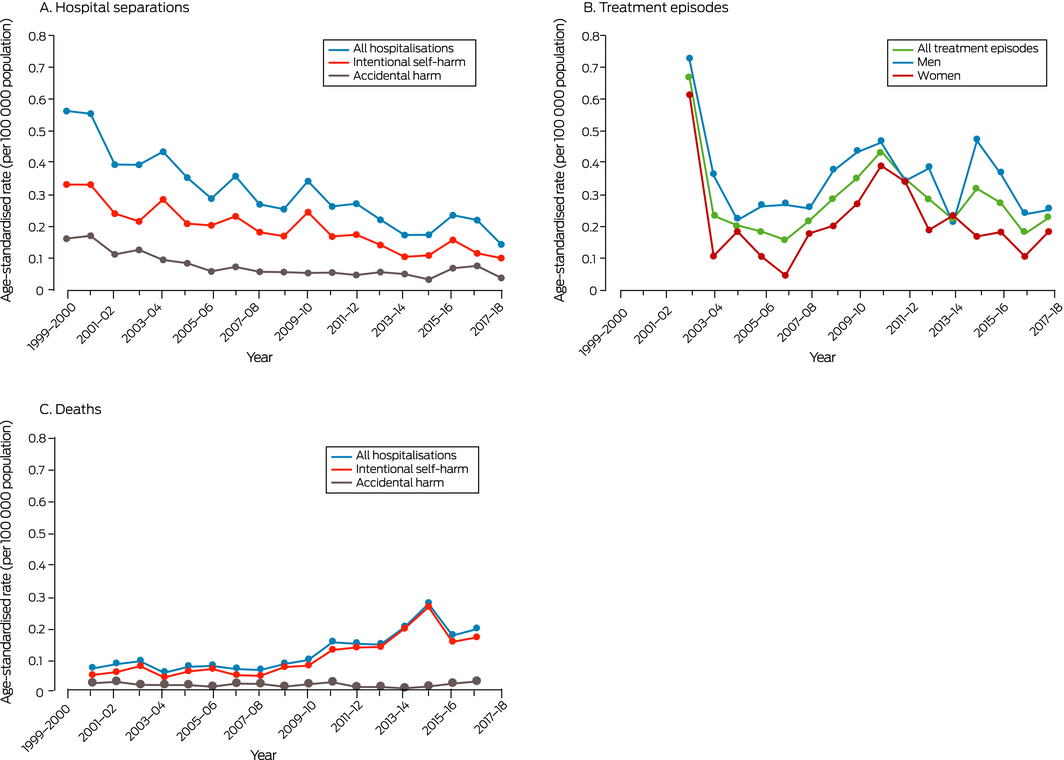 This work was funded by the National Drug and Alcohol Research Centre at the University of New South Wales, and is funded by the Australian Department of Health. We acknowledge the Australian Institute of Health and Welfare and jurisdictional data custodians for providing data from the National Hospital Morbidity Database and the Alcohol and Other Drug Treatment Services National Minimum Data Set. We acknowledge the Victorian Department of Justice and Community Safety as the source organisation for the coronial data analysed, and the National Coronial Information System as the data source.