Objective: To assess the cost‐effectiveness of breast reduction surgery for women with symptomatic breast hypertrophy in Australia.

Design: Cost‒utility analysis of data from a prospective cohort study.

Main outcome measures: Health care costs (for the surgical admission and other related hospital costs within 12 months of surgery) and SF‐6D utility scores (measure of health‐related quality of life) were used to calculate incremental costs per quality‐adjusted life‐year (QALY) gained over 12 months, extrapolated to a 10‐year time horizon.

Conclusions: Breast reduction surgery for women with symptomatic breast hypertrophy is cost‐effective and should be available to women through the Australian public healthcare system.

The known: Breast hypertrophy causes physical and psycho‐social impairment in women, and breast reduction surgery is the most effective treatment. However, access to surgery is often restricted by health policies that deem it non‐therapeutic, including in Australia.

The new: The first economic evaluation in Australia of breast reduction for women with symptomatic breast hypertrophy indicated that it is cost‐effective for improving their health‐related quality of life ($7808 per quality‐adjusted life‐year).

The implications: Healthcare systems in all Australian states should support access to breast reduction surgery for both private and public patients with symptomatic breast hypertrophy.

Breast hypertrophy affects quality of life and causes physical and psycho‐social problems for women. Breast reduction surgery is highly effective for relieving the pain and functional problems associated with breast hypertrophy and improves health‐related quality of life.1,2,3 However, breast reduction is often regarded as a cosmetic rather than a functional procedure, and health care funders and third party providers restrict access to surgery, despite evidence of its therapeutic benefit.

While the clinical effectiveness of breast reduction surgery is documented, high quality evaluations of its cost‐effectiveness have not been published. Cost–utility analysis compares the incremental costs and incremental health outcomes (measured as quality‐adjusted life‐years [QALYs] or disability‐adjusted life‐years [DALYs]) of an intervention with usual practice or a control group. As this analysis provides a consistent unit of outcome measurement (cost per QALY gained), the cost‐effectiveness of different health care interventions can be compared. For this reason, cost–utility analysis is recommended by the Medical Services Advisory Committee (MSAC).11 The primary objective of our study was to determine whether breast reduction surgery in Australian public hospitals is cost‐effective.

We analysed data collected for a prospective cohort study that included adult women with symptomatic breast hypertrophy (aged 18 years or older) assessed for bilateral breast reduction at the Flinders Medical Centre, Adelaide, during 1 April 2007 – 28 February 2018.2 Participating women who underwent surgery completed assessments before surgery and three, six and twelve months after surgery. A control group of women with breast hypertrophy, who had sought but not yet undergone breast reduction surgery, completed study questionnaires at baseline and twelve months after enrolment.

Direct hospital costs for the surgical intervention were determined from the perspective of the South Australian public health system. Costs data for individual women were obtained from hospital finance departments, based on surgical procedure codes for the surgical admission and all related hospital costs within twelve months of surgery for outpatient clinical care, return‐to‐theatre admissions, and revision procedures. Costs were adjusted for inflation to 2021 Australian dollars.

The health quality of life‐related effectiveness of breast reduction surgery was measured as QALY gain over twelve months, calculated at the patient level using SF‐6D utility values and the area‐under‐the‐curve method.14 We estimated unadjusted and regression‐adjusted QALYs (for differences in SF‐6D utility scores at baseline).12 For the base case analysis, baseline and 12‐month SF‐6D data were used to estimate QALYs. As we assumed that health‐related quality of life gains would be maintained beyond twelve months, 12‐month QALYs were extrapolated to a 10‐year time horizon. As recommended by MSAC guidelines,11 we applied a discount rate of 5% per year to QALY gains beyond one year. We assumed that the direct costs of surgery were confined to the 12‐month study period, and they were not discounted.

Multiple imputation was used to account for any missing cost or outcome values. Imputed values were generated using predictive mean matching.16 A total of 50 multiple imputed complete datasets were generated, and are presented as the base case analysis.

We tested the robustness of our base case estimates in a series of sensitivity analyses. In the first, we restricted the economic evaluation to complete cases (women for whom complete outcomes information at baseline and 12 months was available). In the second sensitivity analysis, QALY estimates for the intervention group were derived from data for all four time point assessments. In the third sensitivity analysis, we extrapolated 12‐month QALYs to a 40‐year horizon, assuming that the health‐related quality of life gain would be maintained until the end of life (life expectancy for women in Australia: 84.6 years).17 The fourth sensitivity analysis conservatively assumed that baseline control group SF‐6D utility scores were maintained at twelve months.

Statistical analyses were performed in SPSS for Windows 25.0 (IBM) or Stata 16. Data for continuous variables are summarised as means with standard deviations (SDs), and differences between groups as mean differences with 95% confidence intervals (CIs). The statistical significance of differences for socio‐demographic variable was assessed in independent samples t tests. Data for categorical variables are summarised as frequencies and proportions, and the statistical significance of differences were assessed in χ2 or Fisher exact tests.

Two hundred and fifty‐one women who underwent bilateral breast reduction were included in the intervention group, of whom 209 completed the baseline questionnaire and at least one post‐operation assessment (83%): 191 at three months (91%), 183 at six months (88%), and 193 at twelve months (92%). SF‐6D utility scores were generated for 141 of the 159 participants who completed all four assessments (63%) without any missing responses to SF‐36 items.

In the control group, study questionnaires were mailed to 350 women on the breast reduction surgery waiting list; 160 completed the baseline questionnaire (46%), of whom 124 also completed 12‐month assessments; SF‐6D utility scores could be generated for 119 participants. The baseline demographic characteristics of the intervention and control groups were similar (Box 1).

The mean SF‐6D utility score for the intervention group was higher at three months than at the baseline assessment, and was similar at the 3‐, 6‐ and 12‐month assessments; the mean value for women in the control group was slightly lower at twelve months than at baseline (Box 2; Supporting Information, table 1). A sensitivity analysis restricted to women with complete outcomes data yielded a similar result (Box 2). In the base case analysis, the mean QALY gain over ten years was higher for the intervention than the control group (adjusted difference, 1.519 QALYs; 95% CI, 1.362–1.675 QALYs) (Box 3).

A larger proportion of smokers (24 of 92, 26%) than of non‐smokers (11 of 117, 9%) had post‐surgical complications, and the mean tissue resection weight was greater for women who experienced complications (1506 g; SD, 974 g v 1192 g; SD, 637 g), Other participant characteristics were not associated with statistically significant differences. The mean change in 12‐month SF‐6D scores was similar for women with (0.29 points; SD, 0.27 points) and without complications (0.31 points; SD, 0.29 points) (Supporting Information, table 2).

In the base case analysis, multiple imputation was used to estimate missing costs data (13 observations, 6.2%) and SF‐6D utility scores at 12 months (16 observations, 7.7%).

Sensitivity analyses yielded similar results to the main analysis; improvement in outcomes was consistently greater for the intervention than the control group, and the estimated ICERs for the intervention were considerably below the two recommended willingness‐to‐pay thresholds (Box 3).

The 10‐year time horizon in our analysis is conservative. In a long term study, we found that the benefits of surgery do not decline over longer follow‐up (up to 12 years),23 suggesting that the cost‐effectiveness of surgery may be even more favourable.

Quantifying the effectiveness of breast reduction as incremental cost per QALY gain facilitates direct comparisons with medical interventions for other chronic health conditions. Assessment of the cost‐effectiveness of orthopaedic arthroplasty procedures in Australia found that both total hip and total knee replacement were cost‐effective, with respective estimated costs of $7500 and $10 000 per QALY.24 Bariatric surgery for the treatment of obesity was found to be less cost‐effective in Australia, but its cost was still below willingness‐to‐pay thresholds.12,15,25 Cost–utility analysis indicated that cochlear implantation was cost‐effective for Australian adults with hearing loss compared with bilateral hearing aids, with an ICER of $11 160 per QALY.26 Laser‐assisted cataract surgery is not cost‐effective compared with alternative medical interventions, including conventional cataract surgery, because of the higher costs of the newer technology.27 In summary, the cost per QALY for breast reduction surgery compares favourably with those for other medical interventions widely accepted in Australian public health care.

A major strength of our study was the use of prospectively collected health‐related quality of life data, and our QALY estimates were based on information supplied by the women affected, not clinician opinion or literature review. In addition, our study assessed costs at the patient level, and took into account factors that influence total costs, including hospital length of stay, in‐hospital complications, and return‐to‐theatre re‐admissions. Further, hospital costs data included expenses incurred after the initial hospital admission, including all hospital outpatient clinic appointments and any revision procedures during the subsequent 12 months. The participation rate in our study was relatively high, and a sensitivity analysis restricted to complete cases yielded similar results, suggesting that multiple imputation did not bias our estimates.

We included all direct hospital costs, but not indirect costs to the participants and their families (such as loss of income because of time off work), primary and specialist care, physiotherapy, or other expenses outside the hospital, nor did it include costs for other relevant hospitalisations. However, indirect costs at baseline would probably have been similar in both study groups and would not have markedly influenced our analysis. In addition, we did not evaluate a randomised clinical trial, and the generalisability of the results of our single‐institution study is unclear. As the women in our study were not blinded to treatment, reporting bias was possible. Estimated differences between the intervention and control groups were based on prospective assessment of health‐related quality of life in both groups at baseline and 12 months. However, including all four assessment time points for the intervention group to estimate QALYs yielded conclusions similar to those of the main analysis; the ICER was indeed more favourable in this analysis, as the marked improvement in intervention group utility scores between baseline and three months increased the area under the curve for QALY calculations.

In our cost–utility analysis, we found that breast reduction surgery for women with symptomatic breast hypertrophy is cost‐effective in Australian public health care; the incremental cost per QALY gained is considerably lower than the implicit cost‐effectiveness threshold. This finding is strengthened by the fact that the probability of the intervention being cost‐effective was high across a range of feasible willingness‐to‐pay values. Our study provides evidence that healthcare systems in all Australian states should support access to breast reduction surgery for both private and public patients.

Box 1 – Baseline characteristics of the intervention and control groups* 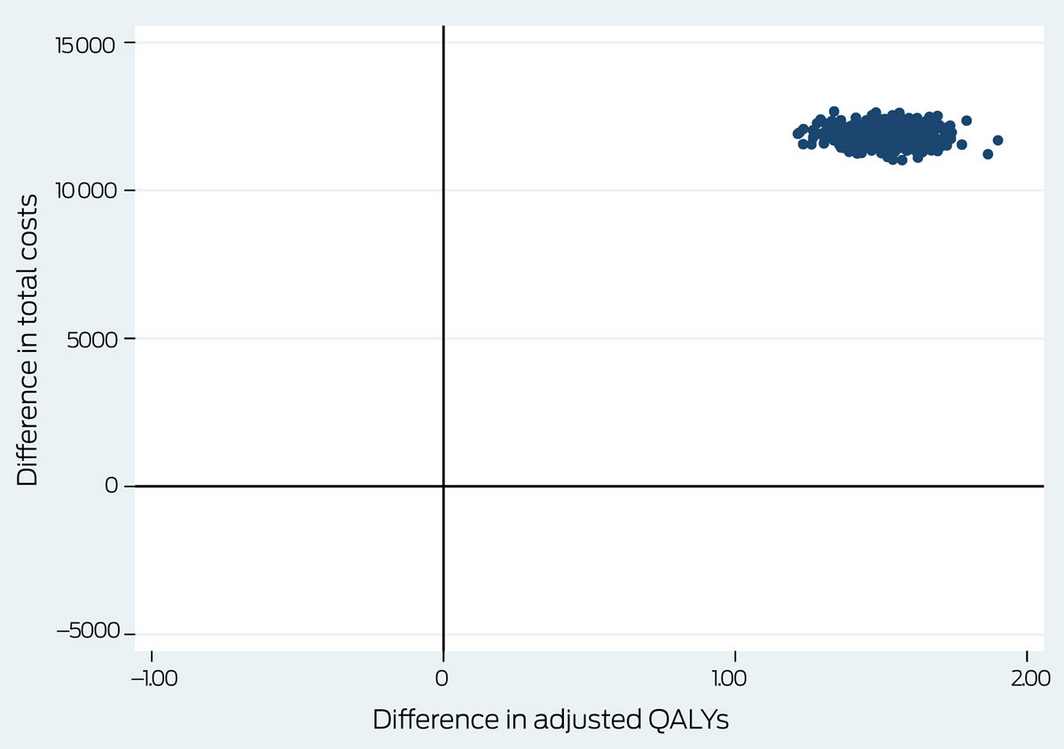 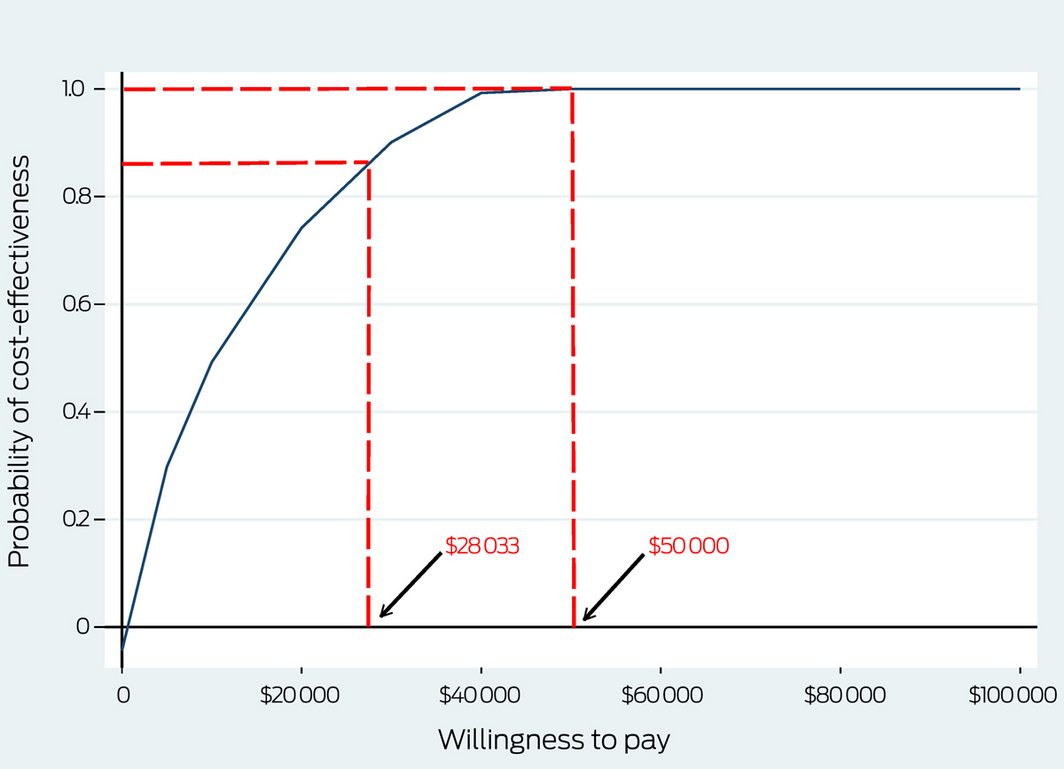 We thank the participants for their involvement in the study. Tamara Crittenden holds an Australian Government Research Training Programme PhD Scholarship.