Objectives: To examine the competing risks of death (any cause) and of kidney failure in a cohort of Australian adults with severe chronic kidney disease.

Main outcome measures: Death or kidney failure (defined as eGFR below 10 mL/min/1.73 m2 or initiation of dialysis or kidney transplantation) within five years of diagnosis of stage 4 chronic kidney disease.

Conclusions: For older Australians with incident stage 4 chronic kidney disease, the risk of death is higher than that of kidney failure, and the latter risk declines with age. Clinical guidelines should recognise these competing risks and include recommendations about holistic supportive care, not just on preparation for dialysis or transplantation.

The known: Clinical guidelines recommend that patients be referred to kidney specialists, to prepare for kidney failure or kidney replacement therapy, if their estimated glomerular filtration rate (eGFR) is persistently below 30 mL/min/1.73 m2.

Clinical guidelines recommend that a person with chronic kidney disease (CKD) be referred to a kidney specialist if their estimated glomerular filtration rate (eGFR) falls below 30 mL/min/1.73 m2 (stage 4 CKD).1 This pathway of care, managed by a multidisciplinary team, attempts to slow progression of disease, to avert and treat complications, and, crucially, to prepare patients for decisions about options for treating future kidney failure, including dialysis and transplantation.

The aim of our study was to explore the competing risks of death from any cause and from kidney failure in a cohort of Australian adults with severe kidney disease, both to facilitate comparison with overseas findings and to inform local clinical practice.

The Tasmanian Chronic Kidney Disease study (CKD.TASlink) was a retrospective cohort study that analysed a dataset compiled by linking seven local health information datasets. The methodology has been reported in detail elsewhere.6 Briefly, pathology data for 490 012 people during the period 1 January 2004 – 31 December 2017 were obtained from four community and hospital‐based pathology providers (Hobart Pathology, Launceston Pathology, North West Pathology, Royal Hobart Hospital Pathology; two smaller pathology providers were not included). Individuals were selected if assessment of serum creatinine level had been requested by their doctors. Our study population included an estimated 86.8% of the resident adult population and about 97.5% of deaths in Tasmania during the final five years of the study, 2013–2017.6,7

The criterion for stage 4 CKD was a mean eGFR of 15–29 mL/min/1.73 m2. We calculated the mean eGFR from at least two measurements more than 90 days apart, commencing with the date of the first value below 30 mL/min/1.73 m2. We defined the date of cohort entry (index date) as that of the final eGFR measurement included in the calculation of the mean value (index eGFR). When multiple eGFR measurements were available for a single day, we included the lowest value.

We excluded people who had undergone kidney replacement therapy before study entry, and those with one or more eGFR readings below 15 mL/min/1.73 m2 (ie, stage 5 CKD) before the episode that qualified them for study entry. We did not exclude people who may have had acute kidney injury, but we calculated a 3‐month rolling mean for inclusion and required a minimum of two years’ follow‐up, which would exclude most people with short term reductions in eGFR.

The primary outcomes of our study were kidney failure or first use of kidney replacement therapy, as reported to the Australia and New Zealand Dialysis and Transplant Registry (ANZDATA; https://www.anzdata.org.au/anzdata), and death, as recorded in the Tasmanian deaths registry. We report the risks of the primary outcome, expressed as a decimal number between 0 and 1, during the five years following diagnosis of stage 4 CKD.

Diabetes was identified in inpatient episode and cause of death records on the basis of ICD‐10‐AM diagnosis codes in relevant Elixhauser comorbidity groups (E10–E14; (Supporting Information, table 2), pathology data (glycosylated haemoglobin [HbA1c] > 48 mmol/mol or fasting glucose > 7.0 mmol/L), or recorded diabetes‐related cause of death. Cardiovascular disease (CVD) was identified on the basis of ICD‐10 diagnosis codes in relevant Elixhauser comorbidity groups (Supporting Information, table 3) and Australian Classification of Health Interventions CVD procedure codes (for people with admitted patient episodes; Supporting Information, table 4), or recorded CVD‐related cause of death. Only inpatient episodes, diagnoses, and procedures prior to or on the index date and during the subsequent five years were included. The lookback period for inclusion was to the first appearance of an individual in the dataset (maximum of eleven years prior to the index date). Age was defined as age at the diagnosis of stage 4 CKD.

We assessed associations of age group with the risks of kidney failure and death using the methodology described by Ravani and colleagues,5 to facilitate comparisons with overseas findings. We estimated crude cumulative incidence functions — the probability of an event attributable to a specific cause k at time t — for kidney failure and for death without kidney failure, with 95% confidence intervals (CIs), by age category.

The annual incidence of stage 4 CKD declined in each age group during 2004–2007 and has since been relatively stable; it increased markedly with age (Box 2). However, kidney replacement therapy was relatively infrequent among people aged 85 years or more (Supporting Information, figure 2, table 5).

Crude risks of kidney failure or death, by sex

Crude risks of kidney failure or death, by albuminuria status

Risks of kidney failure or death, stratified by comorbid diabetes and cardiovascular disease

The results of our sensitivity analyses, in which we varied the definition of kidney failure, were similar to those of our main analyses (Supporting Information, figures 3–5). We also examined risk of death, stratified by final eGFR value prior to death; kidney failure was reported as the cause of death for very few people, including for those with eGFR values below 10 mL/min/1.73 m2 (Box 7; Supporting Information, figures 6 and 7).

The relative importance of some mortality risk factors diminishes with age, while that of others, such as frailty, increases.12,13 This was reflected in our study: people over 65 years of age with stage 4 CKD were more likely to die than to experience kidney failure, suggesting that more people die with CKD rather than directly because of CKD. Organ‐specific guidelines, however, often do not take age into account, including those for the care of people with CKD.14 As kidney replacement therapy pathways are well defined and supported, disease management typically focuses on dialysis or transplantation; the pathway to supportive (non‐dialysis) care is less well defined, and differences between renal units are greater.15 As we concluded in an earlier study, mortality risks should be considered when discussing future kidney failure treatment options for patients over 65 years of age.16

We found that men over the age of 65 years were more likely than women to progress to kidney failure and to die within five years of diagnosis with stage 4 CKD; younger men were also more likely to experience kidney failure, but the risk of death was similar for both sexes. This finding is consistent with general population mortality rate differences between men and women, as well as the observation that CKD progresses more slowly in women.17 Treatment outcomes should therefore be reported by sex, and sex‐specific interventions developed.

Proteinuria was an important predictor of outcomes in our study: the 5‐year risk of kidney failure was greatest for people under 75 years of age with stage 4 CKD who had macroalbuminuria, and was very low for people without albuminuria or with microalbuminuria. Further, a considerable proportion of people under 65 for whom the urine albumin:creatinine ratio had not been assessed during the same calendar year as their diagnosis experienced kidney failure. This highlights the need to optimise the assessment of urinary albumin for the early detection and management of CKD.

The usual limitations of studies based on administrative datasets applied to our investigation. We did not have reliable data about ethnic background, and the applicability of our findings to Aboriginal and Torres Strait Islander people is consequently unknown. As we did not have information about people leaving Tasmania, we estimated loss to follow‐up by censoring data at 18 months after the last recorded eGFR result. Comorbid conditions were identified on the basis of recorded ICD‐10‐AM codes or pathology data, not diagnoses by medical practitioners. We did not have data for the 275 of 701 people commencing kidney replacement therapy without documented stage 4 CKD.

In this cohort of people in Australia with incident stage 4 CKD, the risk of death was greater than that of kidney failure for those aged 65 years or more. The 5‐year risk of kidney failure declined with age, and for people over 65 the risks of kidney failure and death were each greater for men than women. Clinical guidelines should recognise the competing risks of death from any cause and of kidney failure, and provide recommendations about holistic, supportive care rather than focusing on kidney replacement therapy alone. 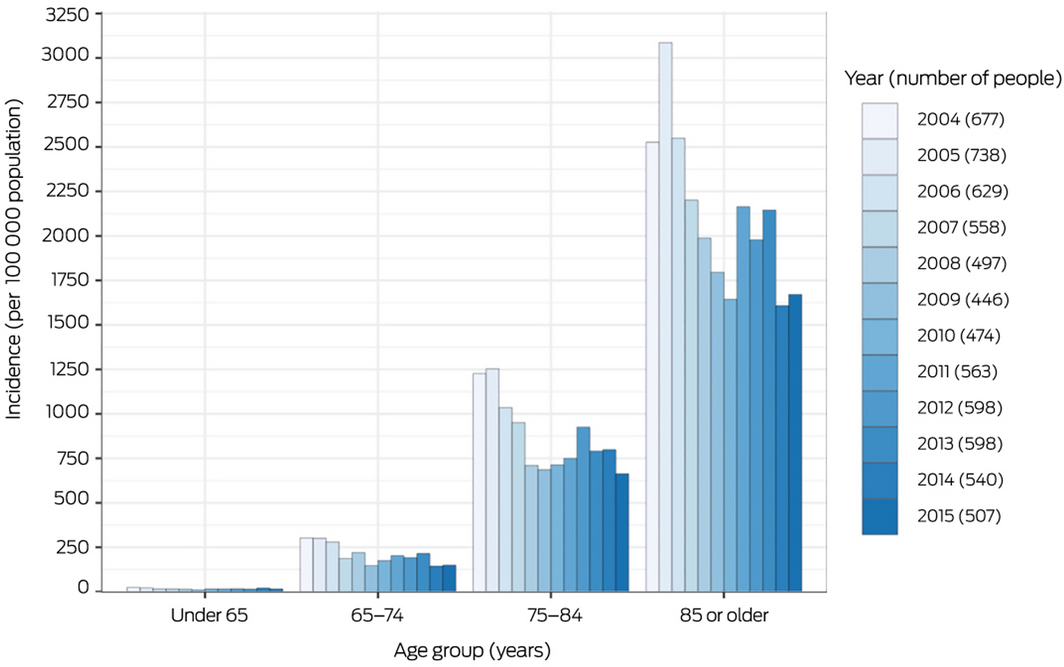 * The numerator is the number of people with a 90‐day moving mean eGFR of 15–29 mL/min/1.73 m2; the denominator is the estimated Tasmanian resident population for each age group.7 Incidence for 2016 and 2017 are not included as we required a minimum of two years’ follow‐up from diagnosis of stage 4 chronic kidney disease. 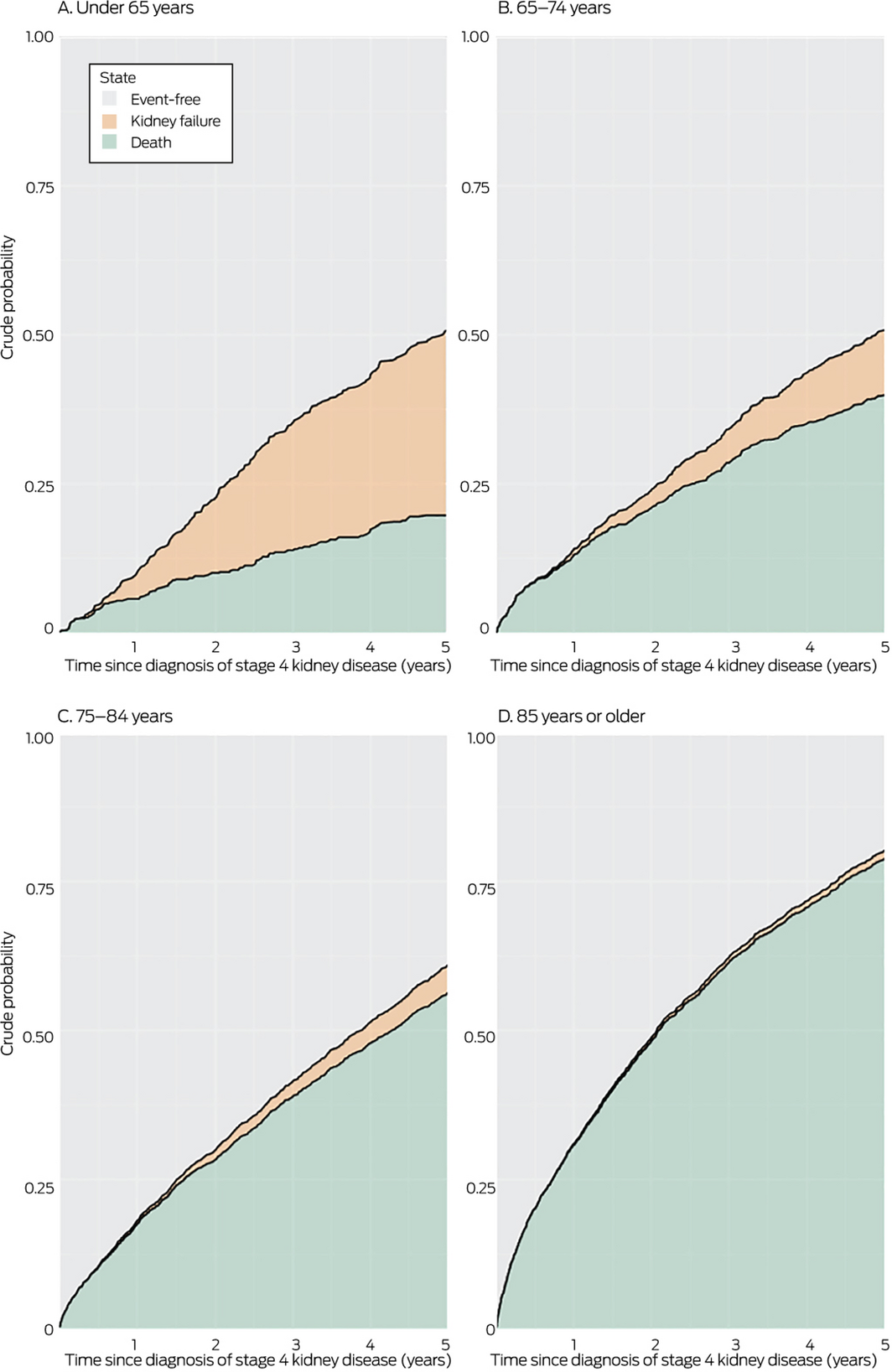 Box 4 – Crude risks of death or kidney failure (with or without kidney replacement therapy) within five years of diagnosis of stage 4 kidney disease, by sex and age group 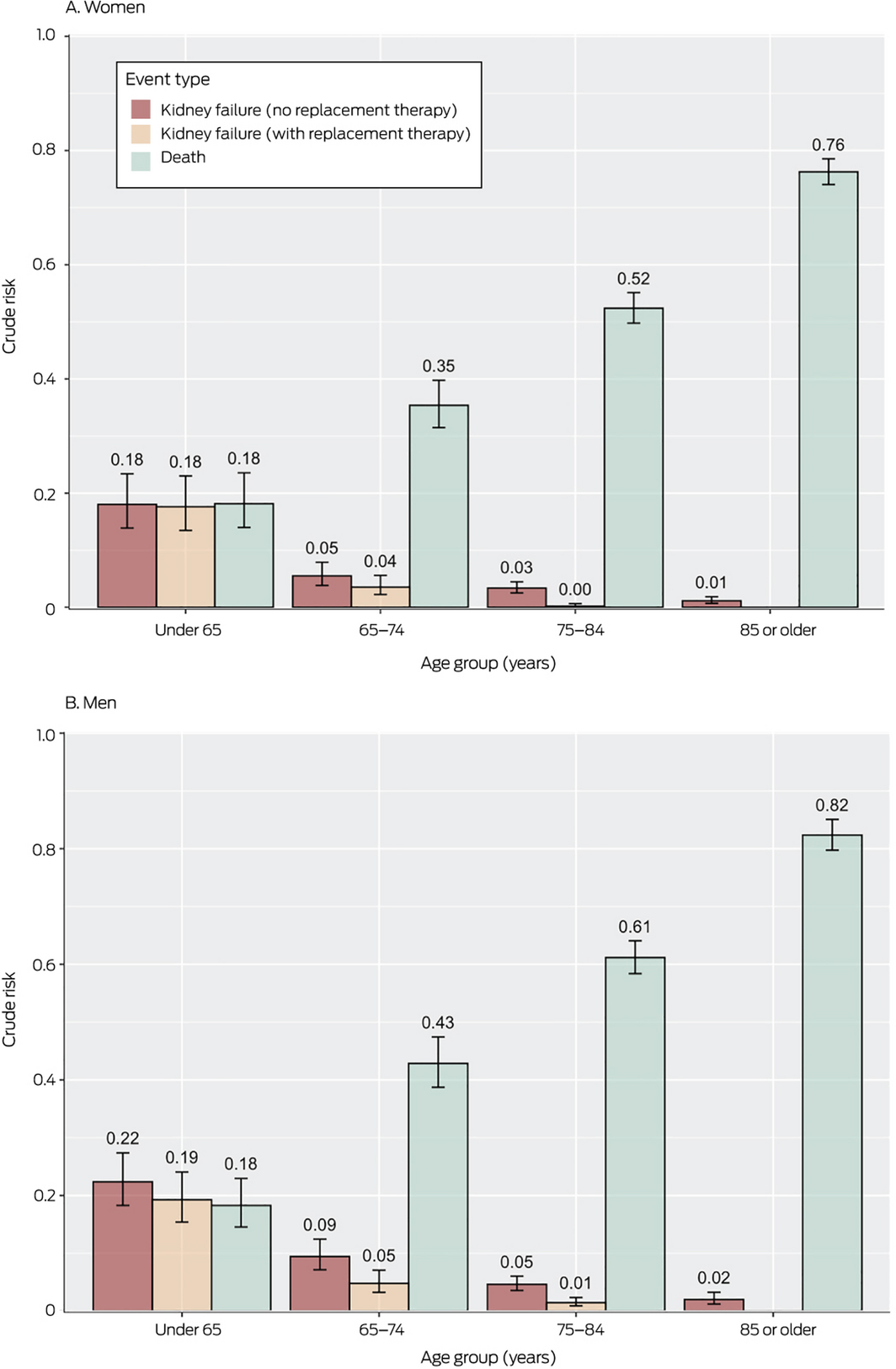 Box 5 – Crude risks of death or kidney failure within five years of diagnosis of stage 4 kidney disease, by albuminuria status and age group 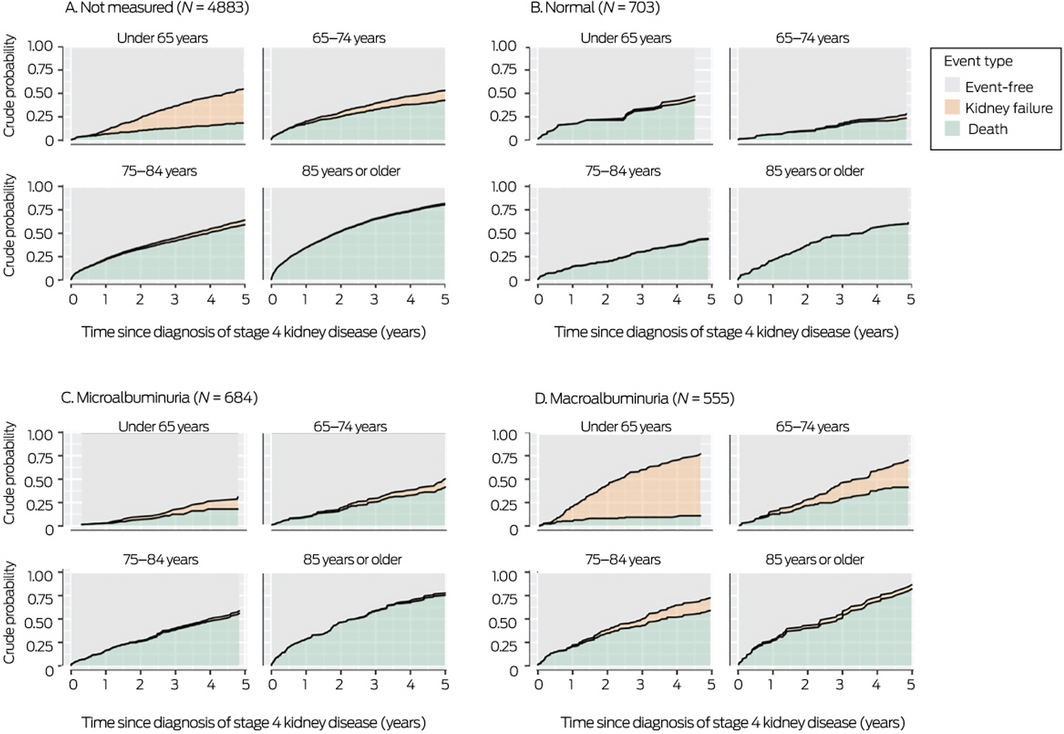 Box 6 – Probabilities and 5‐year risks of death and kidney failure within five years of diagnosis of stage 4 kidney disease, by age group and comorbid diabetes mellitus and cardiovascular disease (CVD)* 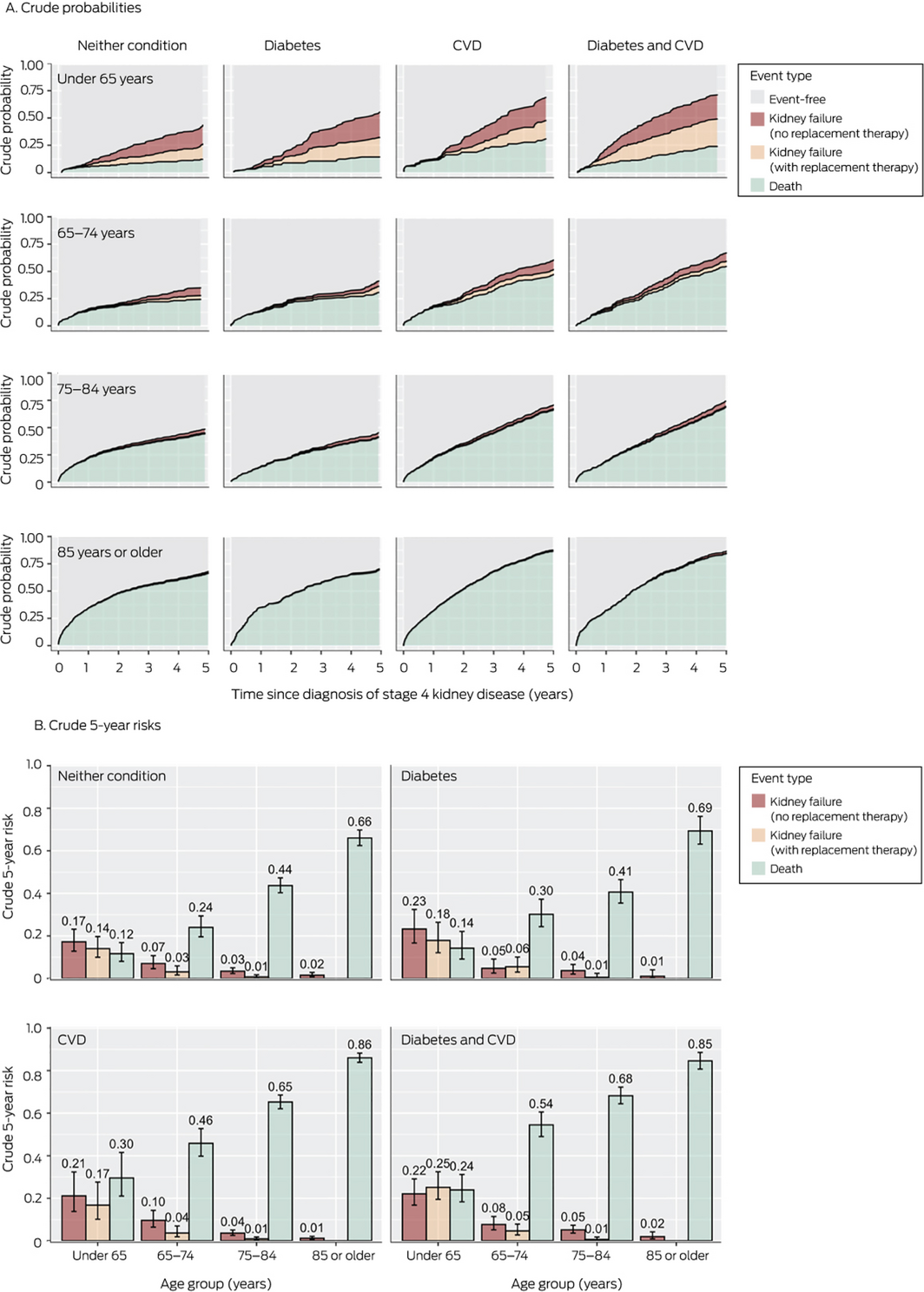 *For numbers of people in each category, see Supporting Information, table 6.

Box 7 – Outcomes during study period, with death stratified by final eGFR result prior to death

We thank Diagnostic Services and Pathology South for providing pathology data; the Tasmanian Department of Health for Tasmanian Public Hospital Admitted Patient and Emergency Department Presentations data; the Registry of Births, Deaths and Marriages (Tasmania), the Australian Coordinating Registry, and the National Coronial Information System for cause of death unit record file data; the Australia and New Zealand Dialysis and Transplant Registry (ANZDATA) for dialysis and transplantation data; and the Tasmanian Data Linkage Unit for undertaking linkage of these datasets. Some of the data reported were supplied by ANZDATA; the interpretation and reporting of these data are the responsibility of the authors and should not be regarded as official policy or an interpretation by ANZDATA.