The decline of invasive meningococcal disease and influenza in the time of COVID‐19: the silver linings of the pandemic playbook

Both influenza and invasive meningococcal disease (IMD) are recognised as diseases of crowding,1 a factor also identified as central to coronavirus disease 2019 (COVID‐19) transmission.2 Observations from military outbreaks published more than 100 years ago illustrate the impact of overcrowding on both meningococcal carriage and invasive disease, and the effects of simple public health strategies to improve hygiene that had substantive impact on both disease rates and mortality.3 In that landmark paper from 1918, six predisposing factors for IMD were observed: season, severe weather, antecedent epidemics of influenza, temporarily lowered resistance, overcrowding, and high carriage rates. This has held true for a century; and moreover, recent work from the United Kingdom correlates reductions in carriage‐promoting social behaviours with a reduction in IMD incidence, suggesting that public health policies aimed at influencing behaviour might further reduce this disease.4 These observations resonate in 2022 as we reflect on the impact of broad scale public health measures taken during the COVID‐19 pandemic.

In recent times, the interplay between IMD and influenza has become increasingly understood.5 This correlation was demonstrated in a multi‐country analysis of the coincident seasonality of both infections, and supported by evidence that surges in influenza infections were followed by acute increases in IMD incidence.6,7 Both infections are spread between humans in proximity. The nasopharyngeal epithelial injury associated with influenza infection secondary to neuraminidase or immune dysfunction may permit colonist Neisseria meningitidis to invade and cause disease.8

In a study of IMD and influenza peaks in the United States between 1989 and 2009, correlation was identified in 19 of 20 seasons, with influenza H3N2 and H1N1 peaks being highly synchronised while pandemic influenza H1N1, influenza B and respiratory syncytial virus peaks were not.5 Notably, spikes in case numbers of seasonal influenza are typically reported in winter, as are cases of IMD. The correlation of disease spikes in Australia of confirmed cases of these diseases is pronounced, with 33 of 36 statistically detectable IMD case count spikes at 6 standard deviations concordant with independently detected spike periods for influenza between 2006 and 2021 (Box 1).

In Australia, both IMD and influenza are notifiable to government under legislation, and in 2020 and 2021, coincident with the global COVID‐19 pandemic, both IMD and influenza case numbers were the lowest since records began. We posit that this reduction in case numbers can be attributed to the series of intersecting public health policies and practices, including COVID‐19 prevention. The corollary of these interventions was the substantial reduction in notifications of other transmissible diseases, including pertussis and invasive pneumococcal disease.9 Further, IMD and influenza vaccination programs that have been systematically rolled out across Australia have also been influential in disease control (Box 2).

Broad‐ranging public health policies were introduced in Australia in response to the emergence of COVID‐19. These aimed to limit the spread of the disease by improved hygiene and physical distancing. Policies that limited crowding, including education about and enforcement of personal and social distancing measures, limitations on gathering sizes, and school closures, were enacted to prevent person‐to‐person transmission. Additional state‐level border closures, and local‐level lockdowns relating to hotspots likely further hindered the movement of pathogens. International travel restrictions limited the importation of infections from overseas.

Given the pathophysiological association between influenza and N. meningitidis, it is perhaps not entirely unexpected that the implementation of COVID‐19 restrictions has had a muting effect on IMD cases. Before restrictions were implemented in Australia in March 2020, there were 12 cases of IMD reported in January 2020, 13 cases in February 2020, then six cases in March 2020.9 Following restrictions, there were on average < 7 cases per month for the remainder of 2020.9 For the corresponding first quarter period for 2021 (January to March), after the introduction of restrictions, the reported IMD case numbers were substantially lower than for the corresponding period in 2020, with 18 cases recorded.9 During years when spikes in influenza have been seen, IMD case numbers have been considerably higher.

The impact of COVID‐19 public health policies on influenza has been previously documented in Australia and overseas.10 The number of laboratory‐confirmed influenza notifications from Australia in 2020 was 21 354,9 and 748 in 2021 (personal communication, National Notifiable Diseases Surveillance System, Australian Government Department of Health), substantially less than the 313 465 cases detected in 2019.9 In 2020, the vast majority (94%; 20 061/21 354) of influenza cases were reported from January to March, before the broad public health strategies and policies were implemented against COVID‐19. Of note, rates of other viruses transmitted via the respiratory route also decreased, including measles, varicella and rubella.11

Impact of vaccination practices and policies in Australia on IMD rates

Meningococcal serogroup C vaccination has demonstrably reduced national IMD rates,12 with a National Immunisation Program (NIP) funded monovalent vaccine available since 2003. The effect has been considerable, with IMD notifications falling from a peak 3.5 cases per 100 000 population (in 2001 and 2002) to 0.8 cases per 100 000 in 2019, before the COVID‐19 pandemic.9 Since 2018, the change from monovalent serogroup C to serogroup A, C, W and Y vaccination expanded coverage on the NIP for infants and then adolescents.13 This change followed initial jurisdictional level responses to serogroup W outbreaks and an increase in serogroup Y disease from 2017.12

Meningococcal serogroup B vaccination has been registered for individuals aged 2 months and over since August 2013. From October 2018, it was funded for eligible children including those residing in South Australia, where serogroup B disease rates are high, and then to Aboriginal and Torres Strait Islander infants nationally via the NIP on 1 July 2020. As such, only a very small proportion of the population is vaccinated, and impact is small.

Implications for policy and practice in Australia and globally

The constellation of practices and policies in Australia targeting IMD and influenza over the past two decades, culminating in the extensive COVID‐19 public health measures commencing in 2020, coincided in the lowest rates of IMD and influenza since national records were kept. This outcome has likely manifested through a range of mechanisms. Several key public health lessons pertaining to these policies and practices have been learnt.

Additional lessons relate to the impact of public health measures targeting COVID‐19 that have had wider benefits in terms of reduction of transmissible diseases. The broad‐scale public education strategies aimed at disrupting transmission dynamics, including restricting travel, improving hand hygiene practices, physical distancing, improving ventilation of indoor spaces, and mask wearing, have directly or indirectly influenced case numbers. There is little doubt that general awareness of infection control principles and practices has been raised in the population. This reinforces recent findings that changing social behaviours might further reduce rates of IMD, and is consistent with the historic findings from controlled defence settings,3 but also demonstrates that reductions in case numbers can be achieved in a broader social context and on a far greater scale.

Lessons are still being learnt with regard to the impact of COVID‐19 itself on IMD. However, based on data available to date, there appears to be little firm evidence suggesting that COVID‐19 itself is associated with IMD, given the decline in IMD cases seen during the COVID‐19 pandemic period, and particularly during the surge of cases seen with SARS‐CoV‐2 variant of concern Omicron.

Moving forward, while the combination of factors that have driven IMD and influenza in Australia to their lowest levels on record in 2020 and 2021 may not continue to conspire, the public health lessons will hopefully not be forgotten. 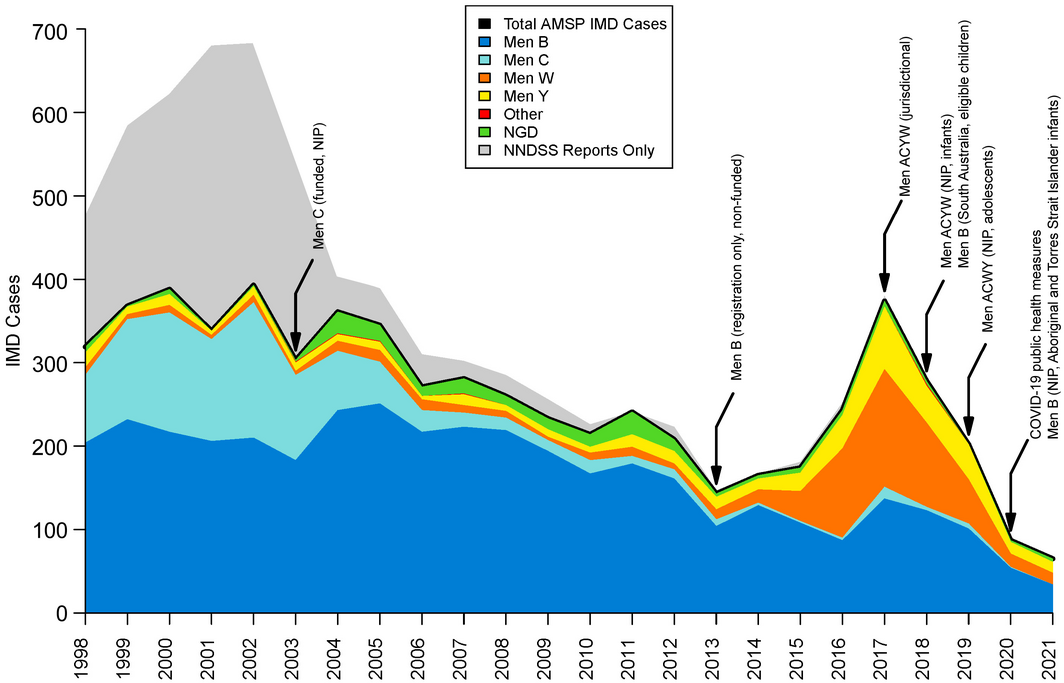